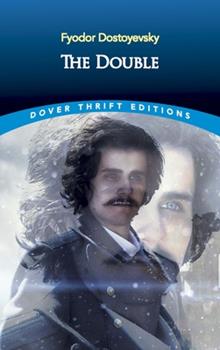 by Fyodor Dostoevsky and Garnett Fyodor

Most significant of the Russian novelist's early stories (1846) offers a straight-faced treatment of a hallucinatory theme. Golyadkin senior is a powerless target of persecution by Golyadkin junior, his double in almost every respect. Familiar Dostoyevskan themes of helplessness, victimization, scandal -- beautifully handled in this small masterpiece.

Published by Thriftbooks.com User , 13 years ago
I read one of Dostoyevsky's longer novels a few years ago and I got lost in it - a lot of names, really long, and confusing writing. The Double, I think is also a difficult read to the casual reader (like me) - it is a hazy line between fantasy and reality in The Double as other reviewers have aptly noted. But it is short (comparably at least) and the characters are easily discernible. I didn't follow everything, but enough to enjoy it. And enough to give me confidence to tackle his other short stories and then Brothers. As I believe is true of many of Dostoyevsky's characters, you will see traces of yourself in Golyadkin senior and junior - in the insecurities and indecisiveness to name a couple of his traits. For that reason, The Double is not only a interesting story but also a piece that forces the reader to introspect.

Published by Thriftbooks.com User , 17 years ago
Golyadkin is a government clerk who, decreed by fate, encounters a man who not only resembles him exactly but is also his namesake. Golyadkin's own musings and foreshadowing along with his curious actions all afford hints and glimpses of a psychological realism that persists throughout the novel. On a stormy night in which Golyadkin tried to regain his composure after the hails of slights had descended him at a private party of the high society, he met his double. The double (who was subsequently being referred as the Golyadkin junior and the adversary), with bold effrontery, went out his own way to show Golyadkin impudence, insulted Golyadkin, and purloined Golyadkin's papers in order to win approbation of the double's superiors at work. Like "Notes From Underground", "The Double" is a close examination of human consciousness, through an unreliable narrator. I repeatedly raise the question whether this imposture really happens? Does the Golyadkin junior (the double) really exist in cold fact? What really happens at the end? Perhaps the real horror of Golyadkin senior (whom Dostoyevsky eventually refers him as our hero) is that he unconsciously knows his double simply being the side of his own nature that he disapproves, despises and fears? Regardless of the existence of the double, the imposter has simply trampled Golyadkin in the mire, perfidiously intruded him, and showed clearly that the senior and also the genuine Golyadkin is not genuine at all but a counterfeit, and that Golyadkin junior himself is the real one. The book is a portrait of the darker side of despicable personality that magnifies to the full actuality. 2000 (6)

Published by Thriftbooks.com User , 19 years ago
Mr Golyadkin is something of an odd fish. He hires a carriage to take himself to a party he has not been invited to, only to retreat from an attack of nerves before he is even halfway there. Following an abortive trip to his doctor (who doesn't appear to like him very much), he goes shopping. Or at least he attempts to create the impression of shopping (in that he enters several shops, makes a lot of noise and invariably leaves without having made a transaction). You learn one or two things about Golyadkin pretty quickly. He appears to have enemies. Or at least, he refers to his enemies (and thinks about his enemies) quite a lot. There is also a woman somewhere thereabouts in the shadows who may or may not believe that Golyadkin has wronged her. Way before any double appears on the scene, you understand that (a) Golyadkin is an odd fish and (b) you should not quite trust everything he tells you. There is something more than a little neurotic about Golyadkin, and that sense of unease only increases as you read. It is like you find yourself in the middle of a crowd (and it is like you have been asleep), and there are people all around. There are so many people that you cannot see beyond them. You do not know where you are. You just know that you are in the midst of people. Next thing, they have their hands on you. There are hands on your arms and hands on your legs and feet. You find yourself hoisted off the ground as the people around you start to swing your body as if they thought you were a hammock. You have no control over anything. They swing you backward and forward, each arc hoisting you just that bity higher. When you think you cannot go any higher, they let you go and you fly, out over the top of the crowd and into the sea. It isn't until you hit the sea that you realise you cannot swim. That feeling (the tension, the lack of control, the blank incomprehension) sits on your shoulder like an enormous black bird all the time you are reading "The Double." Golyadkin sneaks into the party he was not invited to, and finds himself rather rudely ejected. Wandering through a stormy night (a storm akin to the fog that opens "Bleak House"), he sees another version of himself and gives chase. The phantom Golyadkin appears again at work the following morning. Only it is not a phantom. It is another man. Just because the man shares his face and his name, just because the man happens to have been born in the same place. There is no need to worry. It is all just coincidence. (You can hear Golyadkin reassuring himself.) Only it seems he does have reason to worry. His job is under threat. People look at him oddly. He does not understand what it going on (and we, as readers, share the puzzle with him: why is everybody behaving so oddly?).This is an oddly contemporary nightmare, the story of a man lost in the fog of the modern world. Whatever your expectations of this book (or for that matter Dostoyevsky), you will be surpr

Published by Thriftbooks.com User , 20 years ago
Dostoevsky's second novel comes pretty late in the day of the first European doppelganger/double cycle. it's the usual thing - a complacently respectable civil servant, Mr. Golyadkin, is publicly humiliated. Soon, an exact replica of himself enters his life, receiving undeserved favour from the hero's superiors, while behaving atrociously and getting Golyadkin blamed. Does the second Golyadkin really exist? Does he represent the hero's dark side, the Id lurking in his subconscious, performing the transgressions his bourgeois public persona would dare not? Is it all a nightmare? Is Golyadkin a schizophrenic? Mad? All par for the course.The novel's subtitle gives a clue to its real worth - 'a poem of St. Petersburg'. Dostoevsky's descriptions of this snow- and wind-lashed city, with its dank, claustrophobic, labyrinthine streets, squelching with mud, its menacing tenements and restaurants, and the bordering restless, gloomy river, are a vivid backdrop to Golyadkin's circular nightmare - the storm scene when he discovers his double is an atmospheric tour de force. Dostoevsky's style in this novel was apparently modelled on Gogol - certainly it is immediate, intrusive, sarcastic, ironic, bathetic, fast, very funny, yet always unsettling, even poetic. Golyadkin should deserve our sympathy, yet his self-importance, long-windedness and cowardice are rendered comically ridiculous, and from the beginning, with the strange ball, the elliptical narrative and ambiguous point of view, the reader's sympathies and interpretations are constantly shifting. Written in 1846, before the arrest and spiritual crisis, there is no contrived redemption here, and the novel's resolution is more satisfying than some of the later work's, although the author himself was surely right when he said later that the first half is far superior to the second. Best of all are the public set-pieces that frame Golyadkin's identity crisis. (I recommend Jessie Coulson's fluid Penguin translation, which, a few infelicities aside, captures something of the book's rapidity and playfulness).

A novel way ahead of its time

Published by Thriftbooks.com User , 22 years ago
The Double was Dostoyevskys second book. The author thought it was his greatest work yet, but to the literary critics, who considered it weird and insane, it was a disappointment. This was not strange, because D. had really started to explore new territories of the human mind. The language and style was close to that of Gogol, but what D. wrote here was simply revolutionary! He describes insanity from within, a person who is followed by a double through the cold streets of StPetersburg. It's no wonder this book amazed Freud and the psycho-analysts of the 20th century. You can also clearly see who Kafka learned from... However, this is a great book and it is invaluable if you want to get further into the genius of Fyodor Dostoyevsky.

 Mentions in Our Blog 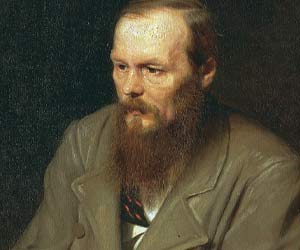