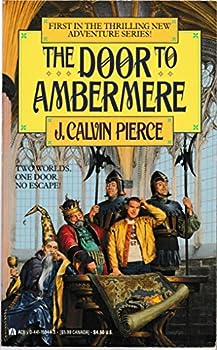 (Book #1 in the Ambermere Series)

A down-on-his-luck gambler swings through a barroom door and finds himself in a tavern of the magical realm of Ambermere where he must rescue a kidnapped princess and return to his home before a demon... This description may be from another edition of this product.

I HIGHLY recommend this book and series for fantasy readers!

Published by Thriftbooks.com User , 21 years ago
This is the 1st book of a currently 3 book series, but there is NO REASON why the series should end there -- and I greatly hope it gets continued. The next is Sorceress of Ambermere. My detailed rating would be 4.6 for this book. This book seems to really be more of an intro to the characters and universe of Ambermere. I personally started on the second book, and I may recommend that to future readers. I'm having a hard time describing what makes the series great. I could say, it just is! But partially, there is an incredible amount of imagination here. I've never read anything like it. The combination/contrast of magic use with the everyday typical city life of New York is hilarious! And the characters in these books are wonderful. Rogan the Obscure is a huge laugh. And Alexander is great! Also, there is something uniquely satisfying when you watch good people gain power(s). This book equally mixes Marcia's story with Daniel's. Marcia is the protagonist in the future books. Daniel becomes a bit character later, but his adventures here are entertaining and could serve to get you into the series. This series deserves to be widely read!
Copyright © 2022 Thriftbooks.com Terms of Use | Privacy Policy | Do Not Sell My Personal Information | Accessibility Statement
ThriftBooks® and the ThriftBooks® logo are registered trademarks of Thrift Books Global, LLC