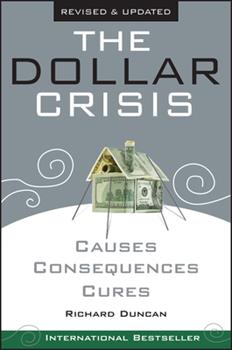 In this updated, second edition of the highly acclaimed international best seller, The Dollar Crisis: Causes, Consequences, Cures , Richard Duncan describes the flaws in the international monetary system that have destabilized the global economy and that may soon culminate in a deflation-induced worldwide economic slump. The Dollar Crisis is divided into five parts: Part One describes how the US trade deficits, which now exceed US$1 million a minute,...

Not just doom and gloom

Published by Thriftbooks.com User , 16 years ago
As a non-economist I found "The Dollar Crisis" extremely informative as to how things actually work. Many of the topics discussed are playing out in our economy right now. Ever wonder why interest rates are creeping down to historic lows while the Fed has raised rates nine consecutive times? This explains that and much more. A must read for anyone trying to get a handle on what our economy is doing and how it works.

The Dollar Crisis is Just One Crisis Facing the World

Published by Thriftbooks.com User , 16 years ago
The basic thesis of this book is easily stated in a few short sentences: The world is on a United States Dollar standard. The dollar standard is inherently flawed and increasingly unstable. Its collapse will be the most important economic event of the twenty-first century. Mr. Duncan is based in Asia and has a first hand view of what he is talking about as well as the theoretical background to understand what's happening. Or at least he has a different view than we have here. ==His comments from a strictly monetary standpoint are pretty good. But I'm afraid that his conclusions don't quite agree with mine. First, one thing he urges as at least a partial solution is a Global Minimum Wage. You gotta be kidding. France can't even agree with the rest of Europe on how to do things. Are you really saying that the kid in Zimbabwe driving an ox team dragging firewood is to get paid the same as someone working in a factory in Taiwan? Second, he doesn't spend nearly enough time on the coming oil crisis. Today oil is $65 a barrel. The biggest 'economic event of the twenty-first century' is going to be the change in our entire culture as oil goes to $165 then $265 a barrel. The whole economic situation of the world changes as transportation has to change. It costs about $3,000 to bring over one of those 40 foot containers from Asia. What if that goes to $30,000? What happens to the economics of Asian manufacturing? The dollar crisis is just one of the fun and exciting things we have to look forward to in the next few years.

If you want to understand what's going on, buy this book.

Published by Thriftbooks.com User , 17 years ago
This was a very informative book for me, although I would recommend it only for those who have a reasonable understanding of economics, and who are familiar with international trade, foreign exchange, and Keynesian and monetarist theories. The author does explain these things, but you really need to know about them beforehand. The data and charts the author uses to inform the reader about what is going on in global trade and finance are impressive. I would wager that a book like this would have been impossible before the advent of readily available computer data. There is some repetition in the book, however, but it is convenient repetition. Before reading this book, I was aware of the problems the endless U.S. trade deficits are creating. However I was not aware of just how pervasive the problem is, and how one country after another gets hit hard by a powerful financial crisis followed by an intractable economic contraction. First the exporting countries get hit. An export country normally recycles most of its dollar surplus back into U.S. investments. What this means is that the U.S. pays for the excess goods it imports by selling either debt instruments, or real property, to the exporting country. But also, enough of the export country's dollar surplus gets converted into the local currency to cause a stock market and real estate boom and a rising currency. An example was Japan in the 80s: up and up went the markets, while the exporters were having an increasingly difficult time making a profit, because of the increasing local costs and an increasing currency exchange rate. Finally, the high stock market levels can no longer be justified and balloon goes pop, and we have a mess that can take a decade or more to clean up, as in Japan. And the author gives a convincing case for why China will be next on the hit list. The importing country, the U.S., in turn gets hit too. The recycled dollars from the exporting nations fuel a stock market boom, as in the 90s, with lots of new IPOs and new industrial capacity being created--and over capacity too. At the same time, U.S. companies, finding it ever harder to sell at home in the face of the ever rising tide of cheap imports, find themselves making smaller profits, and so less able to justify their stock prices. The collapse becomes inevitable, and happened starting in 2000. But what made this book an eye-opener for me is the author's well documented argument that we have experienced only Phase One of the U.S. contraction, in which the Fed reacts to the contraction by reducing interest rates drastically, and so mortgage interest rates, and so fuels a counteracting housing boom. Now, the contraction in each country that's hit is intractable, the author asserts, taking a decade or more to recover from, and none of the reviews posted on this website seem to have made any comment on the author's prediction that Phase Two of the U.S. contraction is therefore still to come. All that is covered

Published by Thriftbooks.com User , 18 years ago
Richard Duncan's "The Dollar Crisis" is written in a fairly straightforward manner. It is a distillation of ideas about the monetary system, and facts and figures and examples. He tries to highlight key facts and ideas, and repeat them sufficiently so you won't miss them. In this sense its rather good for someone who is not a specialist in this area, or has not been exposed lately to some of the concepts of international monetary exchange. I have an MBA, and a solid background in economics, and found the level to be just a little tedious in places but overall very good for review, and adequate for refreshing my memory. It may not appeal to readers with no experience in economics or financial matters, since they will need an introduction to what money really is all about, and how an economy functions. It will also not appeal to dogmatic economists, but then, nothing but their own schools ever do anyway. I am rather enjoying the book, and recommend it to anyone who wishes to delve further into the impact of the money system on macroeconomics and the world's finances, beyond the decision for 'the next trade.' This book is helping me to think about the dollar as a 'medium of exchange' in a more theoretical manner. It is helping me to focus some of my own thoughts on the subject, and provided a good of the international accounting system. We really are in uncharted waters. Never before in history has the world had a 'reserve currency' that is relatively unrestrained, with a 'master' who is willing and able to debase it to suit their policy needs, and manipulate markets in concert with their peers to prolong the situation and defeat the regulating systems of the markets, such as interest rates and exchange values. We are in a feedback loop of mutually assured financial destruction with Asia. We are supporting their economies by consuming their exports in a huge way, and they in turn are accepting our debt instruments (dollars) and using them to expand their own economies, as well as our own by buying our Treasuries, Corp bonds, GSE debt, and equities. It seems like an endless round of bubbles have been created as the Fed seeks to avoid crises and keep this Ponzi scheme going, because that's exactly what the dollar is these days. Make no mistake about that. It sets out some of the timelines nicely with the appropriate facts and figures, and helped me to understand the progression of events and the key decision points. I don't think of Mr. Duncan as an Austrian, since in the first half he avoids the dogmatism that Austrians often fall into, which is the weakness of a theory that has never been tested and refined, while being academically marginalized. Since I am an 'Austrian' you can take that as a sincere criticism if you are so inclined.As far as his solutions, I won't comment because I do not wish to give away the ending as they say, and I wish to highlight the book for its value in helping the reader organize a complex reality into some manageable

Published by Thriftbooks.com User , 18 years ago
For the uninformed, semi-informed or even the informed who are willing to connect the dots about today's seemingly strange economic times, this book will guarantee a cold sweat. Duncan's book is a comprehensive, one stop portrayal of the prevailing bubble economics that have dominated the planet over the last decade. That process is currently running full tilt and seems terminal. He presents (sometimes redundantly, but bears repeating) the mechanics and impacts of the massive Dollar recycling operations (engendered by America's 5% of GDP trade imbalance: $500 billion plus annually). This in turn creates malallocations of capital, overcapacity, and rolling asset bubbles and busts, that regularly require costly bailouts and cleanup operations. Of course the bailouts are affected by applying even more "liquidity" in the form of more dollars and debt that the world (and especially the US) sorely does NOT need. This monetarism encourages even more moral hazard and bizarre economic behavior (borrowing against inflated assets such a homes to buy even more foreign made goods). The strength of Duncan's book lies in his use of an excellent set of tables and graphics, that allow the reader to piece together the variables and evolution of the dollar and credit bubble. He also offers a clear and concise snapshot of the history of several late 20th century bubbles such as Thailand, Japan and the United States. Additionally an understandable description and history of the reserve system of international trade and capital flow is presented. As the book was writtten in June, 2002, the inquistive reader may be tempted to try and update the book's data. The updates can be tracked by going straight to the sources (Federal Reserve flow of funds data, etc.)that Duncan provides. I can only advise the reader to take anti-nausea medication and skip lunch during this process, as the picture is not pretty.
Trustpilot
Copyright © 2022 Thriftbooks.com Terms of Use | Privacy Policy | Do Not Sell My Personal Information | Accessibility Statement
ThriftBooks® and the ThriftBooks® logo are registered trademarks of Thrift Books Global, LLC