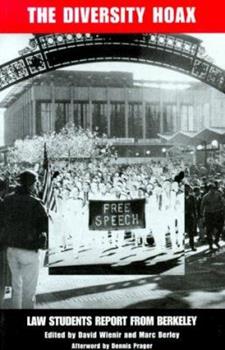 by David Wienir and Marc Berley

The Diversity Hoax is a book about diversity on campus, written by those who know it best - students. Does diversity of ideas prevail? A remarkable collection of essays on the subject of intellectual... This description may be from another edition of this product.

The Problem with Orchestrated Diversity

Published by Thriftbooks.com User , 21 years ago
First of all, I'd like to say: 1) I have not read all the other reviews here, 2) I am not - and never will be - a law student and, 3) I do not hold a four-year college degree (yet). I am a regular person who enjoys non-fiction. I am also a "minority" who resides in California. I highly recommend this book. It was very engaging and easy to read. I was fascinated and engrossed by these essays. I was also dismayed at the realization of the state of our institutions of higher learning. This book had a huge amount of relevance to me personally, because I have often been puzzled by the way liberal society has attempted to orchestrate diversity. Throughout history, minorities (including women) have fought bitterly to be treated "equally" and yet they've subjugated themselves to something as unbalanced and prejudicial as affirmative action. In all my life I would never dream of demeaning the blood, sweat and tears of my grandparents, who worked exhaustively as migrant farm workers in Central California, by accepting a decree that basically says I am not capable of succeeding because of my ethnicity. I currently live in a small city with a high Hispanic populace. There is constant raging debate at the city government level about Hispanic representation. A small but vocal (much like the protesters in this book) group has instigated a lawsuit through the Justice Department, seeking to divide our puny city into voter districts in order to allow more Hispanics to be voted onto our city council. But I assure you, race is not the issue, politics is the issue. I am fully Hispanic, but theoretically, if I were to run for office and be elected, I guarantee that I would be politically dismissed by that small but vocal group! This mentality is everywhere. Unfortunately, it will continue to grow unless more books like this are written and read.

A "must read" for anyone who cares about true diversity

Published by Thriftbooks.com User , 23 years ago
Wienir and Berley's "Diversity Hoax" provides a disheartening glimpse into the state of American higher education. It illustrates the hyperbole and closed mindedness that passes for free thought and reasoned discourse at Berkeley. But more importantly, "The Diversity Hoax" exposes the current gilded notion of "diversity" for what it is. Berkeley students, professors, and administration evidently celebrate diversity of skin while shunning diversity of thought. Currently a senior in high school and aspiring lawyer, I will soon face the seemingly Sisyphian task of standing up to the radical liberalism so prevalent on college campuses. I only hope that I will have the same courage as Wienir and Berley to speak my mind and fight for true diversity.

Published by Thriftbooks.com User , 23 years ago
A lucid, well-written and concise exploration into the styfling intellectual environment at one of America's top law schools, UC Berkeley's Boalt Hall. These student-written essays--in which many of the authors self-identify as liberals--are replete with anecdotal and factually verifiable stories of the systematic oppression of free speech which ironically takes place at the epicenter of the free speech movement of the 1960s, UC Berkeley. These essays not only expose the slanderous tactics of the student left, but also advocate a more modern and progressive concept of "diversity," one in which ideas are adjudged based on their content regardless of the speaker's skin tone.A must read.

An enlightening, powerful collection of essays

Published by Thriftbooks.com User , 23 years ago
"How many Asians currently play in the NBA? Are they under-represented? If so, why is this tolerated, and what must *WE* do to remedy this grievous situation?"These absurd questions are not so absurd, at least according to the Leftist PC-police who rule the roost at Boalt Hall (UC Berkeley's prestigious law school). A straightforward, powerful, often-disturbing collection of essays by Boalt students, "The Diversity Hoax" questions the self-serving notions of "diversity," "minority," and "racism" from the ultra-liberal perspective. Readers lucky enough to pick up this volume are left with little doubt that far too many students--and far too many educators and administrators--at Boalt view any opinion or individual outside of their narrow view of "tolerance" with extreme intolerance.Why does Boalt's definition of "diversity" refer only to racial diversity? Why do Boalt professors and administrators turn a deaf ear and a blind eye in the face of blatant personal attacks on those who have the `audacity' to express themselves from anything but a ultra-liberal perspective? Why is the eternal message of Dr. Martin Luther King, Jr. ignored by those who hold his words most sacred?The answers to these and other questions contained in this powerful little volume, though certainly debatable, make this collection a fascinating read. Compiled by David Wienir (a second-year law student at Boalt) and Marc Berley, "The Diversity Hoax" is as provocative as its title. After reading this book, I am far more aware of the close-minded intolerance practiced by those who most vocally preach "tolerance."I heartily recommend "The Diversity Hoax" to anyone who has ever had the courage to express their "minority" views (take that either way) to a hostile crowd, to those who have been shamed and silenced by the same, and to people of all ethnic backgrounds who want a fresh perspective on the true meaning of diversity and racism. Don't pass this up; it's a keeper.
Trustpilot
Copyright © 2022 Thriftbooks.com Terms of Use | Privacy Policy | Do Not Sell My Personal Information | Cookie Preferences | Accessibility Statement
ThriftBooks® and the ThriftBooks® logo are registered trademarks of Thrift Books Global, LLC