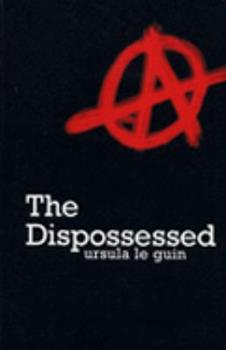 (Book #6 in the Hainish Cycle Series)

This description may be from another edition of this product. "One of the greats....Not just a science fiction writer; a literary icon." - Stephen King From the brilliant and award-winning author Ursula K. Le Guin comes a classic tale of two planets torn apart...

No bosses, no bankers, no owners, no wars...

Published by Thriftbooks.com User , 15 years ago
There is no better work of fiction that describes what a society based on true anarchy might be like. You soon see that it certainly would not be chaos. That is because a society without leaders and laws is not a society without order- it is just that the order comes from within. That is true order. People work and sacrifice because they recognize that it is in everybody's best interest. Society should be brotherhood of equals, a big family. In a sense, the world of Anarres reminded me of one great farm where family members realize from an early age that they are needed for work that must be done. Either that, or I would describe it as an old-style kibbutz on a planetary scale. It isn't a perfect system. Vigilance is needed to make sure that unofficial tyranny from peer pressure and individual corruption do not set in, but it comes across as workable and believable. As for her sister world, Urras, it is a place of both the plutocratic-oligarchic state, as well as, the centralized communist dictatorship, locked in perpetual struggle. It is a world where men are forced and coerced to obey their leaders. It is our world. Urras is archism, Anarres is anarchism. You are forced to examine first hand the fundamental differences. It is the difference between a society of true individuals and a society of slaves. The hero, Shevek, is both a physicist and a philosopher. His was a mind capable of reconciling not only the seeming incompatibility of the simultaneous and sequential nature of time, but also of the conflicting drives of human nature. Both required the freedom of mind of a true revolutionary. I first read this novel over 25 years ago. It came as a shock to me to realize how much I must have internalized the character of Shevek.

Published by Thriftbooks.com User , 16 years ago
Like her Left Hand Of Darkness, Le Guin's Dispossessed is a sharp commentary on the insanities of human society. Yet what has stayed with me over the years since I first met Shevek is the integrity of this truly good man who stands firm in what he believes. While Le Guin pulls no punches when it comes to deprivation and human pain, I finished the book with a sense of hope for a hopeless world.

Published by Thriftbooks.com User , 17 years ago
The Dispossessed is one of my favourite books - one that almost always gets re-read when I pick it up just by accident. Ursula K. Leguin does construct a world for utopians; but this world is not really a conventional utopia. Our united suffering is one of the key themes, and while the book is often explaned in terms of its idealology, it shines in its personal relationships. I love Shevek, I love Shevek and Takver together, I love Dap with Shevek's younger daughter. Ursula K. Leguin can explore difficult ideas with a flowing style that never makes you think you are being preached or pandered to.

Published by Thriftbooks.com User , 18 years ago
Whether or not THE DISPOSSESED passes as good sci-fi, I know not. I am not very knowledgeable of what SF fans look for in a book. As a novel, and as a philosophical exploration of authoritarianism, anarchism, capitalism, communism, revolution and utopianism -- this book is first-rate. The questions Le Guin grapples with here are by no means simple. Even great philosophers, like Marx and Bakunin, had difficultly imagining what an ACTUAL society would look like without bosses and owners. But through the gripping tale of an anarchist caught between two fundamentally different worlds, Le Guin seeks answers to many of the questions these philosophers left untouched. How would an anarchist society function? What would it take as its fundamental principles? What problems would that society have? What would a "propertarian" capitalist society appear from the perspective of an anarchist? Without offering any quick or final answers, Le Guin sheds light on these issues and beckons the reader to imagine the possibility of another world. After all, the evolution of culture here on planet earth was why Le Guin wrote this book in the first place. Inspiring, moving and transformative, this book was a pleasure. Thank you, Ursula. You have successfully removed another brick from the wall.

Published by Thriftbooks.com User , 19 years ago
"To break a promise is to deny the reality of the past; therefore it is to deny the hope of a real future." -- one of the more pertinent observations made in this outstanding book, one I found myself thinking about more than any other after reading it. Otherwise "The Dispossessed" is, among other things, an exploration of utopias, political systems and the politics of utopias. As usual Le Guin wraps all of these otherwise tiresome sounding political/philosophical themes into a very engaging SF story, with outstanding characters and a generally plausible storyline. It also falls among Le Guin's many books that subtly dissect humankind's rather high opinion of itself. . .

The Dispossessed Mentions in Our Blog