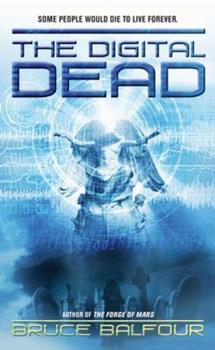 Bruce Balfour, the acclaimed author of The Forge of Mars, brings us to a future age in which virtual versions of the dead control the desires of those they've left behind-with terrifying results.

Published by Thriftbooks.com User , 18 years ago
This novel is the sequel to THE FORGE OF MARS, you should probably read it first before reading THE DIGITAL DEAD, but it is'nt entirely necessary. This new novel continues the adventures of NASA nanotechnologist Tau Wolfsinger and his girlfriend Kate McCloud, after returning to Earth from Mars. Also included here is a man with great political ambition who will stop at nothing to achieve his political ends. Much of this novel occurs in cyberpace, and author Bruce Balfour does an admirable job in making it realistic, he himself is an A.I. expert at NASA, his scientific background is well evident in this 'all too possible' hard science fiction tale, taking place several decades in the future. In this novel, Balfour touches several times on the subject of technological immortality, and he gives readers an entirely plausible method of actuating it, in a few decades something very similar may take place, fascinating stuff indeed. All the characters in this novel are fully formed and believable, inside an excellent plot, in an easy to read style, well worth reading. Everything, including the politics, are complicated by alien technology not fully understood, but no more potential spoilers...

Published by Thriftbooks.com User , 18 years ago
I liked THE FORGE OF MARS, but Balfour's new book THE DIGITAL DEAD really delivered the goods. His style reminds me of William Gibson because it's a thriller set in the near future and it has a more literary tone than a lot of books of this type. He takes a new spin on the concept of immortality and injects an extrapolation of how powerful politicians would make use of such life-changing technology for their own benefit. Although he refers to his last book, and uses a couple of the characters from last time, this one is mostly set in San Francisco and has only a few connections to the previous story. But this one was great, and I just bought two more to give to some people who really ought to be thinking about these subjects. Balfour's vision of a world in the making promises to become a classic, and may even become a reality sooner than we think.

Published by Thriftbooks.com User , 18 years ago
The trip to Mars for scientist Tau Wolfsinger and his fiancee archeologist Kate McCloud was anything but restful. They met an alien race in the ruins of Mars and the Russian General Zhukau of the Red Star Base tried to take over the American colony and use the Gwrinydd technology to dominate Earth. The Gwrinydd Free Mental AI who calls himself Thoth almost killed Kate when he established a mental link with her.Now that they are back on Earth, the duo are on an extended vacation, needing to relax after they saved the world and made some amazing scientific finds. Unfortunately their vacation doesn't last very long because someone is trying to kill them. They manage to escape and Kate is sent to the Urals where some Gwrinydd markings have been found as well as a transportation portal. Back in America, Tau is trying to elude his pursuers but the prey becomes the hunter when they torture and kill his father in their effort to find him. During his mission, he acquires some interesting allies sworn to help Tau or die trying.Tau is a naive genius who is so unworldly that readers will adore him and hope that he outwits the people who want to acquire the knowledge that he gained on Mars. Conspiracy fans will think the plot of this science fiction thriller is very plausible. Other readers will enjoy the action scenes and the concept that all facets of a personality can be stored in a biochip so that when a person dies he or she can be restored to digital life.Harriet Klausner

Another facinating spiderweb from Balfour!

Published by Thriftbooks.com User , 18 years ago
Balfour has composed another intelligent and intriguing work of science fiction. His complex heroes, Tao and Kate, return with a host of creative new characters. The novel calls to mind the grandeur of the great science fiction authors without being derivative. This book is a true page turner; once picked up it cannot be put down. I would recommend it both to long term science fiction fans, who will find it a breath of fresh air from the cliches of the genre, and to new readers, who will find it a fascinating introduction.

Read this book! It's wonderful

Published by Thriftbooks.com User , 18 years ago
I've been waiting anxiously for this book since last fall, when I read and loved *The Forge of Mars*. I'm happy to say my anticipation has been rewarded and my expectations exceeded.This book is NOT a sequel. Some of the main characters reappear, but the plot doesn't depend on the events of *Forge* -- you can read *Dead* without knowing a thing about *Forge* and still "get it." Tau and Kate are back, but they're joined by new characters who drive the action to a great extent. Everyone is caught up in a conspiracy to control the minds of Americans in an attempt to stage a bloodless coup (sound familiar?). Oh yes, and my favorite character, Yvette, is back and badder than ever.Balfour's women characters are strong and sassy, and his men are average guys, not cardboard cut-out superheroes who have to win because they're so superior to everyone else. Tau is endearing and funny, and his adoration of Kate is touching and perfect.The events in *Dead* are chilling because they're so plausible. The science is based in reality, and so is the ruthlessness of powerful men. The book is a cautionary tale, but it's also a lively, entertaining read. I'm already looking forward to Balfour's next one.
Trustpilot
Copyright © 2022 Thriftbooks.com Terms of Use | Privacy Policy | Do Not Sell My Personal Information | Accessibility Statement
ThriftBooks® and the ThriftBooks® logo are registered trademarks of Thrift Books Global, LLC