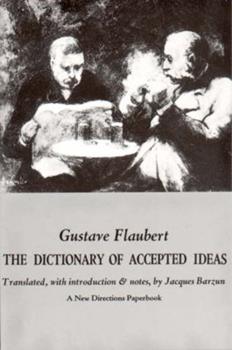 Throughout his life Flaubert made it a game to eavesdrop for the clich , the platitude, the borrowed and unquestioned idea with which the "right thinking" swaddle their minds. After his death his little treasury of absurdities, of half-truths and social lies, was published as a Dictionnaire des id es re ues. Because its devastating humor and irony are often dependent on the phrasing in vernacular French, the Dictionnairewas long considered untranslatable...

Lessons on how to mock against your own opinions ...

Published by Thriftbooks.com User , 15 years ago
"Darwin? Descending from the monkey." You can find many laconical statements like this in the 950 entries of the "Dictionary of Accepted Ideas (commonplaces)". The "Dictionaire de Idées Reçues" has been published as an appendix of Flaubert's final novel "Bouvard et Pécuchet", 1881, one year after the death of Gustave Flaubert (1821-1880). To the same (Darwinism-) topic the ironical German author Georg Christoph Lichtenberg (1742-1799) noticed: "After the human being comes the monkey (in the system of zoology) - after a broad ravine. But if one should want to organize the animals with regards not on their intellect's but on their bliss and cosiness -- then some people would reach a position under the miller donkeys and hounds." Lichtenberg's sentences needed more words than Flaubert's. Lichtenberg wrote a little bit didactically and cordially: "The health prefers to see the body dancing more than writing". Flaubert noticed with sarkasm on dancing: "One does not dance today any more; one marches, winds himself etc. " To the topic "NOVEL" Flaubert made the comment: "Novels ruin the masses. However there are novels for example which are written with the top of a scalpel: Madam Bovary." Here Flaubert becomes trivial, his point of view becomes dull, because he tries to support his own major work. - Ambrose Bierce (1842-1914) wrote in his comparable "Devil's Dictionary", 1906: "The former art of the novel is everywhere dead already -- unless in Russia where this art is still new. Peace to his ashes -- it still sells well." Flaubert's (1821-1880) sarcasm in this respect occupies between Lichtenberg (1742-1799) and Bierce (1842-1914) a kind of middle consciousness. This dictionary makes a parody on the tone of some pompous omniscience other works of his time. Flaubert probably died of syphilis which he had contracted at his Orient journeys. His satirical statement (with a hidden sort of double irony - back-fighting against the author): "Syphilis? Everyone is more or less affected by..." -- not a quite correct medicine sociologically definition - but one with a high self comfort effect, straightly consoling. Flaubert makes his jokes on the usual medical dictionaries - and on the fear to die. Flaubert liked to mock against himself permanently: "ARTISTS. All charlatans. Boast of their disinterestedness (old-fashioned). Express astonishment that they dress like everybody else (old-fashioned). They earn insane amounts, but fritter it all away. Often asked to dine out. A woman artist cannot be anything but a whore." If you read Flaubert quietly and stopping sometimes to think it over, you have the chance to learn how to make relative your own opinions...

Amusing to consider how many took it seriously

Published by Thriftbooks.com User , 20 years ago
Like any master of parody, Flaubert doesn't go completely overboard with this satire of the "...For Dummies" books of his day. If we know a bit about Flaubert, we know that his "definitions" in the book are tongue in cheek, but it's actually possible that a member of the French upper middle class in Flaubert's time would have picked this up and thought it a good handy reference book. Priceless, just priceless.This is great humor, and the accepted ideas it mocks are actually remarkably similar to the accepted ideas of our own time. Flaubert has a way of stating these "facts" that holds them up to the light of his brilliant ridicule. Because a dictionary can contain pretty much anything, Flaubert uses this as a platform to discuss views on art, politics, philosophy, food, animals, and just about everything else. Don't expect, however, to read this and just take its opposite in order to understand Flaubert's mind -- sometimes there is double irony here, and the author is himself ambivalent about the proper "definitions" of the words he lists.Overall, this is a genuinely funny read, and a useful insight into the petty bourgeois society (similar to our own) Flaubert loved to mock.

The Ideas that Ferment in the Brains of the Brainless

Published by Thriftbooks.com User , 21 years ago
"ARTISTS. All charlatans. Boast of their disinterestedness (old-fashioned). Express astonishment that they dress like everybody else (old-fashioned). They earn insane amounts, but fritter it all away. Often asked to dine out. A woman artist cannot be anything but a whore."Flaubert's satirical reference work, the Dictionnaire des Idées Reçues, reveals in a marvellously condensed form the writer's attitude toward the French bourgeois society in which he was brought up. It is a sort of guidebook to19th-century crassness, triteness, pomposity, and irrationalism decked out to look like reason. Clearly Flaubert regarded his own social class with a mixture of detestation, boredom, and intense fascination. He found both comic and tragic possibilities in this cultural stratum, which he mined relentlessly for the realistic details of his novels Madame Bovary, L'éducation sentimentale, and Bouvard et Pécuchet. In the early 1850s (while at work on Madame Bovary) Flaubert referred in several letters to his "sottisier," a compendium of trite opinions, of the ideas that "ferment in the brains of the brainless." Flaubert never published his dictionary, although in a letter to his mistress, Louise Colet, he hinted that he intended to do so eventually. Topical dictionaries and digests of knowledge were popular in France, especially among the upwardly mobile, who may have fancied that posession of snippets of miscellaneous information conferred a patina of erudition, and made one's dinner-party conversation more sparkling. Flaubert must have enjoyed parodying the entire concept of the "authoritative" reference work; his private compendium was arranged in alphabetical order, with ludicrous cross-references, secondary definitions (which generally contradict the first one), and a tone of pompous omniscience. The Dictionary's stock of platitudes served Flaubert as a sourcebook for the opinions of many characters in the novels Madame Bovary, L'éducation sentimentale, and Bouvard et Pécuchet. This work, as well as being enjoyable and witty reading for its own sake, is an indispensable artist's eye view of mid-nineteenth century bourgeois mores, and also provides some insight into the paradox the author struggled with in his novels: how to create pure art out of pure vulgarity.
Copyright © 2020 Thriftbooks.com Terms of Use | Privacy Policy | Do Not Sell My Personal Information | Accessibility Statement
ThriftBooks® and the ThriftBooks® logo are registered trademarks of Thrift Books Global, LLC