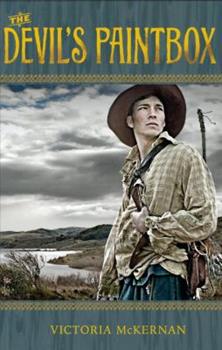 When almost-16-year-old Aiden Lynch and his little sister, Maddy, first meet trailrider Jefferson J. Jackson, they're eating clay and hunting grasshoppers on the remains of their family's drought-ravaged Kansas farm. In short, the two orphans are starving to death, so when this man Jackson offers an escape--a 2000-mile journey across the roughest country in the world--Aiden knows it's their only choice. They say there are a hundred ways to die on...

Published by Thriftbooks.com User , 12 years ago
While some of the content is for a little older audience (which I edited for my 7 year old), I read this book to my 7 year old for our evening read. He was absolutely enthalled, as was I. We cried and laughed together. We wondered how much more hardship this young person could endure. We talked about the treatment of the indiginous people. We tracked the travel on the Oregon Trail on his big wall map. We discussed the Civil War. This book offered so much that at the end my 7 year old declared it to be one of the best books ever (and it is competing with the Lightning Thief series) and that he would like to read it again when he gets older. That I think is the best review any book can get.

Published by Thriftbooks.com User , 12 years ago
I picked The Devil's Paintbox up to read on the bus and ended up sneaking off at lunch time to read it. The grasshopper part of the story is attention getting. So many of us will never experience that type of hunger but the idea of catching them in a lace tablecloth somehow made it something that you could relate to. And then later, when he talks about barely being able to restrain himself from catching grasshoppers even though he had plenty of food - well, that echos the feelings of my grandparents who went through the Great Depression. I very much liked the addition of the Carlos character. His trials in the war, without being a soldier, ring true as does his battle with laudanum. Carlos, Maddy and Joby were all great characters. I don't know as though I really enjoyed the book as enjoy just seems like the wrong word. I would however highly recommend it to others as a gripping snapshot of a boy's journey into manhood right after the Civil War.

Gripping Story Coming of Age on the Oregon Trail

Published by Thriftbooks.com User , 13 years ago
McKernan has written a gripping tale of a heroic young boy's coming of age in the nineteenth-century pioneering Pacific Northwest. Lone survivors on their Kansas farm and desperate for an escape from certain death from malnutrition, Aidan and his sister, Maddy, join a wagon train westward bound on the Oregon Trail. McKernan's depiction of life on the Trail, the complexities and rewards of relationships between Native Americans and pioneers, and the struggles of all to survive harsh environments, rampant diseases, and bone-breaking work, is deftly told and engaging. This book is a page-turner for young adults, adventurers, and history buffs alike.

A realistic, gritty portrayal of young pioneers on a difficult journey

Published by Thriftbooks.com User , 13 years ago
Fifteen-year-old Aiden Lynch and his 13-year-old sister, Maddy, are down at the creek, looking for mud to eat. If Aiden can find a grasshopper for dinner, they will consider it a feast. The only relief from their dirt and insect diet is the "corn jelly meat" they make from their meager stores of cornmeal, but now they each have only a bite left. Aiden reflects, wistfully, that it takes longer to starve to death than he would have expected. The two are all alone in their family's house on the burned out, barren Kansas prairie since the last of their family died. The neighbors have packed up and moved on, they have no relatives, and the town that once was four miles away has been deserted. Aiden doesn't know what to do. He's not old enough to join the army; besides, he can't leave Maddy all on her own. Suddenly, Aiden spots a grasshopper. He prepares to catch it when a voice startles him: "Damn, boy. What the hell are you doing?" The man is Jefferson J. Jackson. He's looking for men to work in the lumber camps in Seattle, Washington, traveling there with his wagon train via the Oregon Trail. Despite Aiden's initial suspicion of Jackson's intentions, chatty Maddy invites him into their home. Jackson is a gruff, hard man, but he has a gentle heart. When he hears of the Lynches' situation, he allows Aiden to persuade him to take the siblings along to Seattle, although he warns them of the hardships they're sure to encounter along the 2,000-mile walk ahead of them. When they reach Seattle, Aiden will work in the lumber camps in order to pay Jackson $200 --- the price of traveling with Jackson's wagon train. When they arrive at the wagon train camp, a party is in full swing. There's plenty of food; the sight of actual jam and butter move Maddy to tears. Although they try to hold back, they feast until they're sick. They also meet some of their fellow travelers: the beautiful French wife of the preacher, a snobby girl in a lovely dress, a horrendous bully and the rather mysterious doctor named Carlos Javier Perez. In one week of traveling, gregarious Maddy knows all about everyone on the wagon train. The only exception is Carlos, who keeps to himself except for his brain-injured companion, Joby. Maddy notices that Carlos frequently drinks from a small brown bottle and is intrigued when Joby mentions that Carlos fills the bottle from a "jug of poison." Soon, though, she is put in a situation where she learns a bit more about Carlos and his secrets. Simultaneously, she has decided she wants to be a doctor when she grows up. But their long and difficult journey has barely begun. THE DEVIL'S PAINTBOX is a realistic, gritty portrayal of young pioneers on a difficult journey. It puts faces, personalities and feelings to the settlers we read about in history books, drawing them into real life. Aiden and Maddy are both sympathetic characters who readers will care about, and the plot is fascinating and well-paced. This is an excellent read and very highly re

Published by Thriftbooks.com User , 13 years ago
The Devil's Paintbox is a handsomely made novel with the power of a John Ford western and the same deep insight into young people and adventure I find in Philip Pullman's His Dark Materials trilogy. That this is a novel ostensibly written for young people shouldn't deter adults. Like Pullman's work, this is simply fine literature. Ideally, I think, it should be read with a smart pre-teen or an adolescent. I picked it up because I'm familiar with McKernan's "adult" work, but I'll be sending a copy to my nephew and stocking a copy away for when my own child is old enough to read it. The Devil's Paintbox won't please parents who want sugar coated stories for their children -- this is a realistic portrayal of the old West, of disease, of fear, and of courage. It's written with humor and lyrical attention to detail on every page. ("Down in the valleys, they lived in shadows with no horizons, the sun only dappled light through the trees.") It's not a difficult book, but a challenging one -- the best kind. I imagine young readers will remember into adulthood, as I still remember the Narnia and the Tolkien books and novels like A Separate Peace.
Trustpilot
Copyright © 2022 Thriftbooks.com Terms of Use | Privacy Policy | Do Not Sell My Personal Information | Accessibility Statement
ThriftBooks® and the ThriftBooks® logo are registered trademarks of Thrift Books Global, LLC