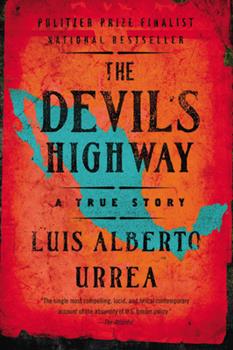 The Devil's Highway: A True Story

A widely-praised piece of investigative reporting examining the journey of 26 men who in May 2001 attempted to cross the Mexican border into the desert of Southern Arizona through the region known as the Devil's Highway. So harsh and desolate that even the Border Patrol is afraid to travel through it, the Highway has claimed the lives of countless men and women - in May 2001 it claimed 14 more. History of high acclaim from the author of The Hummingbird's...

Published by Thriftbooks.com User , 16 years ago
Luis Alberto Urrea's read is riveting - and a superb blend of research, fact and "in the moment narrative" as you live the story of these border crossers' lives, dreams and disasters. You'll learn more about the real issues facing peoples' lives and the complicated costs, politics, heartaches and realities of the US border and its management - and its implications for immigrants - illegal, legal or otherwise. Written in short segments and so well put together - Urrea's book is simply terrific. I'd also recommend Tommy Lee Jones' recent movie - The Three Burials..." on the same topic - slightly different plot but similarly engaging in its content and depth.

Published by Thriftbooks.com User , 18 years ago
Urrea delivers a moving novel based on the true story of the Yuma 14, fourteen Mexicans (from a group of 26) that tried to cross the border and enter the US illegally through the Arizona desert and succumbed in the attempt. The author presents the facts efficiently and his conclusion follows: Mexicans trying to cross the border are human beings like everyone else that had the bad fortune of facing tough economic condition; they should be respected. The author describes the conditions and historic events that lead to the beginning of the illegal immigration into the US and draws a clear parallelism with our times, when there are several tasks in the US that Americans are reluctant to do, thus illegal immigrants are needed for this. When price changes in international markets adversely affected the Mexican economy and overpopulation became a problem, some Mexicans decided to come to the US. They ended up with a comfortable life, so when others found out, a growing interest in crossing the border developed.Organizations of coyotes were formed to provide supply for the growing demand, and the poor people seeking a better future became just a means to an end. These individuals in their attempts have to fight against the heat of the desert, thirst, exhaustion, "la migra" (Border Patrol) and the coyotes themselves. On top of this, the control at the border has intensified throughout the last years, so the groups seeking a new future have to go through more dangerous paths each time. In the case of the twenty-six Mexicans that are the center of this story, the point of entry was the Devil's Highway, a deadly desert in Arizona that has claimed numerous victims through the years. Urrea shows his outstanding knowledge of the topic in question and uses this in his descriptions with no holes barred. One of the most shocking passages of the book was the explanation of the different stages of death by heat, which go from Heat Stress to Heat Stroke. The realism and brutality of this account left me absolutely breathless. Overall, the quality of the novel is outstanding and even though it is a tough read at some points, in the end it is extremely satisfying and enlightening.

Published by Thriftbooks.com User , 18 years ago
Amazing book! I couldn't put it down and read it from cover to cover in one day. Urrea has a gift for language and he applies it here. This is the story of 26 men from Veracruz. Urrea could have recounted the story of how 14 of them died in the desert and left it at that. This would still be a book worth reading... but he went way beyond those confines. He took the story of those 26 men from Veracruz and put it in historical, cultural and geographical context. He opened a window onto other worlds and onto our own. He portrays the immigrants, the border patrol and even the coyote, without judgment. He allows the reader to come to her/his own conclusion. Powerful, poetic and unforgettable. I finished it and got back on line to order everything else he has published.

Published by Thriftbooks.com User , 18 years ago
Luis Urrea only writes classics.As another writer who writes about the borderlands,I assure you ,he is the best purveyor of the human condition on the planet.You cannot read this,or any of his books, without changing your view of the world;changing your view of "right" and "wrong" and without changing the contents of your own heart.In Luis Urrea's world there are few villains,few stereotypes and few "blame-games".But there is a mountain of reality that every person in North America needs to consider----what worlds,political and economic, have we created that push humans into impossible journeys,folly,even death,just to earn enough to eat and send their kids to school? What borders have we imposed--both geopolitical and cultural, that separate human beings so completely as to compell the events of this book?And,for God's sake, what does any of us gain from it? The Devil's highway is about the desperate saga of a group of poor Mexican immigrants....and it is about all the rest of us who perceive ourselves as "not part of the problem". The US/Mexico border has become a stake through the heart of humanity.No one intended it that way,but it pierces the hearts of millions just the same.This is a book that every high school and college kid in America should be assigned.Period.

Death on one of the world's deadliest borders

Published by Thriftbooks.com User , 18 years ago
"Mr. President, tear down this wall." Some day, perhaps, an American president will have the courage -- or a Mexican president will have the honesty -- to go to the wall between Mexico and United States and demand its removal in the name of freedom. Until then, the Sonoran Desert will continue to be the site for hundreds of unbelievably agonizing deaths every year. Within the last 10 years, more people have died here than those who tried to cross the Berlin Wall. Until then, as Urrea makes abundantly clear, Mexicans will continue to create networks that in a few years will be the great criminal syndicates of the United States and Mexico. It's happened before. Prohibition was a great "holier than thou" movement, and it generated many vicious criminals. It took the courage of President Franklin Roosevelt to end its rampant hypocrisy. Some day, if Americans ever elect another president with the courage of Roosevelt, a border solution will be found. It's agonizing to be slowly baked to death in the sun. Thousands of desperate people risk it every year; this book tell of 14 who didn't make it in May 2001. The reporting is excellent, the writing is superb. Don't read it unless you have a strong stomach; the deaths of "Los illegales" and the pure greed of Mexicans who recruit and deliver then to the US is a gruesome story. (Keep in mind, this is also a major route for deadly drugs.) It took a man from Chicago to write this book. Few in Arizona, where people hire illegals with the casual unconcern of buying a drive-through taco, care about the human cost. Arizona cities actually run drive-by labour centers to facilitate the hiring of illegals by homeowners and business people. The media generally ignores desert deaths unless it is groups of a dozen or more; "big" news in Arizona is the opening of a new shopping center or the latest exploits of a Britney Spears. But then, who ever wrote a book exposing rum runners? John Steinbeck immortalized Okies in 'The Grapes of Wrath," but they had a cakewalk compared to what Mexicans now risk to get low wage US jobs. Urrea has done a superb job citing facts about one of the world's deadliest border crossings; read this book, and you'll cry in sorrow and rage at what people endure to reach the US. I've hiked the area where these men died; three hours without water, even in the cool (only 85 degrees F) winter, is enough to produce the first signs of dehydration. It's a tough, unforgiving, brutal land. Mistakes are seldom forgiven. Few, if any, Arizona writers know the desert well enough to describe it as accurately as Urrea. For most Arizonans, illegal aliens -- like federal spending -- makes their state cheap, easy and lazy. It took a man from "the city of big shoulders" to write this book. As you read it, keep in mind that a child or grandchild of any one of these migrants could well become another Urrea (provided they get out of Arizona). It's what America is all about, and it is why
Trustpilot
Copyright © 2022 Thriftbooks.com Terms of Use | Privacy Policy | Do Not Sell or Share My Personal Information | Accessibility Statement
ThriftBooks® and the ThriftBooks® logo are registered trademarks of Thrift Books Global, LLC