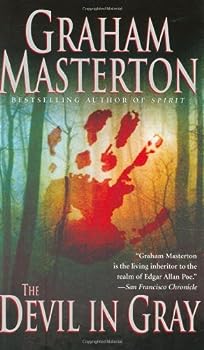 The Devil in Gray

This description may be from another edition of this product. The ghost of a Confederate soldier returns from the grave, determined to slaughter his enemies.

Juicy dark tale, I dare ya to read it!

Published by Thriftbooks.com User , 15 years ago
Graham Masterton has been my favorite horror writer since I was a teen and every time I read his work it reminds me why that is so. His true gift as a writer is in the creative research he does for each one of his novels for his bad guys and foes are always different and have different cultural history and fairy tales woven for them. Whether it's Japanese demon's, Mayan pyramids and their watchers, huge rats, Sphinx like evil women, dark angels, djiins or Santeria magicians such as in this book, his writing is so realistic and terrifying that I start to believe half of it as true when I get sucked into one of his books. Graham doesn't shy to open a book with a violent crime in its process and this one is no exception. He makes it perfectly clear that the person you read about in the beginning will die and it gave me Goosebumps finding out how it happened. Our main character in this story is detective Martin Decker whom we are introduced to while he's in the middle of having an affair with his Captain's wife. He seems like a nice guy but he surely gets around and runs over lots of female hearts before we find out what broke his own heart in the first place. As the story progresses however, Martin doesn't cease to impress and befriend the reader with his brave quest battling the Devil in Gray. This book deals with African magical religion known as Santeria. Martin's nemesis is the Devil in Gray; an invisible foe who seems to murder random people in the most gruesome and bizarre ways. As martin follows the investigation he finds out more than he bargained for and his own life is turned upside down. Somehow we find out that he directed the Devil's anger on his own life and he needs to go and get allies to help him. The only problem is that the only person who can help hip is a very evil woman, but she is connected to his heart that I mentioned was hurt in the past. Decker is forced to believe that his nightmares are real and they are coming after him and he is not safe in his home, his job and not even his own dreams as the invisible enemy charges closer and closer. I loved reading the suspenseful struggle and detective work that Martin had to go through in order to decipher the stranger murders before the list stopped at his own name. The ending of this book was superb, the typical golden trophy of any Masterton book as he is the master of great endings. This will fill you up and leave you satisfied. Even though this book deals with African magic and the Civil War, two odd topics that somehow do come together I had a blast reading it.

Chilling, spell-binding, and uniquely horrific...that's Graham Masterton for you!

Published by Thriftbooks.com User , 15 years ago
Decker Martin is a Richmond, VA detective who is slowly reaching the end of his rope. Carrying on affairs with various women (including his captain's wife), routinely looking for a new girlfriend, Martin is trying to forget the death of his beloved girlfriend, Cathy. That's not so easy as of late, especially because he's been having dreams about Cathy...and seeing her apparition in his apartment... Cathy is warning Decker. The detective has just taken a unique and disturbing case--a killer who appears out of nowhere, brutally muders without being seen, and vanishes just as suddenly. The only eyewitness is a Down's Syndrome girl with a unique psychic gift. But as Decker pursues his invisible killer, he slowly descends into the Richmond subculture, into a fascinating and terrifying religion, and comes to realize that he may be on the killer's hit-list... For decades, Graham Masterton has been crafting some truly unique horror novels. "The Devil in Gray" is no exception. It is gritty, it is witty, it is terrifying. Decker Martin is definitely an anti-hero prototype...occasionally hilarious, occasaionally unlikeable. The killer--and the deaths--are definitely spine-tingling, and then there is the mystique of the religious subculture you find yourself emersed in. "The Devil In Gray" is one to read late at night, with the lights on. And for you Civil War buffs out there...prepare to have your socks frightened off! The same goes for the rest of you.

Published by Thriftbooks.com User , 16 years ago
In the last ten years, Masterton's horror work has benefitted from his historical romance fiction.This book is not one for "Civil War Buffs" but is a book for people who like Supernatural Horror with a very detailed historical background. Masterton's craft at this style of popular fiction is getting better and better. His research skills are as excellent as ever, but it is his presentation of the material that gets better and better. Masterton's real key is the story weave. He shows fairly extreme ultra-violence, and gradually draws together the threads of occult themes in various forms, and in his usually tantalizing manner, creates a very intriguing tapestry of superb horror, scarey supernatural elements, increasingly witty comments, and historically hysterical moments that always leaves the Masterton fans ( and non fans ) wanting more. ENJOY

Wow, what a different, awesome book.

Published by Thriftbooks.com User , 16 years ago
For Civil War history buff's that love horror and some humor, try this book out. It has to do with black magic from Africa that is release into today's world. While I had issues with Decker and how he treats people, I think towards the end he more than made up for his laziness and his respect for other people. The excitement starts from the beginning and does not end there. This is a must have for any true horror fan as Graham Masterton is the MASTER of horror. Try his other books....Picture of Evil, Walkers, the Manitou, Revenge of the Manitou and so on.

Published by Thriftbooks.com User , 17 years ago
The Devil in Gray is a nice change from novels I've been mucking through recently. Concentrating on the old religion, Santeria, and adding some modern day twists, it works on multiple levels. One thing that really worked for the novel was the characterization; lead detective Decker had me laughing aloud more than once. The gore and violence were not censored in the least; I cringed in more than one scene as a victim was offed in horrendous fashions. Masterton's writing style is exceptional, the pace begins with violence and ends with it, and there's a mystery in there to boot - one not easy to figure out. Give this one a try; I was glad I did.
Copyright © 2020 Thriftbooks.com Terms of Use | Privacy Policy | Do Not Sell My Personal Information | Accessibility Statement
ThriftBooks® and the ThriftBooks® logo are registered trademarks of Thrift Books Global, LLC