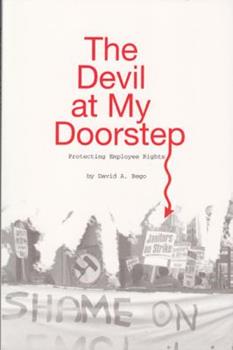 The Devil at My Doorstep: Protecting Employee Rights

Published by Thriftbooks.com User , 12 years ago
Obamanutz: A Cult Leader Takes the White House It was a nasty, ugly, three-year, million-dollar war I did not ask for, but had to win. Otherwise, the business I loved would be infiltrated by a scheming labor union determined to undermine employee privacy rights and destroy my version of the American Dream. -David Bego In The Devil at My Doorstep, David Bego chronicles his long and fierce battle with Obama accomplice, Andy Stern, and the SEIU thugocracy. Bego is the archetype of the American Entrepreneur, which makes him an Enemy of the State far more menacing than a nuclear Iran. Bego's company, Executive Management Services (EMS) grew from nothing to 5000 employees in thirty-three states as a result of hard work and a dedication to quality service that is in the molecular structure of Americans like Bego. EMS provides commercial cleaning services, facility maintenance and security. Thus, EMS employs janitorial workers, making Bego an irresistible target for Stern and SEIU. One theme emerges from Bego's story that dominates the narrative: his genuine love for his employees and his company. Even those workers who succumb to the siren song of phony promises from SEIU get Bego's compassion as he watches those same workers tossed aside when they are no longer useful to union thugs. EMS, prior to the assault by SEIU, ran efficiently and productively. Employees were paid higher than industry average and were offered excellent benefits. It's part the nature of Bego himself as well as his business acumen. Winning the confidence of Fortune 500 companies requires above average workers and above average performance. The EMS motto is: "We don't just clean, we manage." EMS clients properly expected the workers to be well trained and conscientiously screened. To round out the picture, EMS ultimately became a true family business with the hiring of Bego's wife, daughter, son, son in law and even Bego's own father. In other words, EMS is precisely the kind of entrepreneurial success story that could only happen in America. So true to the American Dream is EMS that it almost sounds like a cliché. Yet, we should all take comfort that Bego proves the Dream can still be realized. Assuming, however, your business can withstand a full scale jihad launched by White House-friendly union bosses. "If you can imagine this scenario, then try to imagine what it was like when one day this peaceful world was interrupted by the knowledge that EMS was about to be invaded by an outside adversary threatening to turn this world of ours upside down. One minute, we were enjoying the fruits of our labors minding our own business, and the next attacks begin lambasting the company as a `rat contractor' that cleaned buildings dubbed `Houses of Horror' for janitors who were exploited, intimidated, threatened, and abused all in the name of corporate greed. For the first time in our history, multiple National Labor Relations Board filings, frivolous charges with que

Published by Thriftbooks.com User , 12 years ago
This is an insightful book about a man of strong convictions and his desire to see what is right prevail. A well written documentary on his quest to stop unfair labor union practices. This is a must read for those who work in an environment where unions are already operating or are trying to set up shop. I highly recommend reading this book and then sharing it with friends, family and coworkers.

The Persuasion of Power

Published by Thriftbooks.com User , 12 years ago
It is a fascinating, inside read, about the ruthless determination by SEIU organizers to force a company to give up its right to a union election. And, make no mistake about the ruthlessness. The SEIU is an activist organization and the rules, as such, don't apply to them. For them, the End counts. Therefore, any Means can be used. The author recounts numerous charges, all finally submitted to the NLRB as unfair organizational efforts and the NLRB found in the company's favor. It is a story stretching over three years of nearly constant warfare including using children at Halloween in the owners neighborhood to hand out flyers condemning him and his company personally. The author/owner repeatedly asked for an election by secret ballot and was never given that opportunity. They paid well above average wages and benefits...but SEIU said an election would take too long...so the battle stretched out for 3 years. SEIU counts among its past employees one Barack Obama. And the NLRB now has a previous SEIU VP as its chief administrator. Read this book and get up to speed on the threat of SEIU, Stern and the wrongly named Employee Free Choice Act (EFCA). How could it be free if no one is given a chance to vote, in secret, as is now the law? This act, strongly backed by the Democratic Party legislators, would do away with the hard won right...and enrich beyond imagination the coffers of the SEIU and other unions. (Exp. Author's company had 5,000 employees. If unionized without a vote, they would pay SEIU $2,400,000 in annual dues!)
Trustpilot
Copyright © 2022 Thriftbooks.com Terms of Use | Privacy Policy | Do Not Sell My Personal Information | Accessibility Statement
ThriftBooks® and the ThriftBooks® logo are registered trademarks of Thrift Books Global, LLC