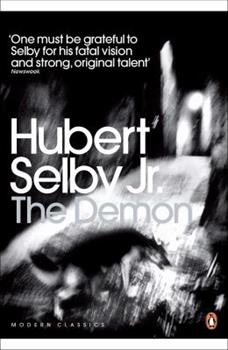 A major American author of a stature with William Burroughs and Joseph Heller.' Los Angeles Times Harry White is a man haunted by a satyr's lust and an obsessive need for sin and retribution. The more... This description may be from another edition of this product.

Published by Baby duck , 2 years ago
It's a rare enough thing, my taking time to post a review. This book however is going straight to donations box

Published by Thriftbooks.com User , 19 years ago
Every book that I have read written by Selby, has affected me in too many ways to mention. Those people who have read The Demon, and any other books by this man know, that he tells it like it is. Anyone who cannot handle his writing, or thinks that it is too "disturbing" is turning their head from reality. His fictional characters and scenarios may be coming from his head, but they are completely real, and are totally part of our society. His subjects are things that everyday people do not see; what society deems as "deviant"; and what parents tell their children to avoid. To ignore these things is to be ignorant and naive, and to pass them of as a fallacy, is to live a life of fantasy; in a world of peace, love, and perfection. But that is not how the world is outside of the comfort zone of suburban America. Some can relate to Selby and his characters; Being a victim of anxiety and depression, having that feeling of something churning and knotting up inside of you. Read these books to understand, not to entertain and critique. There is a bitter and ugly underworld developing under our noses, and we must understand it to ever begin to accept it.

Published by Thriftbooks.com User , 19 years ago
I read this book and handed it over to my wife as soon as I was done. We both agreed on two points. One, it is the best written novel we have ever read, two, it would be a long time until we read it again. The best written novel? Well, the way Selby jr wrote the caracter Harry, you actually feel the way he is feeling in the book, long after you put the book down. If Harry was having a bad day, and I put the book down to go to work after a chapter, I was having a bad day. Selby jr writes so well, you feel the pain and desperation of Harry. I gave the book to my Father-in-Law, who devoures books two a day. He gave me the book back saying he couldnt finish it. It was too disturbing for him. You be the judge, highly recomended.

Published by Thriftbooks.com User , 20 years ago
Selby is just about the best author I have ever read. His books speak to me and make me believe what each page says more than any other author. There is a fundamental, and somewhat un-nerving, realism to his books that makes them highly uncomfortable reading, but it is this discomfort which makes me come back to his books again and again. Last Exit To Brooklyn blew me away, with it's picture perfect description of desperate, (an perhaps a little extreme) cases of inner-city slum-type living, and the psychological effects it can have upon it's street dwellers. Requiem For A Dream carried on a nasty, horrid-tasting tale of drug-related woe that Trainspotting could only begin to thinly paint. And now I've read The Demon, and this is another gut-wrencher, ready to pull you under life and show you how it REALLY works.The Demon focuses on Harry White, a young, high-flying office worker in a successful Manhattan firm, who basically spends his days working hard, travelling hard (he has to journey from his parents' place out of town to work and back every single day), and seducing hard, because Harry's favourite hobby is to pick up strange women (especially if they're married - it adds to the excitement), and then basically dump them right after he's had his fun. The book goes on to show how Harry derives an almost narcotic-like craving for women, and begins to pick up just about anyone on his lunch hour, take them to a motel, and then try to get back to work on time. The futility of his carnal desperation soon takes it's toll on his work-load, and he finds himself getting torn between 'Broads' and potential promotion.As time goes by, it seems that Harry grows up somewhat. He gets married to a lovely girl he knows called Linda, who mentally captured him by not sleeping with him 'til they were married, thus becoming a sort-of 'chase' for Harry to find irresistable. But even through the wonders and beauty of this marriage, Harry finds himself uneasy at work, on his lunch break, and even at home. So, he wanders the streets of New York and the deep, dark depths of his psychological make-up to find new and exciting ways to fulfill his constant craving for elation, excitement, adrenaline and even terror.The way in which the story is paced, and the way that Selby has set the story out so that it can swing from one scene of absolute horror to a beautifl, emotional journey is immense. The writing is so bafflingly simple that this, itself, provides the most starkly human quality of all. There is no complex meaning to the way Harry feels, and even if there is, trying to figure it out is futile. The mind of the character is set. No pacing, no adjustment brought on by psychological help. He is what he is, and this will shock you for being to frank. It's like looking through someone's eyes, and that's why it's so good.I highly recommend this book. No, I dare you to read this book. How does that sound?

Published by Thriftbooks.com User , 20 years ago
I am a huge fan of Selby and of all of his books, this one has to be my personal fav. Some will not like it for it is too dark, too personal, too true. If you are like me, and you look at a person as shallow in most cases, your mind goes off into deeper things, you are always tormented morally for some reason, the demon will rock your soul. As I was finishing the last few pages I looked down at my chest...it was going up and down as if I was gasping for air. The end is that intense. I have never had such a reaction from a film as I did from this book.I also felt like throwing up that night after finishing it. Not because it was gross, but because I was feeling that sickness that the main character was feeling. It was as Selby told my gut how to feel, and it felt.This is my fav book of all time, and if you see things differently than others, or you think you do, read this, it will change you.

A great book about the twisted roots of human sin

Published by Thriftbooks.com User , 24 years ago
Usually when fiction writers tackle the subject of men driven by the compulsion to kill, they drag out the same worn Freudian cliches; typically, in showing what made a character turn into a serial killer, an author will treat the reader to scenes from the character's childhood in which they were anally raped by their grandmother or some such nonsense, and this is assumed to be reason enough for the character to become a killer. This is utter bull, and Selby's neatly sidesteps silly psychological explanations to demonstrate more realistic motives behind compulsive, motiveless slaughter. If you study the lives of many serial killers, you'll find that they began killing after having committed less serious offenses. At first, they may be inclined to simply peep in windows or steal. Soon the excitement of these acts diminish with repetition, and more extreme activities must be engaged in to cause excitement, such as rape. And if that ceases to satisfy their jaded sensibilities, they will then engage in murder. Selby illustrates this progression through the character of Harry White, an outwardly successful businessman driven by the compulsion to screw just about any presentable woman who crosses his path. Sounds like most men, but unlike most men Harry begins to find sex too easy, and not exciting enough. To fill this void within himself, he takes up petty theft. And from then on, his crimes become darker, and his soul more tainted with sin. However, Harry is trapped by his own need for excitement, and because of this he is the perfect illustration of the mindset of a serial murderer; the man who kills to fill the hollowness deep within, and who with each crime finds the hole growing bigger, yawning to be filled with more and more blood and gore after each crime. The best book you'll ever read on the subject of compulsive murder.
Trustpilot
Copyright © 2022 Thriftbooks.com Terms of Use | Privacy Policy | Do Not Sell My Personal Information | Accessibility Statement
ThriftBooks® and the ThriftBooks® logo are registered trademarks of Thrift Books Global, LLC