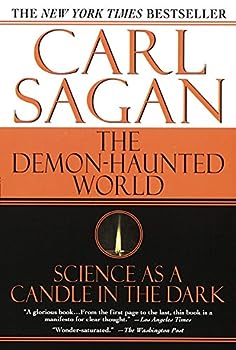 The Demon-Haunted World: Science as a Candle in the Dark

This description may be from another edition of this product. A prescient warning of a future we now inhabit, where fake news stories and Internet conspiracy theories play to a disaffected American populace " A glorious book . . . A spirited defense of science ....

Published by MichelleG , 25 days ago
I haven't read the books yet 'cuz I just got it, but I trust it will be excellent. Been a Carl Sagan fan since the mid '70s. Sad to say the book is not even close good condition, it's barely acceptable. I expected a smell because old books smell, but the plastic coating is beginning to peel off, the front cover is very curled and the pages are very yellowed making it hard to read. To make matters worse, they left a price tag in it that say $2. I paid almost $14. I sure hope I have better luck with the 4 books (some used) that I ordered today before getting this book.

Published by Donna , 28 days ago
I ordered this book in Like New condition...for a dollar more I could have ordered it New...it arrived in a condition somewhere between good & acceptable. DISAPPOINTED!!!

Published by Angela , 8 months ago
Excellent book written beautifully. Best book I’ve read and super relevant to this day. Super insightful and definitely worth reading at least once, even twice.

Published by Kelly Pedigo , 11 months ago
This book was covered in mold stains and had a dead bug in it and I bought it in "very good" condition...

This book is an eye opener

Published by Gabriel L Delatorre , 2 years ago
Carl Sagan is a gift to this world. He opens your eyes to many things ranging from pseudoscience to myths to aliens to faith.. if i had to to recommend a book that every person should read at least once, this would be the book.

This book changed my life.

Published by Thriftbooks.com User , 14 years ago
The Demon-Haunted World, by the late Carl Sagan, is one of the most important books ever written. Sagan wrote it after his doctor told him he would not live much longer. This book represents his final, no-holds-barred assault on nonsense, hokum, and humbug, ranging from UFOs to psychics to theism. Some people say that writing such a book is an exercise in futility, as those who read it and enjoy it will already agree with you. I, for one, know that this is not always the case. When I read Sagan's book I believed in psychics. I believed in haunted houses. I also believed that people were being abducted by aliens. This book changed all that. Not only did it change my beliefs, it also single-handedly influenced me to return to college. I started revamping my home library, selling books on the paranormal and purchasing books about logic, psychology, philosophy, and science. Some books do make a difference, and for me, this one made a huge difference. I was a college dropout working at a bookstore. I read Clarke's 3001, which in the appendix stated that The Demon-Haunted World should be required reading in every high school (I agree). I then read The Demon-Haunted World. The book made me want to be a scientist, I found it so exciting. I re-enrolled in college, and now, over a decade later, I teach both graduates and undergraduates and am about to obtain a PhD. I thank Sagan for the influence, and for his WONDERFUL book, which IS a candle in the dark.

A Candle in the Dark

Published by Thriftbooks.com User , 17 years ago
Demons, UFO's, the Loch Ness Monster, Big Foot, fairies and the like are all investigated in this incredible non-fiction book by the late Carl Sagan. Pseudoscience, and those who perpetuate it, find their place in today's society among those who want to believe in the impossible. In fact, Sagan too admits that he would love to find life on other planets, among other things (he was, after all, an advocate of SETI, the Search for Extraterrestrial Intelligence). However, science today has not been able to prove that such things exist. As the book states, "the siren song of unreason is not just a cultural wrong but a dangerous plunge into darkness that threatens our most basic freedoms." This book challenges the reader to critically scrutinize information professed by supposed experts, and be more of a skeptic. Sagan states early on in the book that "some 95 percent of Americans are scientifically illiterate." By using the scientific method combined with a little bit of logic and common sense, one should find that it is much more difficult to be mentally taken advantage of by pseudoscience "experts." Intelligent inquiry and analysis of information presented, and those presenting it, proves to be an invaluable tool.Nonetheless, stories regarding crop circles, area 51, and other such nonsense still abound. Sagan runs through various examples and places them under the hypothetical microscope. Once examined more closely, most of these theories and fallacious postulations crumble quite easily. What some people don't realize, and what Sagan points out, is that things just as mysterious and awe-inspiring can be found all around us, and they are indeed factual and are being investigated by those in science fields. We need not look elsewhere to find mysticism and intrigue. People are still trying to completely understand viruses and the molecular building blocks in gas in space, and if people were equally as drawn to understand real phenomena as they are fallacious theories, then more people would be working to unravel the true mysteries that are much more worthy of our efforts. I truly feel that this is a book everyone should read. Not only does Sagan do an excellent job of attempting to popularize science, but he also tries to teach people how to think for themselves rather than to be force-fed information from less-than-trustworthy sources. The demons in this demon haunted world are both those who perpetuate such celebrated fallacies, as well as those who believe them without question. Sagan attempts to teach, in this book, how to distinguish "real science from the cheap imitation." Indeed, he does just that.

Published by Thriftbooks.com User , 21 years ago
One word: OUTSTANDING.I read this book over two nights, couldn't put it down, and afterwards was eagerly searching for more of the same. Science at it's best-accurate, timely, well-argued, emotionally and mentally invigorating, spiritually uplifting; and filled with boundless enthusiasm and hope. Like the author, Carl Sagan himself. This book describes the 'scientific journey'. Alternately curious, cautious, inquiring, uplifting, compassionate, humane, warning, discovering and fulfilling. Topics include UFOs, alien abductions, witches, religion-both good and bad, Roswell, frauds, scientific genuises, skeptical thinking, wishful thinking, deceptive thinking, balanced thinking, belief, superstition, astrology, ESP, myth, and the like; and the role and place of science and scientific inquiry in all of this. For those who think science "destroys" spirituality-does not scientific inquiry with its' abundant curiosity and courageous endeavour accurately describe a spiritual journey to find the truth? Sagan contends, with great clarity and enthusiasm, that it assuredly does. It's just that this scientific journey is not an easy one, neither for the individual, nor humanity, by any means. But when has the attempt to find "truth" and "light" in this complex world of ours, ever been easy? Sagan argues that science and the scientific method is a noble and enlightening endeavour, an unquenchable candle, lit by the human yearning for truth, and able to steer humanity towards truth and goodwill in a world of mists, shadowy truths, and darkness. For those who wish to open their minds to science and what it has to say about much that goes in this beautiful, yet sometimes dark world of ours, this is the book for you. This great book (Sagan's last) is a fitting testament to a great man of science. Sagan, who passed away recently, was one of the great communicators of science, and this book is considered by many to be his best. Reading it was something I'll always cherish.

Published by Thriftbooks.com User , 21 years ago
Many are turned off by science since they find it to be cold, desenchanting or even a bit nihilistic. With a clever sense of humor and easy-to read writting style, Sagan proves that science can be an awe-inspiring spiritual experience, when we are confronted with the immense complexity of nature and our universe. He reminds us how to be a good skeptic: one who is open minded to new information, but will only believe after receiving proof. (Which consists of much more than anecdotal evidence )As Sagan states "I believe that the extraordinary should be pursued. But extraordinary claims require extraordinary evidence." He urges everyone to think skeptically and to express our opinions while being respectfull of others' beliefs. Unfortunately those who would benefit from more skepticism are the ones less likely to pick up this book. It takes courage to abandon the comforts of an "all-loving" ever present god, immortality, and belief in psychic powers in exchange for the truth. However, Sagan shows us how science has greatly improved the quality of life throughout history, and how the systematic search for truth can be more rewarding than blinded-faith. We should be open minded("Absence of evidence is not evidence of absence") without being gullible. And we must remember how "wishfull thinking" does not make something true.

The final statement of a great man

Published by Thriftbooks.com User , 21 years ago
In an age where we are surrounded by psychic hotlines and alien abduction stories, the vast majority of the population is consistently fooled into believing the most absurd of notions. As Sagan beautifully demonstrates, this is not because of our collective intelligence, but a part of human nature. _The Demon-Haunted World_ is easily one of the most important books of this century. High school students should read this book to graduate, at least a little exposure to sense will be advantageous to our growing society. Faces on Mars, aliens, faith healers, and various other practitioners of pseudoscience swirl around us in a pool of credulism and blind faith in the most absurd of Golden Calves. Sagan brings the razor of reason to the face of fallacy and superstition and cuts off delusion and myopic belief. There is perhaps no other person who could have exposed this seldom seen part of the human being. Carl Sagan, the man who loved science so much that he felt in his heart the desire to sing it to the rest of the world, deserves the highest recognition for his accomplishments. I can think of no better than to have _The Demon-Haunted World_ shown to the whole of the world.
Copyright © 2020 Thriftbooks.com Terms of Use | Privacy Policy | Do Not Sell My Personal Information | Accessibility Statement
ThriftBooks® and the ThriftBooks® logo are registered trademarks of Thrift Books Global, LLC