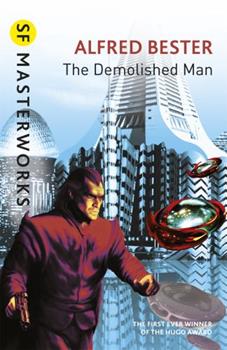 This description may be from another edition of this product. In the year 2301, the wealthiest man in the universe is determined to commit murder in a world in which telepaths are used to detect possible crimes before they can happen.

Published by Erich , 3 months ago
I love the crime noir feel of the book. It was laid out a little strangely at times. Even to the point of being a little bit hard to follow. But it really is a great story with a well thought out ending. The whole thing was a masterfully created piece of literature.

Bester At His Best

Published by Thriftbooks.com User , 16 years ago
This is a classic science fiction novel first published in 1952, which is a must read for anyone interested in the history of the genre. Age has been much kinder to this novel than to most from that era, and this still is a good read today. It is the winner of the first ever Hugo award in 1953, and was nominated for the International Fantasy Award in 1954. It was recognized by the fans when it was rated the 7th best science fiction book in the 1956 Astounding/Analog poll, and moved up to 5th on that poll in 1966. It has faired well on the Locus polls as well, being rated 14th for All Time Novel in 1975, tied for 18th for All Time SF Novel in 1987, and finally 22nd for SF Novel before 1990 in 1998. It is considered by some, to be the beginning of modern science fiction. It is the story of Ben Reich who is the extremely rich head of a large corporation, and his decision to kill a business rival with whom he has become obsessed. The biggest problem he has is the "Espers", telepaths who can read his plan from his mind, and stop him or easily have him convicted after the crime. This theme will sound familiar to fans of Philip K. Dick, but the two stories are quite different. There are many more events in this book which cause it to twist and turn, but it would be impossible to talk about them without spoiling the story. This is a great book, and well deserving of the awards and accolades it has received.

One of the science fiction greats

Published by Thriftbooks.com User , 17 years ago
(First, just to make something clear: this book has no connection to the Snipes/Stallone stinker movie _Demolition Man_.)Bester's first novel (after years of short stories, comics, and radio) also won the first Hugo Award, and deserved it. This is cyberpunk mayhem thirty years before anyone invented the term, a lightning ride through language, deception, and murder. The book I find it most closely resembles is Paul Cain's crime thriller _Fast One_, duplicating its speed and moral relativism. In Bester's imagined future, Espers (telepaths) make murder impossible to commit, so mad industrialist Ben Reich just has to find a way to get away with it. The plot follows policeman Lincoln Powell, a powerful esper, in his quest to nail Reich, and Reich's delirious evasions. At stake may be the whole of society. I have only one negative thing to say for this book: it still isn't as good as Bester's other great novel, _The Stars My Destination_. Buy both of them today and plunge into the best of science fiction.

Published by Thriftbooks.com User , 21 years ago
Even 49 years after its initial publication, The Demolished Man still stands as a true science fiction novel. The story of Ben Reich living in a future world where mind reading is a commonality amongst a group known as 'Espers.' In a world without crime, for one can know when you will commit one, how is one to go about plotting a murder? Ben Reich has the perfect plan. This book captivated me from beginning to end when I read it 10 years ago and I continually reccomend it to those that enjoy science fiction. Author, Alfred Bester, won the first Hugo Award for Science Fiction for The Demolished Man. In my opinion this book is still the hallmark of science fiction novels, unfortunately, however, Bester himself is so unheard of in many literary circles and more so in the general public. I highly reccomnend this book for anyone who has a flare for science fiction.

Hugo series start with a bang

Published by Thriftbooks.com User , 21 years ago
The Demolished Man was the first novel to win the Hugo award. The book has everything: plot, strong characters. In the future, to committ a crime is an impossible task, due to all those telepaths running around. In case somebody do committ a crime, there is no prison ,what they do is just swipe your mind clean. However, Ben Reich decided that he will committ a crime anyway, He is even hired a telepath to help him to block his thougths. This is actually more the detective novel developing in Futuristic scenario. The Demolished Man is a novel of the future, where along with all new ways of life and powerful technology, only one thing remains unsolved: the mystery of human soul.P.S. Also if you like this novel read The Stars, My Destination. I think, this is the best novel Alfred Bester written.

Before Cyberpunk came The Demolished Man

Published by Thriftbooks.com User , 25 years ago
I could not understand why _The Demolished Man_, a classic in the science fiction field, has been out of print for so long. So when Vintage Books finally reissued it in July of this year, it signalled the end of a ten year search for a copy of the book, and it did not disappoint. The concept is intriguing. Ben Reich is the head of one of the largest corporations in the future, but one man, his rival D'Courtney, stands in his way, and so he must die. The catch: society is policed by Espers, people with telepathic powers, who make it virtually impossible for anyone to successfully commit murder and get away with it. Can Reich get away with murder? How he does it and how he tries to get away with it are just some of the questions that will be answered when you pick up the book. But be prepared. Fasten your seatbelts. The action is so fast paced that transitions virtually disappear. In a style that foreshadows William Gibson and the cyberpunks, Bester masterfully creates a decaying world whose ultimate survival depends on the capture of Ben Reich. And he keeps us guessing until the very end
Copyright © 2020 Thriftbooks.com Terms of Use | Privacy Policy | Do Not Sell My Personal Information | Accessibility Statement
ThriftBooks® and the ThriftBooks® logo are registered trademarks of Thrift Books Global, LLC