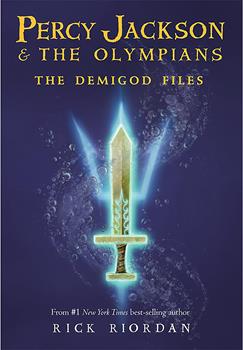 #1 NEW YORK TIMES BEST SELLING AUTHORA guide to the bestselling series, featuring original short stories, puzzles and gamesHow do you handle an encounter with Medusa on the New Jersey interstate? What's the best way to take down a minotaur? Become an expert on everything in Percy's world with this must-have guide to the Percy Jackson and the Olympians series. Complete with interviews, puzzles, games, and original short stories by Rick Riordan.

My son liked the Percy Jackson series so much.

Published by AG , 9 months ago
My son liked the Percy Jackson series so much, that he wants to collect the whole series. I say anything to get him to read more.

Published by lizz2018 , 1 year ago
Fantastic as always! I loved getting a look back at Percy's early relationships with a lot of key characters. Especially looking back at Nico, who has changed so much.

Published by aw , 4 years ago
percy jackson has been my favorite since childhood. book was in great condition.

you have to have this if you love percy jackson books!

A "Must Have" For Any Demigod Wannabe

Published by Thriftbooks.com User , 13 years ago
If you're one of those people who has already visited a bookstore to pre-order your copy of THE LAST OLYMPIAN, you're probably also counting down the days until the release of the thrilling conclusion to Rick Riordan's series about Percy Jackson and the Olympians. What's an aspiring demigod to do while waiting for the final installment in their favorite series? The answer might be found inside the top-secret DEMIGOD FILES, a perfectly snack-sized portion of Percy Jackson's adventures that just might tide you over until the main course. THE DEMIGOD FILES, a slim volume ideal for tucking into backpacks and pulling out during quiet reading time, is certainly aimed at the most dedicated Percy Jackson fans. They'll soak up details from the witty, candid interviews with Camp Half-Blood's most famous residents, including Clarisse La Rue, Annabeth Chase, Grover Underwood and Percy Jackson himself (sample question for Grover: "Who would you least like to meet in a dark alley --- a Cyclops or an angry Mr. D?"). They'll peruse the map of Camp Half-Blood, the illustration of Annabeth's fully loaded camp trunk, and the full-color portraits of Zeus, Poseidon, Athena, Ares, Percy, Annabeth, Grover and Chiron to see if the drawings match the world they've created in their imaginations. They'll challenge themselves with a crossword puzzle and word jumble, and reinforce their newfound knowledge of Greek mythology with a handy chart listing the primary Olympians who play key roles in Percy's life. What these rabid fans will most appreciate, though, is the collection of three Percy Jackson original short stories that make up the bulk of THE DEMIGOD FILES. In "Percy Jackson and the Stolen Chariot," Percy has to help his sworn enemy, Clarissa, when her brothers Phobos and Deimos (the immortal sons of Clarissa's dad, Ares) hijack the war chariot she's been entrusted with. In "Percy Jackson and the Bronze Dragon," a game of Capture the Flag gets even more out of control than usual, when a horde of Myrmekes (those would-be giant armored ants) battle the kids over a bronze dragon automaton that might also threaten their lives. And in "Percy Jackson and the Sword of Hades," Percy's plans for Christmas don't involve a voyage to the Underworld, but that's exactly what he gets when he, Nico and Thalia pay a call on Persephone. Throughout these entertaining and well-developed short stories, Riordan's trademark mix of adventure, humor and solid mythology is at play. Three short stories, two puzzles, plenty of interviews, pictures and lots of fun. Oh, and did I mention that there's a sneak peek of that concluding Percy Jackson novel? That in and of itself should make this slim volume, jam-packed with plenty of Olympian extras, a "must have" for any demigod wannabe. --- Reviewed by Norah Piehl

Published by Thriftbooks.com User , 13 years ago
My son couldn't put this book down! A great read for your 6/7th graders.

Published by Thriftbooks.com User , 13 years ago
This is a good addition to the series. It clarifies some of the plot lines and adds a few more stories to keep us hooked until we can read the final book in the series.

Published by Thriftbooks.com User , 13 years ago
This is a great book for young readers. I am a middle school teacher and I recommend this book to students who are fans of the Percy Jackson books. It contains three fun short stories that develop the characters of this great series even more. I read the book in one sitting and I have enjoyed going through it again.

Published by Thriftbooks.com User , 13 years ago
My son, age 9, and I have been reading this series. This book is great fun. The questions for the interviews are funny as are the responses. It looked to us like someone had a fun time putting this together. The short stories are true to character of the other longer books. This is a short read that adds to the series and expands on the information about the main characters in the longer books. Well worth the money Enjoy.
Trustpilot
Copyright © 2022 Thriftbooks.com Terms of Use | Privacy Policy | Do Not Sell My Personal Information | Cookie Preferences | Accessibility Statement
ThriftBooks® and the ThriftBooks® logo are registered trademarks of Thrift Books Global, LLC