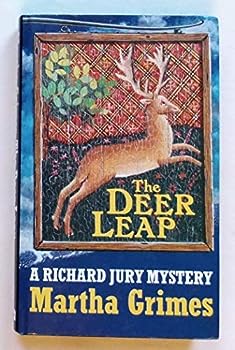 (Book #7 in the Richard Jury Series)

This description may be from another edition of this product. In a village plagued by missing pets, Scotland Yard's Richard Jury and sidekick Melrose Plant face the worst of human nature when a chilling old crime leads them to a brand new way to die.

A moment of Sanctuary...

Published by Thriftbooks.com User , 12 years ago
I am addicted to the Richard Jury mysteries by Martha Grimes, and the Deer Leap is another great one, although it is a sad one, too. I think Grimes is a bit like JK ROWLING--she's not afraid of having real life and real tragedy come to her characters, even the ones you love. I'm a mystery writer, and it's really hard to not want to protect your characters from the dangers of life. So, I really admire Grimes' ability to expose her characters to real danger and real heartbreak. The Deer Leap opens when a dead woman falls out of a phone booth, and mystery writer Polly Praed calls Jury and his ex-peer friend Melrose Plant to come Ashdown Dean to solve the mystery. They come and soon discover another mystery, a young brave girl name Carrie Fleet--an apparent orphan with no family and no fears. She carries a shotgun and protects injured animals. But who will protect Carrie Fleet when a murderer approaches??? Don't miss the Deer Leap! And buy a box of tissues for the end. You'll need it....

This One Packs an Emotional Punch

Published by Thriftbooks.com User , 14 years ago
The Deer Leap, by Martha Grimes, is the 7th book in this excellent series. This entry introduces us to the lovely and eccentric Carole-Ann Palutski who will become Jury's neighbor and friend. This setting for this moving novel is Ashdown Dean, and its local pub The Deer Leap. Mysterioulsy, people and pets have been disappearing or meeting their accidental demise. A local fox hunt takes place and a sad 15-year-old girl with a troubled past takes center stage. Melrose is summoned and he will need every bit of his wits and cunning to help Jury. This is another very strong entry in this compelling series. The melancholy mood never disappars in this novel, even in moments of fun. This one packs an emotional wallop. A strong 4 star novel. For those of you new to the series, I would recommend reading them in order for the best reading experience; however, they are also fun as stand alone novels. Here is the series in order: The Man with a Load of Mischief The Old Fox Deceived The Anodyne Necklace The Dirty Duck Jerusalem Inn Help the Poor Struggler The Deer Leap I am the only Running Footman The Five Bells and Bladebone The Old Silent The Old Contemptibles The Horse You Came In on Rainbow's End The Case has Altered The Stargazey The Lamorna Wink The Blue Last The Grave Maurice The Winds of Change The Old Wine Shades Dust

Perhaps The Most Poignant Of The Jury Series

Published by Thriftbooks.com User , 20 years ago
One sign of a well-crafted character is that the reader comes to care about that character with more than the detachment typical of fiction. Martha Grimes is one of a few talented authors who can create such characters seemingly at will, not only the repeating theme characters such as Richard Jury and Melrose Plant, but those whose appearance is abbreviated to the confines of a single volume. This Grimes does in the person of a young lady named Carrie Fleet. She, and the events surrounding her mysterious origin, constitute the central structure of the Deer Leap. Among other things, Carrie loves animals, and detests a local laboratory that engages in animal testing of consumer products. It is the graphic nature of Grimes' description of this that has put some readers off; however, it should be emphasized that Grimes has not jumped onto a PETA soapbox here. These scenes are tightly and economically written, and are necessary to the plot and especially to its harrowing denouement. Without giving too much away, it is in the resolution of these circumstances that we discover to our surprise that we care about certain characters perhaps more than we thought we did, and it is this resolution that makes The Deer Leap perhaps the most poignant of the Richard Jury series. The reader may curse Grimes for having gotten to him or to her, and that is one sign of a superb performance in authorship. This is a necessary continuation of the Jury series in other ways as well, for example, along the way we get to discover why Melrose Plant now carries a cosh instead of the more stylish sword-cane he used to carry. And that is really all this reviewer can squeeze in without giving away the surprises. Once a reader has finished The Deer Leap he or she will not be able to read any of the Richard Jury series quite the same way again.
Copyright © 2020 Thriftbooks.com Terms of Use | Privacy Policy | Do Not Sell My Personal Information | Accessibility Statement
ThriftBooks® and the ThriftBooks® logo are registered trademarks of Thrift Books Global, LLC