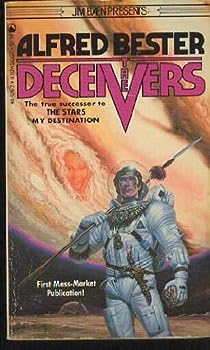 This description may be from another edition of this product. When his lover is kidnapped by the evil Duke of Death, Rogue Winter, King of the Maori Commandos searches the solar system for her and uncovers evidence of an unlimited energy source in the...

Nothing new, but the old is damn good

Published by Thriftbooks.com User , 20 years ago
I don't have too much to say about this book, except that it is deffinately worth reading. I've seen most of the concepts preseted in this book (chemically altered super genius, shapeshifting aliens, human/alien marriages, etc.) but everything a new twist, a special touch that makes this a fun and interesting read. It only took me a day to read, so one doesn't have to commit much time or effort to this book. For that reason, I'd recommend this book to anyone, not just fans of Bester or sci-fi in general.

Published by Thriftbooks.com User , 20 years ago
I agree with most of the other reviews: it is a fun Bester book (not as depressing as "Golem 1000", for example) but it is not in the same league as "The Demolished Man" or "Tiger, Tiger". Why 4 stars, you ask? Well, considering the quality of Bester's works, even his worst is still better then most of the pure-fun SF you can read from other authors.

The Weird Worlds of Alfred Bester

Published by Thriftbooks.com User , 22 years ago
While it's not "The Stars My Destination," this book still soars from its compilation of "Besterisms": an intriguing plot; unusually-named characters with an array of equally unusual (but charming) eccentricities; and the late author's natural gift for masterfully playing the English language like a Stradivarius. Definitely recommended!

Published by Thriftbooks.com User , 22 years ago
although not bester's best work, this novel of adventure and intrigue does justice to the author's memory--and features a lovely tribute to Bester from his long-time agent. To my mind, a better book that was originally credited when it first appeared.

FINALLY BACK IN PRINT!!!

Published by Thriftbooks.com User , 22 years ago
THIS WAS BESTER'S CLOSEST ATTEMPT TO DUPLICATE THE DAZZLING WORLD OF STARS MY DESTINATION. THIS IS A HANDSOME EDITION COMPLETELY RESET AND WITH AN UNHERALDED AFTERWORD BY FORMER AGENT AND COLLEGUE JULIE SCHWARTZ THAT RECOUNTS BESTER'S INVOLVEMENT WITH DC COMICS, GREEN LANTERN'S OATH. ETC. FUN!
Copyright © 2020 Thriftbooks.com Terms of Use | Privacy Policy | Do Not Sell My Personal Information | Accessibility Statement
ThriftBooks® and the ThriftBooks® logo are registered trademarks of Thrift Books Global, LLC