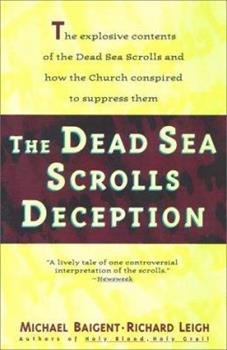 by Richard Leigh and Michael Baigent

The oldest Biblical manuscripts in existence, the Dead Sea Scrolls were found in caves near Jerusalem in 1947, only to be kept a tightly held secret for nearly fifty more years, until the Huntington Library unleashed a storm of controversy in 1991 by releasing copies of the Scrolls. In this gripping investigation authors Baigent and Leigh set out to discover how a small coterie of orthodox biblical scholars gained control over the Scrolls, allowing...

Published by The Old Ranger , 7 months ago
Beginning in 1989, Baigent and Leigh co-authored several books, most prominently The Dead Sea Scrolls Deception (1991), in which they primarily followed the controversial theories of Robert Eisenman concerning the interpretation of the Dead Sea Scrolls. This was discredited by Otto Betz and Rainer Riesner in their book Jesus, Qumran and The Vatican: Clarifications (1994). In 1999, Baigent and Leigh published The Inquisition. Bernard Hamilton, writing in the English Historical Review, described the book as pursuing "a very outdated and misleading account", which ignored all modern development in Inquisition Studies and grossly exaggerated its power and influence, to the extent of being polemical. Writing in the Spectator magazine, Piers Paul Read deemed the authors to have penned a misinformed diatribe against Catholicism, with nil interest in "understanding the subtleties and paradoxes in the history of the Inquisition". A review in The Independent noted it to be mostly drab and uncontroversial, in reiterating facts which were already known for decades but which progressively gave way to hysteria, in its bid to draw a parallel between the ancient institution and current abuse of power by Catholic authorities. Dongwoo Kim, writing in Constellations, noted the book to not be a significant contribution in the field, in that it was an epitome of Whig historiography which sought for a binary categorization of the past between good and evil, while locating the Catholic Church as the "antithesis of modernity and liberalism". Baigent himself conceded that none of his theories yielded any positive results: "I would like to think in due course a lot of this material will be proven," he said, "but it's just a hope of mine."

Published by Thriftbooks.com User , 15 years ago
This is a fascinating book about two controversial topics. The first one is how the International Team dominated by Roman Catholic Fathers controlled the possession and withheld all information from the Dead Sea Scrolls since their discovery in 1947 until 1991 when the Huntington Library in California released complete set of photos of the Scrolls. The second topic is Pauline Christianity or how this religion was really created by Paul. There are no valid reasons why a team of Roman Catholic Fathers should have withheld information about the Scrolls for 44 years. By comparison, the Nag Hammadi Scrolls (the Gnostic Gospels) discovered in 1945 had been accessible to outside scholars and nearly completely translated by 1979. Meanwhile, very little published translation regarding the Dead Sea Scrolls occurred prior to 1991. The exceptions were the few published translations from John Allegro regarding the few Scroll sections under his responsibility. Allegro was the only secular member of the International Team. His releasing information caused his being ousted from the Team. The Roman Catholic dominated International Team was adamant in censoring the translation of the Dead Sea Scrolls. Their purpose was to distance the history of the related Qumran Judaic community from Jesus times and the onset of Christianity. They wanted to preserve the uniqueness of Jesus as a human being-God founder of a new religion. The International Team attempted to distance the Dead Sea Scrolls from the New Testament in two ways. First, they conveyed that the Qumranic community was isolated and out of touch with its cultural surrounding. Second, they maintained that the Dead Sea Scrolls dated from much earlier than Jesus time. Thus, this community would have had no interaction with Christian times. However, they had no evidence to support their claims. Robert Eisenman observed that coins found at the Qumran excavation sites dated from 135 B.C.E. to 132 C.E. This suggested that the Dead Sea Scrolls had been written during a period overlapping Jesus time. Since then, carbon dating of the Scrolls has confirmed comparable dates from 200 B.C.E. to 70 C.E. Eisenman research suggests that far from being isolated, the Qumran community was a cultural, military, and religious Judaic center. He also advances that Jesus was a messiah belonging to the Zealots, one of the Judaic sects of the time. Chapter 12 is a fascinating analysis of The Acts demonstrating that Christianity was the creation of Paul who never met Jesus. This is referred to as Pauline Christianity. The chapter describes how Paul rebelled against the Judaic law and beliefs, including Jesus original teachings. Paul decides to turn Jesus into a God. To do so, he assigns miracles to Jesus including his birth from a virgin mother, walking on water, multiplying the breads, and the resurrection. None of the miracles have any supporting historical evidence. Paul's splitting from Judaic trad

Published by Thriftbooks.com User , 20 years ago
Hidden for nineteen centuries, the Dead Sea Scrolls-the earliest biblical manuscripts-were found in caves near Jerusalem more than forty years ago. Yet the content of a large part of the eight hundred ancient Hebrew and Aramaic manuscripts remains concealed from the general public.In this remarkable book Michael Baigent and Richard Leigh, authors of the best-seller Holy Blood, Holy Grail, reveal new material that places the Scrolls in the time of Jesus and offers nothing less than a new account of Christianity and an alternative and highly significant version of much of the New Testament.Working closely with Professor Robert Eisenman-one of the foremost experts in biblical archaeology and scholarship-and with other scholars in both America and Britain, Baigent and Leigh set out to discover why the content of the Scrolls was kept secret for so long. Their investigation began in Israel, led to the corridors of the Vatican, and into the offices of the Inquisition. They encountered a rigidly held "consensus" on interpretation and dating, and discovered just how fiercely orthodox biblical scholarship was prepared to fight to retain its monopoly on the materials and their interpretation.But The Dead Sea Scrolls Deception is much more than an expose of a bitter struggle among scholars. Extensive interviews, historical analysis, and a close study of both published and unpublished materials led Baigent and Leigh to startling new views about the early Christians-for the Scrolls identify the group known as Christians as a band of fervent theocratic revolutionaries intent on breaking- Roman control of the Holy Land and restoring the kingdom of Israel to its rightful Judaic dynasty, of which Jesus himself was a member.The Dead Sea Scrolls have been news since their discovery, and with the release of the Scrolls themselves by the Huntington Library, they are on front pages and in prime time all over America. This remarkable book tells the story of a great archaeological find and the mysteries surrounding it.
Trustpilot
Copyright © 2022 Thriftbooks.com Terms of Use | Privacy Policy | Do Not Sell or Share My Personal Information | Accessibility Statement
ThriftBooks® and the ThriftBooks® logo are registered trademarks of Thrift Books Global, LLC