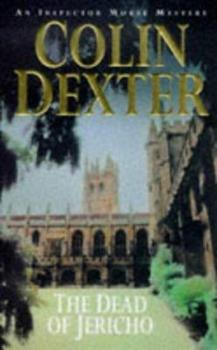 The Dead of Jericho

(Book #5 in the Inspector Morse Series)

This description may be from another edition of this product. " MORSE IS] THE MOST PRICKLY, CONCEITED, AND GENUINELY BRILLIANT DETECTIVE SINCE HERCULE POIROT." --The New York Times Book Review He meets her at a suburban party. They share a flirtation over their...

Put Colin Dexter on your Must Read Series List!

Published by Thriftbooks.com User , 17 years ago
Colin Dexter's Inspector Morse series is a must read for mystery fans. Notice that I say the series, not just a specific book. They are all equally good and each one is unique in it's mystery and puzzle. In this book a woman that Morse had met at a banquet is found hanging in her kitchen. Did she commit suicide or was she helped. Morse needs to find out because the woman had left an impression on him six months before at the banquet. By the time the reader gets to the end of the book there is another death that is most certainly a murder in the Jericho section of Oxford (in fact next door to where the woman was found). Morse knows that the two deaths are connected, but what a convoluted puzzle for him to figure out. Everyone involved is lying and that doesn't make it any easier for him, but the irascible Morse figures it out in the end. These books are extremely well-written, and a real joy to read since they are so well-written. The plots are always extremely clever, and they keep you guessing right until the end.

Published by Thriftbooks.com User , 23 years ago
A chance, flirtatous encounter between Inspector Morse and a friend of a friend provides the context for Inspector Morse's interest in a tawdry suicide. The brooding Chief Inspector contemplates what might have been as suicide turns to murder, and murder again ! Sergant Lewis and Coroner Max Bell provide a delicious counterpoint to a puzzle with a light literary undercurrent. A good read !

Published by Thriftbooks.com User , 23 years ago
This book is good, yet it is just like any other ordinary mystery book. It has a boring start, but as the story progresses it gets more intense. It starts off like a mystery book. The detective meets with a lady. They get to know each other and later on the lady is found dead in her home. Murder? or Suicide? --The detective is on the search for answers.

A Mystery Book that must be read.

Published by Thriftbooks.com User , 23 years ago
In the beginning of the story, it was just like another typical mystery story. After a while, the story was getting really exciting. The ending was smashing and the characters was great.I highly recommend this to everyone.
Copyright © 2020 Thriftbooks.com Terms of Use | Privacy Policy | Do Not Sell My Personal Information | Accessibility Statement
ThriftBooks® and the ThriftBooks® logo are registered trademarks of Thrift Books Global, LLC