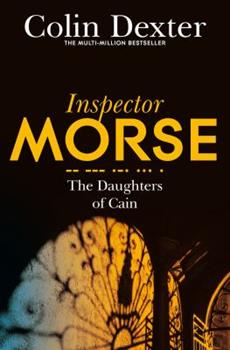 (Book #11 in the Inspector Morse Series)

This description may be from another edition of this product. "Audacious and amusing . . . may be the best book yet in this deservedly celebrated series."-- The Wall Street Journal It was only the second time Inspector Morse had ever taken over a murder enquiry...

"Set apart from the rest of their kind by the sign of the murderer...the mark of Cain."

Published by Thriftbooks.com User , 15 years ago
In one of the best of the Inspector Morse series, author Colin Dexter juggles several intricate plot lines, keeping the reader totally absorbed in each subplot and, especially, in the lives of the characters before he deftly brings them all together in a satisfying ending. Assigned to take over the investigation of the stabbing death of Oxford professor Felix McClure in his campus quarters, Inspector Morse learns that a student neighbor of McClure committed suicide--and was a drug user. Morse, assisted by Sgt. Lewis, his less articulate but clever assistant, begins the murder investigation by exploring whether McClure may have discovered the drug supplier. At the same time, other plot threads are unfolding: Mrs. Julia Stevens, a well-liked high school teacher of "reluctant learners," celebrates her birthday with a cake made by her housekeeper, a severely abused wife. Ted Brooks, formerly a "scout" (custodian) at McClure's Oxford housing and now a museum guard/guide, has recovered from the heart attack he suffered the night McClure was murdered and has an airtight alibi. Elly Smith, who uses the professional name of "Kay" or "K," a young prostitute, is connected to at least five of the characters (and unites the plot lines). When Ted Brooks is found stabbed to death, and further investigation turns up numerous connections among the various characters, the mystery is off and running. As is always the case in this series, a new woman figures in Morse's life. Dexter excels here in creating female characters with whom the reader identifies, and as the lives of these women unfold, their attempts to overcome the hardships life has dealt them elicit sympathy and understanding, not only in the reader but in Inspector Morse, too. The mystery is fast paced and filled with unexpected twists and turns, but as it develops and moves to its conclusion, it is the female characters who generate the movement and keep the reader's interest. The satisfying conclusion is surprising, since it does not tie up all loose ends, leaving some uncertainties which are, themselves, highly satisfying. n Mary Whipple

Published by Thriftbooks.com User , 16 years ago
The Morse series is an extremely intelligent and wonderfully written series. This book is one of the stronger ones in a series of very strong books. Nothing prepares you for the denouement in this book - not even if you've seen the serialized version from BBC. It is powerfully written and hits with an explosive power. In the book Dexter explores the female psyche and does a very good job of depicting the power of female friendships. He also does not hold back any punches when it comes to revenge for past wrongdoings and the effects that evil people have on the people that they are in contact with and live with. It starts with the murder of a College Don, but the case leads Morse down a winding and tortuous path that exposes the power of hate and retribution. On the way he even finds love, and the way that Dexter depicts this fresh blooming love is memorable in the simplicity in which he describes it. It's like watching an unfolding flower. This is a great novel, and I highly recommend this entire series.

The first novel i ever read

Published by Thriftbooks.com User , 19 years ago
This book was the first proper novel that i ever read. Several years ago now. And it has brought me so far...It instilled in me my passion for the mystery/detective/thriller genre, and reading itself. It brought me to treasure, above many other things, the importance of a novel's characters, and to consider least of all the actual quality of the prose. This book is undoubtedly written brilliantly, but i enjoyed it so much that i didnt notice. And that told me an important lesson: It does not matter how well a book is written, as long as you enjoy it. (For even if this was written badly, i would still have enjoyed it.)Morse himself is a puzzle wrapped in so many enigmas and conundrums that his character at times resembles and onion. Even by the final novel, we have not really found out what makes him tick. He remains a puzzle to the last.Lewis is a very likeable man, an impressive Watson to Morse's Holmes. He is a simple man, but at times can be just as puzzling as Morse. The plot with this one is simple but incredibly effective. It tells the tale of harmed women, and the revenges that they take. There is one woman in particular who stands out, and that is the teacher, Julia. She is an incredibly strong character, and a rather moving one in how devoted she is to her friend, and her motives for it. This is a very strong novel, with a truly fitting title. It is an exemplary book of detection, with very strong characters and a very powerful plot. Until he retired, it is truly so that Dexter was probably the best living male crime writer we in Britain had. We lament his departure.

Published by Thriftbooks.com User , 21 years ago
I was a bit wary about starting this novel--I didn't care for THE WENCH IS DEAD or THE WAY THROUGH THE WOODS (found them horribly dull, actually)--but I decided to give it a try. It was well worth the effort; of all the Dexter mysteries I've read, THE DAUGHTERS OF CAIN is easily the best.A former Oxford professor, Dr. Felix McClure, is found stabbed to death in his flat, and as usual, Inspector Morse and his faithful Watson, Sergeant Lewis, are assigned the case. The two discover a suspicious connection between McClure and a ne'er-do-well named Ted Brooks, who himself vanishes suddenly. As you'd expect from the title, the cast of suspects is almost exclusively female, and Dexter does a fantastic job of probing the passions--both love and hatred--that drive women to murder.Interestingly enough, the most perplexing question is not so much whodunit as howdunit, and the solution that Dexter provides is very tricky, and very clever. You'd be hard-pressed, though, to find a writer plays more fairly with clues; all the information necessary to deduce the solution is there, albeit hidden in plain sight.But this novel entertains on many levels, plot being the least of them. With Morse at his grumpy, endearingly brilliant best, and Lewis acting once again as the perfect comic foil, the journey is as much fun as the destination. The story is well-paced, and all the characters are so thoroughly engaging that even the less action-packed segments (which basically means the whole book--this is a British mystery, after all) are fascinating. Finally, no other writer in the English language writes quite like Colin Dexter, whose impeccably idiosyncratic prose is a joy to read. The dialogue is frequently hilarious, the social observations are sharp but subtle, and the use of language (words like "dolichocephalic" pop up more than once) is marvelously quirky. In all, a delightfully sophisticated, immensely satisfying piece of writing.

Published by Thriftbooks.com User , 24 years ago
Having long been a fan of Colin Dexter's rogue Inspector Morse, Daughters of Cain provided hours of enjoyment matching wits and witicisms with the irrascible Oxford sleuth. Morse is up against a baffling murder inherited from a colleague who left the bloodied trail cold and unsolved. Morse along with his faithful, long suffering Sergeant Lewis must pick up the tangled threads and make some sense out of the sensless. An Oxford Professor has been brutally stabbed to death and the trail leads to the brutal college handiman who may or may not have been dealing drugs. When the prime suspect vanishes, Morse is left to sort out an overabundance of suspects including the brutal handiman's wife, abused step-daughter prostitute and an Oxford School Teacher. Dexter's chapter openings of quotes and aphorisms add to the enjoyment as the reader tries to find the thread which leads to the next clue which wraps up the conclusion is a very fullfilling climax. Morse satisfies while giving some well needed exercise to the cerebellum.
Copyright © 2020 Thriftbooks.com Terms of Use | Privacy Policy | Do Not Sell My Personal Information | Accessibility Statement
ThriftBooks® and the ThriftBooks® logo are registered trademarks of Thrift Books Global, LLC