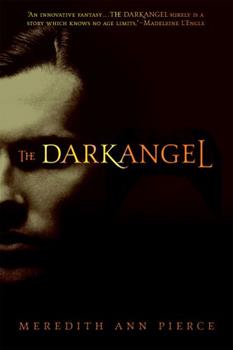 (Book #1 in the Darkangel Trilogy Series)

The Darkangel, a vampire of astounding beauty and youth, can only summon his full power when he finds his 14th and final bride. But for Aeriel, whom he kidnaps to serve his brides, there is something about him - something beyond his obvious evil - that makes her want to save him rather than destroy him.

Published by Thriftbooks.com User , 17 years ago
Meredith Ann Pierce's "The Darkangel" is the first book in a stylized epic trilogy set in a world that is so dry and thin-aired it can barely support its population - although it manages to do so through magic and machinery. The world has been cursed by the White Witch and her seven unnatural sons, the darkangel vampyres. Aeriel is a slave, a foreigner in Avarra, the country of her mistress, Eoduin. A marriage is to take place in their village and, as customary, Aeriel and Eoduin are out gathering nectar-flowers for the wedding. Without warning, Darkangel, the dark-winged vampyre, sweeps down upon them and carries off the lovely Eoduin to be his 13th bride. The young slave is blamed by Eoduin's parents for the kidnapping. Now, alone, bereft, without her lady, who has also been her beloved companion since infancy, Aeriel seeks to be taken by the same Darkangel in order to find and avenge her mistress. Returning to the scene of the kidnapping, she sees the face of the Darkangel for the first time when he comes to take her to care for his thirteen wraithlike wives, including Eoduin. Aeriel is awed. "Then he opened his wings, and Aeriel found she could not move for wonder. Before her stood the most beautiful youth she had seen. His skin was pale and white as lightning, with a radiance that faintly lit the air. His eyes were clear and colorless as ice. His hair was long and silver, and about his throat he wore a chain: on fourteen of the links hung little vials of lead." Darkangel flies Aeriel to his gargoyle guarded castle. Her task is to weave clothes for the thirteen wraiths. Although once beautiful young women, as each becomes the Darkangel's bride, she, overnight, turns into a withered creature with no blood, no heart, and no soul. All their souls hang around their husband's neck in vials of lead, to be given to the Water Witch, a lorelei, after he collects just one more. In only twelve months, the last bride will be taken and he will become the true seventh vampyre son. Aeriel's dilemma is whether to destroy her vampyre master for his evil deeds or to save him for the sake of his beauty. She has seen a spark of greatness through the ugliness of his spirit. The miserable wraiths and Talb, a dwarf-like man who lives underground, convince Aeriel to kill him. They have been victims for a long and terrible time. So, she sets off on a dangerous quest, (aren't they all?), to find what is necessary to rid the world of the monster. Filled with faery legends and lore, this is both a fascinating myth-like tale and a dark romance. The icarus vampire shines here as dark goth hero. He himself has been cursed by the Water Witch to live with a heart of lead. "Darkangel" is an enchanting novel geared for ages 12 and up, but so elegantly written that most adults who like fantasy should enjoy it immensely. I did. JANA

A pensive fable of Lunar vampyres

Published by Thriftbooks.com User , 20 years ago
Meredith Ann Pierce published "The Darkangel" in 1982, well before the current 'Buffy the Vampire Slayer' craze. Pierce's heroine, Aeriel is kidnapped by a darkangel to spin and weave for his twelve-and-one bride-wraiths, whose blood he has drained and whose souls he has imprisoned in his necklace. He needs to find a fourteenth bride and go through a final blood-sucking, soul-stealing marriage ceremony before he can become a true vampyre.Luckily, Aeriel doesn't strike him as bride-material: "'You?' he cried, and Aeriel's heart shrank, tightened like a knot beneath the bone of her breast. 'You be my bride? By the Fair Witch, no. You're much too ugly."The darkangel himself is quite something to look at:"Then he opened his wings, and Aeriel found she could not move for wonder. Before her stood the most beautiful youth ever she had seen. His skin was pale and white as lightning, with a radiance that faintly lit the air. His eyes were clear and colorless as ice. His hair was long and silver, and about his throat he wore a chain: on fourteen of the links hung little vials of lead."To continue with the story, the beautiful darkangel flew forth from his castle to find a princess, and instead found Aeriel, the mud-bud (an appellation borrowed from Carol Burnett's retelling of "The Princess and the Pea")."The Darkangel" resembles "The Princess and the Pea" in that Aeriel is a sort of 'bride-in-disguise.' The aspiring vampyre doesn't realize that he wants to marry her until after she has made friends with his previous thirteen wives, suborned his vicious gargoyles, escaped from his castle, and almost got him killed by a Lunar lion.I can't give away any more of the plot, but I'd like to add that you need to be in the right frame-of-mind to truly appreciate the beauty of "The Darkangel"---pensive, perhaps and willing to believe in the magical power of love. (You also need to believe that someday it will be possible to terraform the Moon)."The Darkangel" has two sequels: "A Gathering of Gargoyles"; and "The Pearl of the Soul of the World."

This book is what started it all...

Published by Thriftbooks.com User , 20 years ago
I found this book many moons ago at a school book fair. I was attracted to the cover and after reading the back of the book...I had to buy it. It was the only book I bought at the fair. Was I lucky!!! It turned out to be one of the greatest books I'd ever read. That was over 17 years ago...and I can still honestly say that the story still moves me to this day. The story of Aeriel and Irrylath, which carries on through the two remaining books in the trilogy, is what started my "love" affair with vampires and vampire novels. But this trilogy, unlike many other vampire series, is more fantasy based and driven. It doesn't stick with the same myths and legends surrounding vampires. Instead it interweaves a very human story...the journey of a young girl who learns a great deal about herself, her heritage, true love, and what life is all about...on her quest for vengence. There are elements of magic, mystery, ancient gods, and mystical far off lands throughout the series. Not to mention the romantic and tragic thread woven in as well. This series has it all. It is a must read for anyone who loves a good fantasy novel...and a definite for any vampire enthusiastist who like a tale told with a new and inviting twist. The Darkangel is a literary delight for young and old fantasy lovers alike.

surely one of my favorite books of all times

Published by Thriftbooks.com User , 21 years ago
I found this title when I saw a list of Magic Carpet Books on the back of a novel. I started reading The Darkangel because the summary sounded interesting. Sure enough, the book had a very early narrative-hook (and more as the story went on), and I just had to read it through in one day. Meredith Ann Pierce superbly accounts a story about a young slave, Aeriel, looking to find revenge for her beautiful mistress, Eoduin, who was captured and taken as a bride by the darkangel. Instead, she finds adventure, mystery, and a dash of romance along the way. There's just enough twists to make the plot interesting and intricate, but not too complicated. Anyone who likes romantic fantasies will fall in love with The Darkangel.

Meredith Ann Pierce is one of the best authors on Earth!

Published by Thriftbooks.com User , 22 years ago
From the minute I started reading, I knew this was a great book. I loved the author's Ms. Pierce's descriptions of the characters, especially the darkangel and Aeriel. The setting was great too. The book begins with Aeriel and her mistress, Eoduin gathering hornflowers, when suddenly a darkangel (aka icarus) appears and carries Eoduin away to his domain to be his bride. A day or two later Aeriel decides to avenge Eoduin's aduction and goes to the place where she was taken. The icarus soon arrives and just as Aeriel was about to kill him, he unfolds his wings to reveal the most beautiful person Aeriel has ever seen. Then the darkangel carries her off too, also to his domain. There Aeriel serves as a servant and as time passes she knows that she has to kill the icarus before he finds his final bride. To find out what happens, READ THIS BOOK!!!!!!!!!
Copyright © 2022 Thriftbooks.com Terms of Use | Privacy Policy | Do Not Sell My Personal Information | Accessibility Statement
ThriftBooks® and the ThriftBooks® logo are registered trademarks of Thrift Books Global, LLC