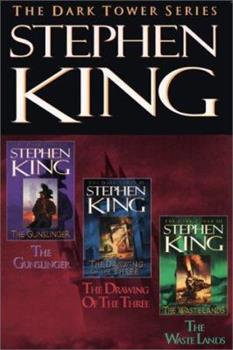 (Part of the The Dark Tower Series)

the makings of a classic

Published by Thriftbooks.com User , 21 years ago
I've just finished re-reading the DARK TOWER series for the second time and I found it even more engrossing. the first time I read it I read it out of order and not in series. This time However I was able to sit down and read it in order the way it should be(I also have WIZARD AND GLASS). This epic adventure begins with the words "The man in black entered the desert and the gunslinger followed" and that sets the tone for the story. the first book THE GUNSLINGER introduces us to a world that is "moving on", and to our hero Roland.We glimpse bits and pieces of Rolands world and our own (which is somehow related to rolands). I don't like to tell the story you have to read it so let's Move on to book two. In THE DRAWING OF THE THREE Roland meets up with the members of his KA-TET With whom he will share many great adventures on the way to find THE DARK TOWER.The third book of the seriesTHE WASTE LANDSis non stop adventure for our hero and his group of friends. Let's just say it will change the way you look at train travel! This series is by far Stephen Kings best work and it delves into a realm of science fiction that isn't usually written about.What is the earth going to be like 8000-10000 years after we finish ruining it.(That is my personal opinion of the setting. The books never reveal the exact time relationship)This is a story that can be read over and over and will leave you waiting on the edge of your seat for the next volumne. Also the art work is wonderful, although I preffer the third books the best. If you don't have any of the books yet then this set is the way to go because it will allow you to read them in order and straight through. The way you will want to once you have been DRAWN into this strange and wonderful world.

The Best of Stephen King

Published by Thriftbooks.com User , 22 years ago
I have read over 40 of Stephen King's books since 1975 and nothing but The Stand compares to the scope and sheer wonder of Stephen's Dark Tower series. The characters and descriptions of Roland's world are beyond anything I have ever read before, and I have read thousands (really) of books in my 48 years. I would also like to recommend in addition to these books a short story he wrote called The Little Sisters of Eluria in a volume called Legends in October of 1998 that deals with Roland. It is exceptional. Please write more Stephen!

Published by Thriftbooks.com User , 22 years ago
I usually read sci-fi/fantasy, but Stephen King's Dark Tower series is by far the greatest set of books I've ever read. The characters are realistic, the plot pulls you in, and of course it is extremely well written. I can easily compare it to Tolkien's Lord of the Rings, Herbert's Dune, and Asimov's Foundation series. If you're a Stephen King fan, get it; if you like sci-fi/fanasy, get it. Well worth your money.

Wanna see the connections in his other books?

Published by Thriftbooks.com User , 23 years ago
For those of you who have read this series, as well as all of King's other books, you know that there are links in some of his other books back to the Dark Tower series. For those of you who don't know, here it is. Go buy Insomnia, and Hearts In Atlantis. I think you'll find the connections to the Dark Tower series rather interesting. They are somewhat more subtle in Insomnia, but are quite obvious in Hearts In Atlantis. Hearts In Atlantis is a must read for those who are hooked on The Dark Tower. Personally, I think it reveals where King is going with the Tower and the characters linked to it by revealing some of the things going on in Roland's world. Oh, and another one to check out is a book called Legends Volume I. It includes a short story about Roland, placed sometime before the first book in the series. A definite must read.

Published by Thriftbooks.com User , 23 years ago
"The Dark Tower" series is the very core of Kings' work and it is plain to see that this is his best writing. This is not one of his typical horror storys, and even if your not a King fan, I'm sure you'll love this one. A story that is still yet to be complete (4 books so far) and leaves readers itching for the next part. It set in a mysterious world of fantasy but some how is so real like it will draw you in. This is the master's masterpeice. An absolute must...Join the quest for the elusive Dark Tower...
Trustpilot
Copyright © 2022 Thriftbooks.com Terms of Use | Privacy Policy | Do Not Sell or Share My Personal Information | Accessibility Statement
ThriftBooks® and the ThriftBooks® logo are registered trademarks of Thrift Books Global, LLC