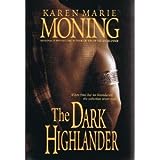 (Book #5 in the Highlander Series)

Karen Marie Moning, where have you been all my life?

Published by Thriftbooks.com User , 18 years ago
Lately, I've been scouring the book store Romance section for a decent romance novel and I have been disappointed time and time again...until The Dark Highlander. Wow, this book was such a pleasant surprise! I really loved it. The story was engaging and the characters were very lovable.I will spare you my summary of the plotline as may others have outlined the story. I only want to put my two cents in because I have to stress how much I liked this book. Especially, the hero, Dageus. Boy oh, boy! Dageus is a romance novel hero to end them all: tall, dark, handsome, brooding, very alpha-male, and too sexy for words, but he doesn't stop there. He is also smart. Smart as in Albert Einstein smart. This may sound a bit farfetched, but once you read the book, it will make perfect sense. Moreover he is a sexual dynamo without being cheesy. I have to say that KMM writes some of the best erotic scenes that I have ever read.With all the above said, I have to also stress that the story becomes extremely emotional and heartwrenching near the end. When you read what Dageus' father says to him near the end and how Chloe, the intrepid heroine, reacts to events, you will feel your heartstrings being tugged. The familial relationship was just beautiful to read about. The words and feelings that Dageus conveys to Chloe will make you sigh with longing. KMM really knows how to squeeze a girl's heart!So, don't walk...run to the bookstore and get this one. I haven't read any books this satisfying since Linda Howard's "After the Night". I hope you will not be disappointed.

Published by Thriftbooks.com User , 19 years ago
Quickly becoming the master of time travel romance, Ms. Moning follows KISS OF THE HIGHLANDER, Drustan's tale, with her latest work, the story of his twin brother Dageus MacKeltar. Though Dageus traveled through time to save his brother, doing so for personal reasons was in violation of an ancient pact. As punishment, Dageus is consumed with thirteen evil ancient beings that threaten to take over his soul. Ironically, his only relief from the dark spirits occurs when he is engaged in sexual activity. When Chloe Zanders' employer asks her to take an ancient book over to a client's New York apartment, she reluctantly agrees. Dageus, the client, is absent when she first enters his penthouse and discovers among recently stolen museum artifacts, other objects attesting to his sexual proclivity. Caught snooping under his bed, Chloe is mortified with the appearance of Dageus, the most handsome virile man she has ever met. His refusal to let her leave renders Chloe with unwitting feelings of attraction and bewilderment from this utterly fascinating man. Helplessly falling under his spell, Chloe journeys with Dageus to visit his identical twin brother in Scotland. As Chloe and Dageus journey back to his sixteenth century world, she learns of the dark force that threatens to claim him and desperately hopes that with her love and help, they can defeat the evil that wants to consume his soul. Ms. Moning writes some of the most sensual love scenes in historical romance, and this latest read is proof positive of that fact. Much to her credit, the sexual encounters are well integrated into the plot line and exude feeling, eschewing the gratuitous sex often found in romance novels. This is quite possibly her best work to date, chock full of romance, time traveling suspense, and eerie mysticism.

Published by Thriftbooks.com User , 19 years ago
THE DARK HIGHLANDER is intense, deep, and dark. For that reason, some readers may be put off by it, expecting a romance more like the light, funnier predecessor KISS OF THE HIGHLANDER. This cannot be a light read because of the character of Dageus and what he sacrifices (himself) in order to save his brother in KOTH.Dageus is a spiritually tormented hero, which crosses over into the physical. Battling the 13 evil entities means he must try in any way to keep them at bay. Sex is his way of holding onto this life. This is also a time travel, but not in the sense that he is going to a place he's never been, such as in KOTH. Dageus is already in the future and must return to his own time in order to try and find the information he seeks to try and cure himself of these dark beings.He's a darker version of Drustan, a more compelling hero that Drustan simply because he has to be. Chloe is the perfect heroine for him in that she is skeptical at first, but is slowly drawn into his world. She doesn't back down from the challenges that face her, but rather steps boldly with Dageus into an uncertain future. What I loved most about Dageus, though, is his love for his brother. He literally sacrifices himself in order to save Drustan, then again to save Chloe. It's rare for me that a book will bring me to tears, but the scene with his father did just that.If you love intense, dangerous but courageous heroes, Dageus' book is one you will not want to miss. The Celtic lore that is the backbone of his plight might get too detailed for some to handle, but if you really pay attention, it really works for this story. I've read some of the previous reviews and am a little surprised that some found that the love scenes were not hot. I guess they were skimming pages and didn't read the scenes where the tension was built up nicely and the love scenes were well-written. THE DARK HIGHLANDER just proves to me that Moning's writing just gets better with each book she writes. It'll be hard for her to write a better hero than Dageus, though, but I'm sure she's up for the task. Moning is an exceptional writer and I thank her for giving us Dageus' story.

Published by Thriftbooks.com User , 19 years ago
Druid mage Daegus MacKeltar used his powers to travel back in time to save the life of his twin brother Drustan (see TO KISS A HIGHLANDER). However, Daegus pays a high price for his good deed as he released the spirits of thirteen evil Druids that share residency with him in his body. Desperate to re-incarcerate these malevolent beings, Daegus steals ancient Celtic texts in search of the spell that will do this. The Manhattan press dubs the thief the "Gaulish Ghost".Medieval expert Chloe Zanders is shocked to learn that a curator of the Cloisters collection wants her to deliver a five century old reprint of the third book of Mannannan to some private collector who has provided artifact donations in exchange for reading the text. A wary Chloe delivers the book to Daegus, who recognizes his soul mate has arrived. Holding her prisoner, Daegus and Chloe travel to Scotland where he hopes to free his soul by imprisoning the Druids and to persuade her that they belong together through time and space.This sequel is a great romantic fantasy that should provide Karen Marie Moning with a loyal cross genre audience awaiting her next book. The story line is action-packed, filled with tension, and never slows down even when the lead heroes debate their fate and attraction. The good vs. evil battle will hook fantasy readers with its feel of authenticity even with magic, incantations, and otherworldly demons. Ms. Moning seems heading to the read realm of greatness with THE DARK HIGHLANDER proving she is one of the best writers on the market today.Harriet Klausner
Copyright © 2020 Thriftbooks.com Terms of Use | Privacy Policy | Do Not Sell My Personal Information | Accessibility Statement
ThriftBooks® and the ThriftBooks® logo are registered trademarks of Thrift Books Global, LLC