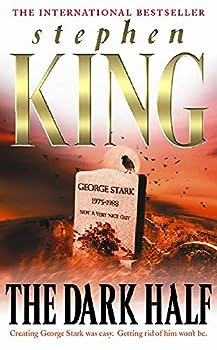 This description may be from another edition of this product. Set in the fictional town of Castle Rock, Maine A "wondrously frightening" ( Publishers Weekly ) tale of terror and #1 national bestseller about a writer's pseudonym that comes alive and destroys...

Published by Horror crazy , 1 year ago
No one can tell a horror story like Stephen King, and he demonstrates why once again with The Dark Half, a haunting, horrific story that will keep you on the edge of your seat throughout! The Dark Half probably felt very personal to King while he was writing it, considering he had already written books under the pen name of Richard Bachman. After all, as any King fan can tell you, this book is about a writer whose pen name takes on a horrifying life of its own, setting in motion a hellish plot to destroy the author and his family, and all because the author finally decided that he no longer wanted to write under that name. The story delivers palpable suspense with every turn of the page after it gets going. And it’s better paced than you might ordinarily expect from a book by Stephen King. No, it’s not some fast-paced roller coaster ride, but the pacing simply seems to suit the story. Thad Beaumont is just as memorable a hero as George Stark is a villain. If you’re looking for a really suspenseful tale of psychological terror with a great supernatural plot, sit down and let Stephen King introduce you to Thad Beaumont’s dark half. WARNING: After you finish the book, you’ll be sleeping with the lights on—ALL of the lights!!!

Simplicity can be bliss

Published by Thriftbooks.com User , 19 years ago
Sometimes, Stephen King can be complicated. Desperation, for example, is quite possibly the best examination of Christian morality that you'll find in popular fiction (or anywhere, for that matter), and Misery manages to construct a fairly accurate, if obvious, allegory of the writer's relationship with his fans. The problem that these novels have, of course, is the fact that the message can, at times, interfere with the story, which (let's admit it, folks) is what a lot of people read Stephen King for.We don't have that problem with this particular book. For once in his long career, Stephen King managed to maintain the authoritarian discipline over his more verbose reflexes to write a story that was JUST a story. He doesn't let himself get sidetracked with backstory, theorization, or philosophy--his first and only focus is to tell the story from beginning to end, and that is just what he does, in masterful fashion. For those of his readers, like myself, who enjoy these literary sidetracks, this can come as a bit of a disappointment (though not much of one), but for people who like to simply dig into their books and forget all that coffee shop, art undergraduate bull [...], this is right up their alley.This presents a bit of a delimma to me, then, since I generally enjoy reflecting on the deeper message and understanding that King is trying to convey in these reviews. There is one here, sort of--while I don't quite agree with George Stade's view (I think that he might just be weaving some of this from some pretty thin thread), there are some statements to be read about the author's relationship with himself, if you're of the mind. The great thing about The Dark Half, however, is that you don't HAVE to go looking for these things.In that sense, I really have to say that this is one of Stephen King's best books, at least in terms of the discipline and focus that he brought to the writing. You can see elements of Richard Bachman in this novel (the style is fairly reminiscent of Thinner, a much poorer effort) alongside King's usual voice and presentation, and the combination works out well in the end.Don't get me wrong--there are knocks to be made against this book. Most of these are of the usual variety for King--the ending is weak, brand names seem to pop up with every odd sentence, etc. Fortunately, the good of this novel far outweighs the bad, in the end. All things considered, I'd say that this is a book that would be good for ANYBODY, dedicated King fan or not, to pick up to simply take an afternoon or two off or pass a long plane ride. While you may not remember it for the rest of your life, it should certainly keep you entertained, and maybe even give you something to think about in the process.

WOW! This book was REALLY twisted but GREAT!

Published by Thriftbooks.com User , 21 years ago
I am 14 years old and in the 8th grade and this is the second Stephen King book I have read. I thought the book "The Dark Half" was excellent! Stephen King has such a creative imagination. I really COULDN'T put the book down. I read the 26 chapter book in 5 days. The Dark Half kept you thinking through out the whole book. I don't think there were any boring parts in the book for me. Everytime you think you figure something out you turn out being even more suprised than before. I honestly have to say that I don't think Stephen King has any "bad" books. I know some may be better than others, but I think this is my favorite one. I enjoyed this book so much, that I would love to continue on reading more of his books. I think this has to be the most TWISTED book I have ever read. The book really freaked me out! I don't won't to go into any details about the book, that's up to the readers to find out what they're missing out on.

Published by Thriftbooks.com User , 21 years ago
This was the first book I read by Stephen King and it's still my favourite. The story is great and belive me when I say I couldn't put it down. It is really an exciting book and there was no boring part for me. I am planing to read it again soon. I would highly reccomend it to all Stephen King's fans.

Published by Thriftbooks.com User , 21 years ago
Quick-paced crime thriller: That's the best description of this magnificent novel. Located of course in Maine, this time in Castle Rock. Both this book, and 'Needful Things' have several characters in common. Unlike another pair of novels, 'The Regulators' and 'Desperation', the characters in question preserve their personality and biographies throughout the novels. Although after finishing 'The Dark Half' you may have an impression that all is well that ends well, read its sibling novel to get to know that this isn't so at all. I have found the 'Half' colorful and enchanting. This novel bound me to itself, so that I felt compelled to finish reading at one shot. Chances are you will too. King often utilizes one writer's trick of emphasizing character's persistent thoughts in separated lines or special type. In 'Carrie' it was for instance "dirtypillows", in 'The Shining' it was "redrum", and here it's "the sparrows are flying again". These mantras remain rooted long after reading the book in question. The writing technique is very convincing, serving as a complement to sequential presentation of words spoken and thought. How many times a day you use one expression in your head's voice and quite another goes out of your mouth? Coming back to the main plot of the book, one can imagine how much pissed off King must have been when his Bachman pseudonym was revealed to the public. On the other hand, the book suggests that he had some bitter thoughts observing the divergence of the volume of sales of his Bachman books and the ones written under his proper name, respectively. Well, all is well that ends well at least in this respect. Years later, in 1995, he exhumed his Bachman pseudo to write a companion novel to 'Desperation'. It was very handy and King used it in a brilliant way, indeed. Hence, reading 'The Dark Half' in 2000, one can look at the bitter writer's experiences with some perspective. As for the book itself, I claim that few writers have King's talent to write books you can't put down, and at the same time be able to amaze the reader with both descriptions and dialogues. Let me use a cliché: we don't read King for blood or any other feature like this. We read him because virtually each book of his carries the stigma of good literature and uniqueness. We read his books because He wrote them, no matter what the book is about. Don't we? So what? Well, LONG LIVE THE KING!
Copyright © 2020 Thriftbooks.com Terms of Use | Privacy Policy | Do Not Sell My Personal Information | Accessibility Statement
ThriftBooks® and the ThriftBooks® logo are registered trademarks of Thrift Books Global, LLC