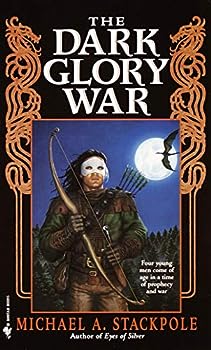 The Dark Glory War (A Prelude to the DragonCrown War Cycle)

New York Times bestselling author Michael A. Stackpole is a recognized star of military fantasy. The Dark Glory War is a thrilling new tale set in a world threatened by an unstoppable foe. . . . In... This description may be from another edition of this product.

The Best Stackpole book (and that is saying something)

Published by Thriftbooks.com User , 17 years ago
The Dark Glory War is the best piece of fantasy that Michael Stackpole has written. From the first page I was engrossed in the story line. Stackpole's first person style lends a different element to his work. The main character (Hawkins) is likeable from the start and you are rooting for him as the story proceeds. Readers be warned...the title is accurate. This book is Dark. If the saga of Hawkins ended with this novel you would be very, very disappointed. Luckily Hawkins' story continues in the DragonCrown War Cycle trilogy. Read them all.

Stackpole at his best

Published by Thriftbooks.com User , 19 years ago
The author certainly wastes no time in getting to the meat of the story. To begin, we meet the three main characters, friends all going through a rite of passage at the same time, one a noble, another the son of a military man, the third a commoner. Their passage to adulthood is interrupted by a monumental event, an invasion from an enemy of old from the north. Having been in the right place at the right time, all three are thrust into an odyssey across their continent. This serves the purpose of introducing the reader both to the varied cultures in this fantasy world, and to the varied races in this world. Among the goodly races are humans, elves of a type to give a refreshing view of them, and a race of shapeshifters. The evil races are headed by an evil sorceress, who controls gibberers, temeryces (feathered, sickle-toed fast running horrors), and giants. The evil has lain dormant for a long time, choosing now to strike, when the populace has grown complacent.Stackpole, as per his usual, deals with the politics of the various regions in regard to one another. Character development is also very well done. The three young men truly become the heroes of their generation. Their journey takes them through many battles, all captured in exquisite detail. While the good guys fare well, there are many extenuating circumstances that conspire to make them pyrrhic victories at best.The story, told by one of the three as a memoir of sorts, ends with extensive setup for the upcoming trilogy, as it is intended. This book has all the elements one might seek from a fantasy novel: action, intrigue, suspense, magic, even romance. Stackpole as much as any other author can create characters that you just truly HATE, and others that you love like your own sibling. If you like fantasy novels and would like something of a change of pace from the tried and true material that is already moldering out there, give this one a try. You won't be sorry.

Published by Thriftbooks.com User , 20 years ago
Tired of Pug saving the universe... again? Do you just want to strangle (insert Wheel of Time character here)?? How many times do Richard and Kahlan have to get beaten/separated/almost raped/ betrayed before Mr. Goodkind realizes he has been writing the same book over and over??? ARGH I CAN'T READ THIS TRASH ANYMORE! I know some of you are nodding you heads' any probably more of you have your fists' in the air yelling "Preach on Brother!" It seems sometimes that the masses aren't reading any good books. Where does that leave us Fantasy Bookworms? Well I will tell you. Waiting for the next book from Martin, Wolfe, or Stackpole. Or in extreme cases like me: visiting Michael Stackpole's website religiously every morning to see if he has posted the first chapter in the sequel to Dark Glory Wars. Now there are plenty of decent fantasy writers out there, and while every once in a while they write something awesome they don't do it as often as Stackpole does. Unlike Fiest, Jordon, Goodkind, and countless other authors he doesn't bleed his series dry. Stackpole is interested in improving himself as a writer and that means that he has to switch gears and write something different. The thing that is great about Dark Glory War (and all of his other books) is Stackpole's ability to really connect the reader to the characters. Each character has a great personality and they fit and contract with each other in a way that seems very real. In fact, I would consider Stackpole's character development to be very close to Martin's ability. Often times while reading DGW I found myself wishing I could jump into the book and beat the stuffing out of some character that was pissing me off, or perchance help out the hero and fix things that have gone wrong. This is what I consider to be good writing. Often times I read fantasy books and I find myself wishing I could beat the stuffing out of the author. So if you like fantasy and you have never heard of Michael Stackpole then you owe it to yourself to buy this book. And if you know about Stackpole and you have only read a couple of his books then make sure you read the rest of them! Which are my favorite of his? Ummm that's a hard question but would probably be a tie between Dark Glory War, Talion: Revenant, and Wolf & Raven. Stop wiping your butt with that Mercedes Lackey book and go buy a novel you won't be embarrassed about!

Much Better than I Expected or Could Hope for!

Published by Thriftbooks.com User , 21 years ago
When I picked up this book at an airport, I must admit to having very limited expectations. I really loved Stackpole's X-Wing books, but I had never read any of his fantasy novels. The beginning of the book was interesting and yet, it took me a little bit of time to get into the flow of the book. Stackpole writes at a fast pace, which means that much of the background and exposition is not immediately discussed or if it is, it is brushed over. Some writers, for example, take eons to advance the plot of the book because they are focusing on describing the fantasy world in which the character lives. Stackpole doesn't give you all the information you need up front; he doles it out as needed. The result is that it took me a while to get a sense for Stackpole's world.Well, I expected this book to be little more than a typical coming of age fantasy story a la the Belgariad or the Wheel of Time series. Although there are similar elements, man was I wrong! Dark Glory War is awesome! Stackpole has crafted a fast paced, exciting adventure book in a style reminescent of Saberhagen's Book of Swords series. Dark Glory centers around three friends, each with their own distinct personalities and battle skills. Without hitting the reader of the head with their differences (Stackpole has a knack for conveying personalities in concise descriptions of clothing, mannerisms, and with very exact and appropriate dialogue), these three young men grow and develop as strong characters literally right before your eyes.Stackpole has created a vibrant society full of endless possibilities. The main characters, Hawkins, Nay, and Leigh, live in a country where certain members of the society wear face masks (hence the cover art). On the night of their "coming out" party, they are suddenly thrust into a series of events which lead them accross borders, into massive land and sea battles, and to one absolutely kickin' ending. For fantasy action fans, if you like R.A. Salvatore, you'll love Stackpole!So, what are you doing still reading this review? Go ahead and buy it! Dark Glory War was one of the most pleasant reading surprises I've had in a very long time.

Renewed my faith in fantasy adventure

Published by Thriftbooks.com User , 21 years ago
This book has brought me back to the fantasy adventure genre. Tiring of the typical Forgotten Realms/Dungeons and Dragons cookie cutter books and not finding anything in the last few years to stir my interest like The Raymond E. Feist Midkemia books, I had all but abandoned the genre that had so intensely awakened my love of reading 24 years ago. With this book, I'm back. Stackpole's use of characters (that seemingly start out hackneyed and trite before developing beyond normal archetypes) against an epic background theme spanning hundreds, maybe even thousands, of years is thoroughly engaging. The villains are refreshing in their makeup and the new races and creatures introduced outstrip those I've found in other fantasy novels, especially the ur 'Zethi race. As I've read in other reviews, some parts of the story were predictable but Stackpole's writing style and prose make them enjoyable. The final, shocking twist completely blindsided me and I'm near to salivating as I wait for the next book in the series to come into print. All Hail Mr. Stackpole, he has produced a truly superior work in a field oft endangered of tired stagnation.
Copyright © 2022 Thriftbooks.com Terms of Use | Privacy Policy | Do Not Sell My Personal Information | Accessibility Statement
ThriftBooks® and the ThriftBooks® logo are registered trademarks of Thrift Books Global, LLC