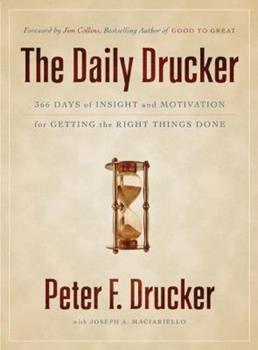 The Daily Drucker: 366 Days of Insight and Motivation for Getting the Right Things Done

Revered management thinker Peter F. Drucker is our trusted guide in this thoughtful, day-by-day companion that offers his penetrating and practical wisdom. Amid the multiple pressures of our daily work lives, The Daily Drucker provides the inspiration and advice to meet the many challenges we face. With his trademark clarity, vision, and humanity, Drucker sets out his ideas on a broad swath of key topics, from time management, to innovation, to outsourcing,...

Published by Thriftbooks.com User , 16 years ago
When Jim Collins (Best seller author of "Good to Great", "Built to Last") mentions that Drucker's words are very like Zen poems, I actually think about Confucius's "Analects" back to 2500 years ago in ancient China. As a Chinese person, I have to read, write, and memorize Confucius's words in the elementary school. However, the wisdom of the Master Teacher is just emerging for me when I enter the tough Internet Age jungle 20 years later. We all know that Drucker is the pathfinder of management field, and he's still kicking and writing as a live God Father today. However, I think the wisdom he discovered for us will be much broader and deeper than our current imagination. In my view, our future generation may benefit from his intellectual journey in the coming 1000 years. We are just in the dawn of Knowledge Economy. As a knowledge worker, Drucker's ideas would be our guiding morning star. And this compact book "The Daily Drucker" make it possible for the fast reading, digestion, and reflection in our hectic times. What a wonderful blessing for us!

Published by Thriftbooks.com User , 16 years ago
It's definitely impossible to summarize teachings of the most original management guru and author of over 35 books in 366 excerpts. However, I think the editor or co-author of the book had done a great job. The "Stream of the Desert" diary format, with a headline/key point at the top, 150-200 words of elaboration in the middle, and an action point at the bottom of each page/day really serves the purpose of providing readers with insight and motivation for getting things done in an effective and efficient manner. In short, an invaluable asset to be placed near any manager's working desk. Below please find some of the sayings I like the most:- - Management always deal with the nature of Man, and with Good and Evil. - Decision makers need to factor into their present decisions the future that has already happened. - Knowledge people must take responsibility for their own development and placement. - It can be said that there are no underdeveloped countries. There are only undermanaged ones. - In an ecology, the whole has to be seen and understood and the parts exist only in contemplation of the whole. - No organization can do better than the people it has. - The challenge to executives is to coordinate efforts of all categories of workers. - Make systematic improvement a priority. - Successful entrepreneurs do not wait until the "the Muse kisses them" and gives them a bright idea; they go to work. - In cost control an ounce of prevention is worth a pound of cure. - Start with what is right rather than what is acceptable. - By far the most common mistake is to treat a generic situation as if it were a series of unique events. - The right answer to the wrong problem is very difficult to fix. - The only things that evolve by themselves in an organization are disorder, friction, malperformance. - The problem is not with technology. It is with mentality. - The executive and the knowledge worker have only one tool - information.

Published by Thriftbooks.com User , 16 years ago
One step at a time... a great way to organize yourself, your life, and your work and see your projects through to accomplishment. A combination of folk wisdom, common sense, and practical advice. Drucker has done it again.

A lifetime of Drucker's writing in a wonderful format

Published by Thriftbooks.com User , 17 years ago
I admit upfront to having been prejudiced in favor of "The Daily Drucker" even before I got this book. Peter Drucker is, to me, the American Business Philosopher--a guru and teacher who writes about the business of business in a fundamental and memorable way. I've been reading his writings for years and I have to say they have shaped my own ideas on business in a profound way. This hardbound book looks rather like a smallish Bible and even has a ribbon to mark your page. It's a book that can fit on anyone's desk (or nightstand) for a quick refreshing read. Best of all, the content is not just random quotes and rehashing of previously published articles. Drucker adds an Action Point to the bottom of each day's reading and italicized points of importance. Here's an example from September 12-- Managing Oneself: Identify Strengths. Drucker advises you to use feedback analysis to really understand your strengths and bolster your weak areas. You write down key decisions and key actions. Nine months later, review the results. After a couple of years of this discipline, you will have a deeper understanding of yourself and how you behave. If you decisions that led to less than optimal results, instead of rationalizing or blaming others, you can adjust your own behavior to improve your outcome. And if you have a particular area in which you shine, you will know it and can take full advantage of your new-found strength. Just reading this makes you wonder; where will you be in three years and how will you have grown if you take up his suggestion of feedback analysis? This type of exercise, and much more in Drucker's book make this a useful book for students of nearly any discipline, for business associates, friends, you name it. Frankly, I like this book as much for its utility as a terrific gift as much I like it sitting on my own desk. I can't imagine who wouldn't benefit from reading it. And it only confirmed my enthusiasm for Dr. Drucker's writing. My recommendation; buy a copy for yourself and a bunch for your friends. It's great.

One Student's Guide to "Getting the Right Things Done"

Published by Thriftbooks.com User , 17 years ago
In the Foreword, Jim Collins recalls a day spent with Peter Drucker in December, 1994. It is important to keep in mind that when he met with Drucker, Collins was only 36 years of age and "with no significant reputation." Nonetheless, Drucker treated him with kindness as well as respect. "His generosity of spirit [then and now] explains much of Drucker's immense influence." Collins reflected on Drucker's admonition to replace the quest for success with the quest for contribution. "The critical question is not `How can I achieve?' but `What can I contribute?'" Before parting, in fact, Drucker told Collins, "I have learned much from our conversation today" and he obviously meant it. Although widely referred to as a "guru," Drucker has always viewed himself as a student. His intellectual curiosity is apparently insatiable. Also his desire to continue to be of service, to add to his contributions as the leading founder of the field of management, as the most influential management thinker in the second half of the twentieth century, and as the founding father of the Peter F. Drucker Graduate School of Management. What we have here is an anthology of 366 brief excerpts from Drucker's 35 books and countless articles. In the Preface, Drucker explains that "the most important part of this book is the blank spaces at the bottom of its pages. They are what the readers will contribute, their actions, decisions and the results of these decisions. [Drucker then adds the following assertion, italicized to indicate the importance he attaches to it.] For this is an action book." He then acknowledges a debt of gratitude to his longtime friend and colleague, professor Joseph A. Maciariello, who assisted with the selection and organization of the material. For example, the items assembled in the January section range from "Integrity in Leadership" to "A Functioning Society." Each of the 31 selections begins with an appropriate quotation, followed by an excerpt and then an ACTION POINT. The same format is employed for each of the other 335 selections throughout the book. Here is a more enlightening example, provided for April 21. Quotation: "If we didn't spend four hours on placing a man and placing him right, we'd spend four hundred hours on cleaning up after our mistake." (Alfred Sloan). The excerpt which follows is taken from Drucker's autobiography, Adventures of a Bystander, and creates a context for Sloan's observation. In this instance, Drucker was astonished by the fact that the senior executives at General Motors spent what he considered "a disproportionate amount of time" discussing the work and assignment of a position "way down the line." As for the ACTION POINT, "Make decisions on people -- selection, placement, and evaluation -- your top priority." The reader is also provided with an extensively annotated Bibliography and a comprehensive list of "Readings by Topic." Re the latter, for example, the subject "New Realities" is discussed in excerpts ass
Copyright © 2020 Thriftbooks.com Terms of Use | Privacy Policy | Do Not Sell My Personal Information | Accessibility Statement
ThriftBooks® and the ThriftBooks® logo are registered trademarks of Thrift Books Global, LLC