(Book #2 in the Robert Langdon Series)

While in Paris on business, Harvard symbologist Robert Langdon receives an urgent late-night phone call: the elderly curator of the Louvre has been murdered inside the museum. Near the body, police have found a baffling cipher. While working to solve the enigmatic riddle, Langdon is stunned to discover it leads to a trail of clues hidden in the works of Da Vinci -- clues visible for all to see -- yet ingeniously disguised by the painter. Langdon joins...

Published by Peyton , 1 year ago
Love It

Published by Bookgamer , 1 year ago
Great book and the movie was pretty right on with the book. I did like Angels and Demons just a little better but they were both great books.

Published by Thriftbooks.com User , 4 years ago
This book is a really entertaining read. Dan Brown keeps his chapters short, and the pace of the story very fast, making you want to read "just one more chapter." I read this book based on the controversy alone, and loved it. it made me want to read more from Dan Brown and to this day he is one of my favorite authors. I won't give anything away, but if you enjoy this book, definitely check out other books by Dan Brown. Any of his other Robert Langdon books are just as good as this one is.

Published by Thriftbooks.com User , 18 years ago
I've never been in Paris. I wasn't a DaVinci's fan and didn't know much about his works & paintings except Mona Lisa. When I picked up Dan Brown's Da Vinci Code to read, I did have a hard time to follow the Da Vinci's works and some sightseeings in Paris described in the book. Thus, I had my computer connected to Internet besides me to dig out different paintings and photos of what the book mentioned like Louvre, Pentacle, The Last Supper, Opus Dei Headquarters, etc. Luckily, The Da Vinci Code Special Illustrated Edition is just out. I couldn't wait and purchased immediately regardless I have the regular hardcover edition of Da Vinci Code, which I plan to give it to one of my friends. This Special Illustrated Edition is not a cartoon or comic edition of Dan Brown's Da Vinci Code, nor it is an abridged version. It's a full original version embedded with over 126 colorful pictures & photos besides the text. It saves you lots of time & effort to search from Internet if you don't know how Château de Villette looks like, the overview map of the Louvre, and many other scenes, buildings, paintings mentioned in Dan Brown's Da Vinci Code. Overall, it's LOVELY! Undoubtfully Dan Brown has done amazing jobs to his book "The Da Vinci Code". The story is powerful and magnificent. Mixing with a lot of traceable truth and facts, he made his novel sound extremely convincing and inevitably deluded you from what's real and what's fictional. However, please don't take it too serious, it's just a novel, not a research paper trying to make a breakthrough statement. Overall, the book has quite a lot of twists shocking you. Even the ending has double meanings. Make sure you read the Epilogue chapter, or you won't know where the Holy Grail rests that Dan Brown suggested as the poem below: "The Holy Grail 'neath ancient Roslin waits. The blade and chalice guarding o'er Her gates. Adorned in masters' loving art, She lies. She rests at last beneath the starry skies." For people who love deciphering codes, Dan Brown wisely placed some codings on the regular hardcover edition's paper cover. If you pay attention you may find some bold fonts seemed appearing randomly. Link them up and you should see a hint to read. (Reviewed by Otto Yuen, 21-Nov-2004)

Published by Thriftbooks.com User , 19 years ago
Seldom in popular fiction do you find such intelligent writing as that produced by Dan Brown. In addition to the superbly crafted mystery that we are privileged to enjoy it is as though you have attended a seminar on in this case art and religious iconology. As Brown states at the start of his book, "All descriptions of artwork, architecture, documents and secret rituals in this novel are accurate. When I am reading a book by Dan Brown I never feel that I am wasting my time. You might ask if all this information bogs down the story and the answer is a resounding "NO". Brown has the ability to take dry facts and present them in a fascinating way. He also brilliantly weaves together many diverse threads into a coherent and intriguing plot.We first met Professor Robert Langdon in Brown's previous thriller 'Angels And. Demons'. This book continues our acquaintance with the compulsive and brilliant Langdon and introduces the equally clever Sophie Neveu. She is the estranged granddaughter of the curator of the Louvre, who is the victim of a savage murder. As he lays dying he leaves a cryptic message for his granddaughter and Langdon to decipher. Thrown together by the events that have occurred they must combine their considerable skills to solve the complex mystery before it is too late.This book is a must read for mystery buffs and anyone who enjoys intelligent literature!

The Da Vinci Code Mentions in Our Blog 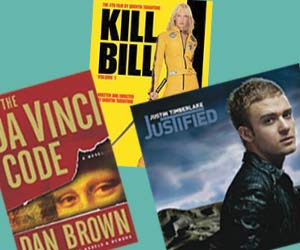 The Great American Read on PBS
Published by Beth Clark • August 03, 2018
The Great American Read is a PBS series that explores and celebrates the power of reading as the core of an ambitious digital, educational, and community outreach campaign designed to get the country reading and passionately talking about books. One hundred books, to be exact, so as promised, here are the next 20!
Read Article
Trustpilot
Copyright © 2022 Thriftbooks.com Terms of Use | Privacy Policy | Do Not Sell or Share My Personal Information | Accessibility Statement
ThriftBooks® and the ThriftBooks® logo are registered trademarks of Thrift Books Global, LLC