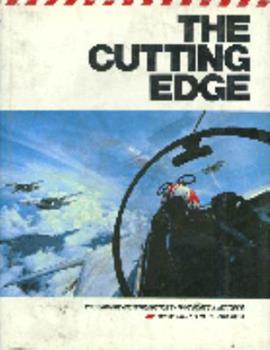 When Navy fighter pilot C.J. "Heater" Heatley III took his camera into the cockpit of an F-14 and onto the deck of a carrier, he wanted to convey the unique sights and sensations that pilots... This description may be from another edition of this product.

From a Navy Pilot

Published by Thriftbooks.com User , 15 years ago
I was 13 when I first purchased Heater's book. At 14 I called him on the phone to ask him how to to become a Navy pilot. He realized I was a star-struck kid and was polite and encouraging. Now, 17 years later, I've been a Navy pilot for almost 10 years. I often think back to the days that I dreamed of flying and I have to say that "The Cutting Edge" was one of the biggest influences and motivations from my childhood. It was his photographs and the world that they depicted that gave me the motivation and pushed me forward through college and flight school and ultimately to earn my wings of gold. I lent my copy of the book to a friend 14 years ago (who is now an F-16 pilot), and I never got it back. So, I decided to buy another copy to show my wife (and hopefully someday my kids). I want to show my family what this book has meant to me throughout my life, and how you really can make your dreams come true if you take an image from a book, or whatever, and decide to make it come true. C.J., if you ever check this site, I just want to say Thank You. You helped me make my dreams come true and I can never fully express to you what that has meant to me. I'm finally in those skies you captured years ago. Thank You.

Epic pictorial of naval aviation circa 1987

Published by Thriftbooks.com User , 18 years ago
This is an epic pictorial of the US Navy of the 1980's. "Edge" came out in the 1980's, in the wake of the popularity over "Top Gun", though it does less to cash in on the hype than generate its own. (Remember how in 1986, leather aviator jackets covered in patches like some old steamer trunk were all the rage?) With George Hall's "Top Gun", "Edge" occupied a spot on my bookshelf, but never sat unread very long. Heatley's camera picks up life aboard an aircraft carrier - mostly on deck. Though an F-14 pilot, Heatley also captures the adventures of those who fly "Helos", Hawkeye radar planes, Viking sub-hunters, Corsair strike fighters, Intruder bombers, tankers, and ELInt planes. "Edge" is mostly a picture book - with little emphasis on telling very detailed stories. Nevertheless, between thin blurbs from shipmates and Heatley's pictures, a very nuanced picture of carrier aviation comes across - F-14's going supersonic or dogfighting against each other; Sea-Knight helicopters bringing needed supplies; deck-crew managing millions of dollars worth of hardware on a pitching carrier deck; a mammoth warship is dwarfed by the vast seas in a great vista shot; stricken planes making emergency barricade landings; Soviet planes being intercepted near the carrier. (I doubt that the Tu-95 "Bear" has ever appeared so classically beautiful by Soviet photogs.) Mid-way through, Heatley goes to Miramar to capture the sights of legendary Top-Gun (since moved to Yuma) and also capture the (then) new F/A-18 which was just entering the fleet. Heatley gets some great shots of aggressor pilots and their planes - McDonnel Skyhawks and Northrop Tigers with Soviet-style paint jobs - but the results aren't as dramatic as those achieved on the carrier (maybe the rigors of naval aviation have a way of creating their own narrative.) Heatley's pictures are incredible - it's hard to believe that they're being taken while the guy is driving a $36 million plane (one of his shots appears as a mural in the bar scene in "Top Gun".) While the pictures are unforgettable, "Edge" excels in the uncommon and still unsurpassed sincerity that Heatley brings out of his crewmates. They're faithful to their roles as strike-fighter aviators or helo drivers, but aren't afraid to talk about their limits (we know that the Corsair doesn't come with the bells and whistles of an F-14, but its pilots appreciate being able to make all the decisions themselves; sub hunting isn't a fast-moving job, but Viking crewmen appreciate the thrill of the chase). If you want a more detailed story of Navy carrier aviation, I'd recommend George Hall's book - which has some great pictures to be sure, but nothing that can touch the visual splendor of "The Cutting Edge".

Published by Thriftbooks.com User , 23 years ago
As a long time airdale/sailor this is the only book of it the kind. This is a must have book for the ex-Navy flight deck 24 hours/7 days a week action packed photo album! The photo's are superb! Most photo's are action photo's and not a bunch of birds sitting on the deck of the boat! As a jet mech (AD2), I've been there done that! This is a close to the real thing as your going to get, plus you get to see the Navy in her prime with a A-3, A-6, A-7 and of course the cat's! Buy this book and you'll enjoy it for life. I guarrantee it!!! AD2 Pols

Published by Thriftbooks.com User , 23 years ago
C.J. Heatley takes you into the cockpit to show you what it's like to fly an jet fighter off a carrier deck. Most of the pictures show an insight that few civilian photogs get the chance to see; Navy aircraft in their operating environment out at sea. An excellent addition to the library of any aircraft afficionado.

Published by Thriftbooks.com User , 26 years ago
The best pictorial of high performance aircraft in action ever produced. Not the usual press corps pictures of aircraft in formation. The author spent years in service and flew with cameras on every mission. His still pictures capture an amazing amount of energy and motion. My two favorite pictures: 1) A rainbow ring around an F-14 as it breaks the sound barrier in a tropical environment--shot from the author's plane while doing the same; 2) an F-14 at the moment of touchdown on a carrier with a hint of tire smoke and the arresting cable whipping taught. WOW!
Copyright © 2022 Thriftbooks.com Terms of Use | Privacy Policy | Do Not Sell My Personal Information | Accessibility Statement
ThriftBooks® and the ThriftBooks® logo are registered trademarks of Thrift Books Global, LLC