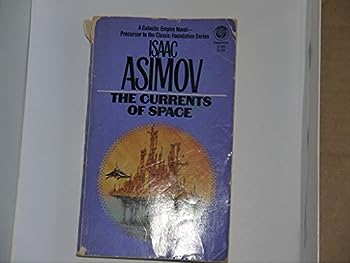 The Currents of Space

This description may be from another edition of this product. The second book in the Galactic Empire series, the spectacular precursor to the classic Foundation series, by one of history's most influential writers of science fiction, Isaac Asimov Trantor had...

Published by Thriftbooks.com User , 19 years ago
I just finished this book a couple nights ago. I've also read all four Robot novels and the first Empire book Stars Like Dust. I have to say that out of those books, The Currents of Space drew me in the most and really delivered!The Trantorian Empire is rapidly approaching its full conquest of the galaxy. However, the wealthy planet Sark is one of the relatively few major obstacles remaining to the Trantorians in their mission. Sark is independent and important to the galaxy for its sale of the extremely valuable substance known as kyrt. Kyrt is similar in some ways to cotton but vastly superior in other respects, and it's only available from Sark.However, Sark doesn't produce the kyrt itself. For some unknown reason, kyrt grows *only* on the nearby planet of Florina. Sark basically uses the Florinian natives as cheap slave labor to harvest and process the kyrt. No one has been able to get kyrt to grow elsewhere as anything but plain cotton. Thus, Sark has become wealthy and powerful. In addition, though Trantor could easily subdue Sark militarily, it would face the wrath of the rest of the galaxy for disrupting the supply of kyrt. Naturally, Sark depends entirely on its exploitation of Florina for its wealth.Now enter a man who knows that Florina is doomed and that the immensely important kyrt production may be in jeopardy. This leads to a fantastic tale of political intrigue, murder, and sci-fi that somehow seems to have a lot more substance than the 200 pages it takes up. Read it!If you can get it, that is. All three Empire novels are out of print. I suggest trying online auctions or used book stores.

In any setting but sci-fi, this would be Wouk via Ludlum

Published by Thriftbooks.com User , 21 years ago
One day, on an agricultural colony planet run by a empire as harsh as the Roman Empire in biblical times, a local functionary finds a man whose mind has been destroyed in one of his town's fields. A peasant woman is tasked to re-raise this man from pretty much a second infancy. But now things are starting to come back, and the supervisor, although a native himself, sees the threat this poses to his masters' power. The principal crop on this world is a form of cotton that grows only this way on his planet--it's used in expensive clothing. But before his mind was "wiped", the victim was a scientist who had discovered a menace which threatened that planet. Although the story has Ludlumesque head games by people in power, its strong point is in the human factor in the form of the victim, his female protector, as well as his former boss who's concerned about what became of him. That's why I say Wouk. But this is a sci fi book, right? Well, don't let that scare you off. It's a hell of a story in a middlin' size book--you don't get the two in a single package all that often.

Space Opera at its best

Published by Thriftbooks.com User , 21 years ago
It is really an enormous tragedy that so many of Isaac Asimov's greatest Science Fiction works remain out of print. The three `Empire' novels by Asimov are a great example. All three books are wonderfully written and fill the gap between The Robot novels and the Foundation series beautifully. These novels are also a glimpse at the state of science in the fifties. If you are an Asimov fan and see any of the Empire novels available for loan or purchase please do so. You will not be sorry. To clear up some confusion on the part of some, the reason these novels are called `Empire' novels is because they take place just before the Empire began, during its infancy and at its peak. Very much fun indeed.

Definitely one of Asimov's best

Published by Thriftbooks.com User , 22 years ago
This is certainly the best of the three Empire novels, and one of Asimov's best science fiction novels of any type. I love his early fiction in general more than his later stuff, like FOundation and Earth and Robots and Empire and Nemesis. In comparison, Currents is much tighter, and more cleanly written, with a plot that GRIPS you like a good mystery(which, I think, is the type of writer Asimov was at heart). My one regret about this novel is that it is one of the last of his that I have to read, and I don't want to be left without any more. And if there was one thing I was left wanting in the book, it was for a certain kiss(not to give away anything) to develop into something more-- but I suppose that is the working of modern hack-fiction on me, and Asimov's abstinence from such cheap "attention-catchers" demonstrates his superior writing ability. He didn't NEED that to make the book more interesting.