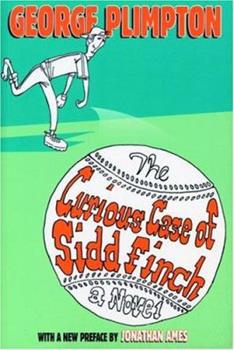 The Curious Case of Sidd Finch: A Novel

In April 1985, Sports Illustrated published an article that stunned the sports community. George Plimpton's 13-page profile of Sidd Finch, a mysterious pitcher who had been signed by the New York Mets and reportedly threw 168 mph, came complete with photos from spring training, scouting reports, and interviews with Mets players and management. A week later, SI apologized to readers around the world for their role in what is generally regarded as the...

Published by Thriftbooks.com User , 15 years ago
Plimpton has teased out an April Fool's Sports Illustrated article on a monk turned superhuman baseball pitcher into a fun full-length novel. You don't have to be a baseball fan to appreciate the curious mix of the New York Mets eager management and the shy unlikely pitching phenom, Sidd Finch. The story revolves around a deadbeat ex-writer with writer's block who befriends Finch and his carefree college-dropout girlfriend. The book is filled with uniquely Plimptonian anecdotes and characters as it follows Finch through spring training and his Shea Stadium debut with the New York Mets. Although very fun and a page-turner, you can feel that it is Plimpton's first novel. It suffers from pacing problems and I was a bit disappointed by the quick, sharp ending.

Not your usual Plimpton Plays with the Pros book

Published by Thriftbooks.com User , 19 years ago
If you didn't know George Plimpton and you read the book jacket blurbs, you might wonder just who this Sidd Finch really was. You might even remember that Sports Illustrated featured Finch in 1985, and you may not have noticed that it was their April (Fool) issue.Plimpton weaves a whimsical tale of a young man who, by happenstance, spent enough time in a Himalayan monastery to learn how to throw a baseball 168 miles an hour (didn't know monasteries taught such things, did you?) He's unerringly accurate, to boot! Starting with a seemingly innocent invitation to a burned-out journalist (Plimpton?) to enjoy a Goodyear blimp ride in Florida, the tale unfolds as baseball moguls try to inveigle Finch into signing on with the Mets. Finch, of course, is anything but your average kid from the Babe Ruth league. Finch finally signs, and with 81 strikes puts away the St. Louis Cardinals. Sensation reigns in the baseball world.Does he go on to finish the season without giving up so much as a foul tip? Finch has many a surprise in store for friend and foe alike.Sprinkled with Plimptonesque asides on a wide variety of subjects like Vietnam, the Mafia, sports management, and writers (he even describes himself at one point), this is a pleasant literary/sports romp. It's short enough to read in one evening and enjoyable enough to remain with you a lot longer.

Published by Thriftbooks.com User , 20 years ago
The book that I read was The Curious Case of Sidd Finch by George Plimpton. Out of a five star scale I gave it a 4. It is a funny book because it is fiction, so Plimpton can do a lot with the characters, mainly Sidd Finch. Hayden (Sidd) Finch is the main character in this book. He is this kid who has never played baseball before but has unbelievable skills. He can throw the ball 170 miles per hour with unbelievable accuracy. The New York Mets a professional baseball team would like him to play for their team. The book is mainly about Sidd finch's efforts and trying to play for the New York Mets baseball team. I liked this book because I am a big sports fan and I like reading about sports. I also like humor and this book also has that. Its funny reading about someone who can pitch that fast because it will never happen. So that's where your imagination can come into play. Its fun reading books that force your imagination to come forward and do something. It makes you, which therefore means that you are getting something out the reading.
Copyright © 2020 Thriftbooks.com Terms of Use | Privacy Policy | Do Not Sell My Personal Information | Accessibility Statement
ThriftBooks® and the ThriftBooks® logo are registered trademarks of Thrift Books Global, LLC