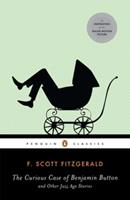 The Curious Case of Benjamin Button and Other Jazz Age Stories

An original collection of Fitzgerald's greatest stories from the 'Roaring Twenties' In the title story-the inspiration for the major motion picture The Curious Case of Benjamin Button, starring Brad Pitt and Cate Blanchett-a baby born in the 1860 begins life as an old man and proceeds to age backward. F. Scott Fitzgerald hinted at this kind of inversion when he called his era 'a generation grown up to find all Gods dead, all wars fought, all faiths...

Published by Thriftbooks.com User , 12 years ago
Most critics have often thought of Fitzgerald's short stories as what he did for money between writing novels and haven't had a high opinion of their worth. Many are, indeed, a poor man's version of O'Henry stories with "twist" endings. About a quarter of the stories here, though, are pure genius with such tales as "the Ice Palace" and "Benjamin Button." If you are a fan of the recent movie, or of Fitzgerald, it is a worthwhile purchase.

Published by Thriftbooks.com User , 12 years ago
Enjoying this book so far, I forgot how much I used to enjoy Fitzgerald's stories, it has been a long time since I read him. But I really brought the book to read Benjamin Button, I loved the movie but it was a real stretch from the short story.

Published by Thriftbooks.com User , 12 years ago
F. Scott Fitzgerald (1896-1940) is best known as the premier chronicler of the Jazz Age in such novels as "The Far Side of Paradise"; "The Beautiful and Damned". "The Great Gatsby" and "Tender is the Night." However he was also a short story author churning out stories for popular periodicals of the day such as The Saturday Evening Post, Colliers and The Scribner House magazine. Penguin has taken two of his short story collections "Flappers and Philosophers" and Tales of the Jazz Age" combining them in a fat Penguin Classics edition. The stories are those the Princeton man wrote at college and in his early career. The Peguin edition includes The Penguin edition has "Benjamin Button" on the cover in order to cash in on the popularity of the film starring Cate Blanchett and Brad Pitt. The Curious Case of Benjamin Button occurs in Baltimore where a child is born who is an old man. The fantasy follows his career as he becomes progressively younger. If you can accept the absurdity of the premise you can relax and enjoy a story well written and witty. The stories are uneven in quality and interest. Among the best ones in this collection are: The Diamond Big as the Ritz-A wild fantasy set in the American West in which the hero visits a school chum who owns a mountain made of solid diamonds who is cruel and keeps prisoners of those unwary to explore into his vast territory. Bernice Bobs Her Hair is a short O Henry type tale in which Bernice has her hair cut and gets back at a relative who has criticized her appearance. The Ice Palace is the story of a southern belle with a northern boyfriend. She experiences hatred for the northern way of life symoblized by her being momentarily lost in a huge ice palace built for a winter festival. She bears a resemblance to Scott's Alabama born wife Zelda Sayre Fitzgerald. The other stories are also worth reading. One does wince when Fitzgerald uses racially insenstive words regarding African-Americans and Jewish persons. In all there are nineteen stories by one of America's greatest authors.

Published by Thriftbooks.com User , 12 years ago
I read this story before seeing the movie starring Brad Pitt. The story is great and worth reading. It is only 20+ pages, but really interesting. I saw the movie yesterday, and highly recommend the movie. The movie has taken some liberties from the book, but still excellent. Movies are always a little different from the book. I recommend you read this story before seeing the movie. I gave the book to my 19 year old son to read, and he enjoyed it too. We went to the movie together, and both enjoyed the movie. It was a nice mother/son date. I am an avid reader, but my son normally only reads for school or Harry Potter books, so it was nice that he enjoyed this story too, and wanted to see the movie with his mother. Pick up the book and share it with your family, you might be surprised how much they enjoy reading it too.
Copyright © 2020 Thriftbooks.com Terms of Use | Privacy Policy | Do Not Sell My Personal Information | Accessibility Statement
ThriftBooks® and the ThriftBooks® logo are registered trademarks of Thrift Books Global, LLC