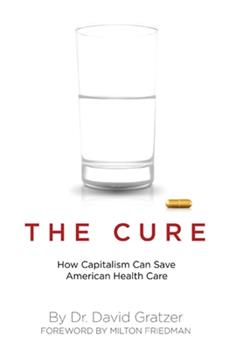 The Cure: How Capitalism Can Save American Health Care

Drawing on personal experience in both the Canadian and U.S. systems, Dr. Gratzer shows how paternalistic government involvement in the health care system has multiplied inefficiencies, discouraged innovation, and punished patients. The Cure offers a detailed and practical approach to putting individuals back in charge. With an introduction by Milton Friedman, The Cure will be required reading for anyone who wants to know what is really wrong with...

Published by Thriftbooks.com User , 14 years ago
If only politicians would give the ideas in this book a chance. As the author skillfully argues, American health care is very good, but the American health care system as it currently exists is a huge mess. The good news is that the author doesn't just point out the problem. He explains why there is a mess and then gives prescriptions to make things better. The author is an MD with experience practicing in Canada and the U.S. so is able to speak to both the socialized (single-payer) system and the U.S. health insurance based system. The author's thesis is that the U.S. health care system is in such shambles because of the way the system is designed. The current system prevents the free market to function like any other sector of the economy. The solution is more choice, more competition, and fewer regulations. One of the key problems is the way health care is paid for--it is treated less as insurance and more as pre-paid healthcare. For example, you don't insure your car for routine maintenance but mainly for high cost and catastrophic accidents. For routine maintenance, you pay out of pocket based on a consideration of price and quality of an auto repair shop. The same should apply to health care. The author argues persuasively that a routine visit to a doctor should be paid for by the patient, whereas an operation would be paid for by a high-deductible insurance policy. The patient would be able to pay for routine visits through their own health savings accounts. A shift to this paradigm will bring down costs for everyone and make health care more affordable. The author also provides solutions to the problems and rising costs with Medicare and Medicaid which are both going broke. He offers solid solutions there, but it's hard to see the politicians going for them. For those that want to educate themselves on how to fix the health care system, this is a must read.

Excellent book that gets the heart of the health care problem...and how Govt. is NOT the answer!

Published by Thriftbooks.com User , 14 years ago
Don't listen the "Ridiculous Bias!" review -- that review has far more 'bias' than the good research in this book. Judge the content on its own merit. Excellent book that is highly recommended if you want someone to explain to you exactly why government CANNOT possibly offer the quality health care already afforded in the free market.

Because Everyone Seems to Need The Cure

Published by Thriftbooks.com User , 14 years ago
The Cure: How Capitalism Can Save American Health Care is an excellent resource on health care economics and the history of health care policy. The author is a free market economist, a physician and a senior fellow at the Manhattan Institute. The research that went into this book has been endorsed by Milton Friedman (in the Foreword) so it should be of appeal to free market advocates. Dr. Gratzer persuasively argues that the fundamental problem with U.S. health care is too much government regulation. To argue this, Dr. Gratzer first notes how the employer-based health coverage arose as an unintended side effect of a tax law, which allowed employers to write off health care expenditures for their employees. Moreover, Dr. Gratzer argues that both Democrats and Republicans have both essentially offered more government regulation as the solution to health care, which has not worked. The Democrats, such as the LBJ Administration, promoted enormously inefficient programs such as Medicare and Medicaid. The Republicans, have promoted bureaucratic HMOs, which have led to similar large-scale inefficiencies. Driving this point further, Dr. Gratzer greatly details the harmful economic consequences of government regulations in health care. For example, the Emergency Medical Treatment and Active Labor Act (EMTALA) forbids hospitals from denying any patient for emergency care. The economic reality is that this leads to hospitals suffering economic losses by being forced to treat patients, regardless of if they can pay for the care, which ultimately leads to the closing of hospitals. Furthermore, insurance mandates, such as benefit mandates, rating mandates and bans on out-of-state insurance, restrict competition and lead to higher insurance premiums. Dr. Gratzer also thoroughly analyzes the harmful economic consequences of the FDA, Medicare, Medicaid and much more. This book also dispels many common myths about the quality of U.S. health care. For example, statistics are often cited to argue that Canadians and/or Europeans have higher life expectancies than U.S. citizens. Dr. Gratzer argues that such studies mistakenly compare statistics on *health* when they should be on *health care*. There numerous lifestyle habits that differ between cultures, such as frequency of exercise and diet, which effect health. Dr. Gratzer proposes examining statistics on cardiac arrest patients, to see which country offers better treatment. In these respects, Dr. Gratzer argues that the U.S. system is clearly superior to its universal health care counterparts. As one can infer, Dr. Gratzer proposes free market solutions to fix American health care. Specifically, he proposes drastically reducing the various regulatory excesses that he delineates throughout his book as well as embracing Health Savings Accounts. As always, Dr. Gratzer corroborates his arguments with real-world success stories, such as the success of Whole Foods' adoption of HSAs for its employees. I highly recom

Published by Thriftbooks.com User , 15 years ago
Let me state now that NO ONE is denying that healthcare in the United States is messed up right now, and is facing some SERIOUS issues. Even the most conservative Republican knows this full well and good. This is not even the issue. The real issue should be: would socializing things make our problems better or worse? Michael Moore, in Sicko, touts Canada's socialized healthcare system, even calling it "free." (It's not free. The government also does not "pay" for it because the government does NOT have any money. Taxpayers pay for it.) Moore is of course conveniently ignoring many well-known facts. The author of Cure was a Doctor in Canada, and saw first-hand the problem with socialized medicine. His book demonstrates that it's not all that it's cracked up to be. Sorry Hillary. In England and Canada, if you go to the doctor or the hospital, you won't get a bill. Yeah that's great. But the problem that has emerged is that it takes SO LONG to even get in for certain types of treatment that people are DYING OF EASILY TREATABLE ILLNESSES THERE. In England this has gotten SO BAD that more people are dying a year of treatable cancer than from automobile accidents!!! Yes, that's right. The cancer WAS treatable, but by the time they actually get in for treatment, it has advanced to the stage that it no longer is treatable, and the patient dies. So, if the healthcare in Canada is SO WONDERFUL, then why are so many Canadians flooding our Northern hospitals every year? They come across the border for an appointment they can get right away, when in their own country they would have to wait nine months to a year for treatment. As shown on 20/20, dogs and cats that need surgery in Canada get it faster than humans! By the way, if you get strep throat and have to wait a month to even get in to see a general practitioner (which is about the typical wait for GPs in Canada), then what's even the point? You'll be better by the time you get in! So, depending on whether what you have is life-threatening or not, YOU'LL MAY EITHER BE BETTER OR UNCURABLE BY THE TIME YOU EVEN SEE A DOCTOR! Who cares if it's "free"? As the Canadian woman on the September 14th episode of 20/20 said who had to come to America for a life-saving surgery that the Canadian system classified as "elective surgery" (whereas the American doctor gave her only a couple weeks to live), "Who cares if they make a profit (in America), I'm alive!" The wait to see dentists in England is so bad that people are now performing home dentistry. We're not talking teeth cleaning here, but people pulling their own teeth out instead of having professional work done! Lines to get into the dentist in England look like the lines did at the local theater on the opening night of Star Wars Episode III. No thank you! By the way, if the government-run medical system in Canada is so great, then why does a private clinic now open in Canada EVERY WEEK, on average, even though such clinics ARE ILLEGAL? Furthermore,

Published by Thriftbooks.com User , 15 years ago
In Canada, dogs can get a hip replacement in under a week. Humans can wait two to three years. By DAVID GRATZER Wall Street Journal Online, June 28, 2007; Page A13 'I haven't seen 'Sicko,'" says Avril Allen about the new Michael Moore documentary, which advocates socialized medicine for the United States. The film, which has been widely viewed on the Internet, and which will officially open in the U.S. and Canada on Friday, has been getting rave reviews. But Ms. Allen, a lawyer, has no plans to watch it. She's just too busy preparing to file suit against Ontario's provincial government about its health-care system next month. Her client, Lindsay McCreith, would have had to wait for four months just to get an MRI, and then months more to see a neurologist for his malignant brain tumor. Instead, frustrated and ill, the retired auto-body shop owner traveled to Buffalo, N.Y., for a lifesaving surgery. Now he's suing for the right to opt out of Canada's government-run health care, which he considers dangerous. Ms. Allen figures the lawsuit has a fighting chance: In 2005, the Supreme Court of Canada ruled that "access to wait lists is not access to health care," striking down key Quebec laws that prohibited private medicine and private health insurance. ... Other European countries follow this same path. In Sweden, after the latest privatizations, the government will contract out some 80% of Stockholm's primary care and 40% of total health services, including Stockholm's largest hospital. Beginning before the election of the new conservative chancellor, Germany enhanced insurance competition and turned state enterprises over to the private sector (including the majority of public hospitals). Even in Slovakia, a former Marxist country, privatizations are actively debated. Under the weight of demographic shifts and strained by the limits of command-and-control economics, government-run health systems have turned out to be less than utopian. The stories are the same: dirty hospitals, poor standards and difficulty accessing modern drugs and tests. Admittedly, the recent market reforms are gradual and controversial. But facts are facts, the reforms are real, and they represent a major trend in health care. What does Mr. Moore's documentary say about that? Nothing. Dr. Gratzer, a practicing physician licensed in Canada and the U.S. and a senior fellow at the Manhattan Institute, is the author of "The Cure: How Capitalism Can Save American Health Care" (Encounter, 2006).
Trustpilot
Copyright © 2022 Thriftbooks.com Terms of Use | Privacy Policy | Do Not Sell My Personal Information | Cookie Preferences | Accessibility Statement
ThriftBooks® and the ThriftBooks® logo are registered trademarks of Thrift Books Global, LLC