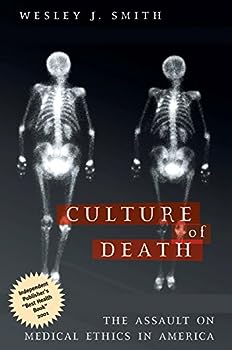 Culture of Death: The Assault on Medical Ethics in America

This description may be from another edition of this product. When his teenaged son Christopher, brain-damaged in an auto accident, developed a 106-degree fever following weeks of unconsciousness, John Campbell asked the attending physician for help. The doctor...

A Revealing and Compassionate Critique of the Euthanasia Movement

Published by Thriftbooks.com User , 15 years ago
Bioethicist Wesley J. Smith takes aim at the arguments permeating our culture that devalue human life. Smith makes readers aware of the historic roots of the modern euthanasia movement, which today repeats arguments made by Nazis and proponents of eugenics tied back to 19th century social Darwinism. Smith is extremely sensitive to the plight of the suffering and the dying. One of Smith's primary points is that while death comes to us all, those suffering through terminal diseases can make use of painkillers to ease their difficulties: "Assisted suicide advocates often try to create a false moral equivalency between medically controlling pain and so-called mercy killing. The argument goes something like this: since some people's deaths are hastened by the powerful medications required for effective palliation, and since pain control is unquestionably moral and ethical, then assisted suicide should also be viewed as proper because the intent of assisted suicide is to alleviate suffering. There are two problems with this argument: medical studies demonstrate that properly applied pain control usually does not shorten life; and, the argument completely misapplies what is called `the principle of moral effect.'"Smith goes on to explain that there is a gulf of moral difference between taking painkillers, which is taken for the intent of relieving suffering and not to end life, and assisted suicide, which occurs under the intent to intentionally cause death as a means of alleviating suffering. The book also reminds of the past evils connected to cultures which did not value life. The Nazi rulers of Germany called the old, weak, sick, or handicapped "useless eaters." Forced sterilization was one of the first moves of Nazi Germany, where social Darwinism ran deep in their political blood. Yet the eugenics movement itself traces closely to Darwin. Darwin's cousin Francis Galton coined the term "eugenics" ("good in birth") to advocate that humans engage in selective breeding. Early 20th century eugenics organizations offered prizes to upper class families which could have the most children. Others, such as Carrie Buck, weren't so lucky and had to undergo forced sterilization in our country between 1907 and 1960. Smith warns that future troubles could be tied to the fact that only 14% of doctors today report having taken the Hippocratic oath to "do no harm." Smith even recounts episodes of doctors recommending that the old or sick be denied basic treatments which might potentially save life. This enlightening book unmasks unexpected occurrences in the present practice of medicine, and shines light into a future that many of us might not like.

Published by Thriftbooks.com User , 20 years ago
A co-worker loaned me this book. I started to read it with some misgivings thinking that it would challenge some of my own beliefs. It did to some extent. However, I found myself agreeing with the author far more often than disagreeing. The author appears to anchor his beliefs on basic religious--or humanistic if you prefer--ethics concerning the absolute moral value and equality of all human life. Christian ethics, Buddhist ethics, etc.--I believe would all be in fundamental agreement upon this absolute moral value and equality of human life.From this position the author argues against certain medical technocratic bioethics thinkers, HMO management in some cases, PETA and other animal rights groups' spokesmen, etc. He makes his case effectively. Our modern culture tends to devalue and discard that which is less than "perfect", i.e., whatever is old, disabled, plain, or just simply discomforting. Many of us seem to want to live in a world with no "edges" or anything or anybody that would upset us. Aldous Huxley's "Brave New World" is a work that the author commonly refers to as an example of fiction turning into reality. He makes the very strong point that we are in grave danger of losing our ability to be compassionate, caring, empathetic, and so forth by embracing the medically utilitarian view of quick disposal of that which is terminal. I am sure that the author overstates at times, however, I have more than once run into the coldly clinical, elitist, dispassionate MD on a personal level. I believe that western medicine produces more than a few of these folks. They and their kin should not have the final say in how the physically and mentally disabled, the elderly, and the dying are to be "disposed of". I noticed that the other reviewers appeared to politically conservative. I am not of that persuasion. However my views on abortion and animal rights--like the author's--probably could best be described as "moderate" or seeking compromise. The boogie man in this tale is utilitarian functionalism which can be seen as a product of medical elitism, western modernism, and a lack of caring on the part of society and individuals. The cure, as the author suggests, is a return to values of love and compassion on the part of society. I'm not for sure if those values of love and compassion have ever been that terribly engrained in our culture, but they are very worthy values to strive for. And the author has done a very good job of doing so. Hopefully, this debate will not degenerate into some moronic discourse between "conservatism" and "liberalism". Imagine yourself, old, infirm, in great pain, and slowly dying. How would you like your last days to be lived out? You would undoubtedly want love, compassion, and understanding from those around you. The human, non-ideological solution.I would take issue with the author over the issue of terrible pain during the time of dying. Better palliation and pain relief are wonderful solution

Published by Thriftbooks.com User , 20 years ago
The ominous term "Culture of Death," coined by Pope John Paul II encompasses a variety of current trends-the glorification of violence in movies and music, abortion, infanticide, euthanasia, the escalating use of sweat shop labor, and a host of other degradations that debase humanity. Wesley J. Smith wisely limits his focus to an exploration of the innocuously titled bioethics movement, and what he finds is very scary! Bioethics has many deleterious similarities with another increasingly popular craze--multiculturalism. Both fads seek to diminish the value of the individual for the good of the "group," both seek to revolutionize basic aspects of society and castigate all those who advocate a different perspective, and both have snowballed in acceptance without any genuine proof of their beneficence. One pernicious difference can be seen in the end result of their adoptions. While multiculturalism presents great potential harm by devaluing persons and encouraging stereotypical group identities, Bioethics dictates that some lives are more valuable than others and some are not worth saving or even palliating. Bioethics has already made a host of insidious advances from the enforced withdrawal of feeding tubes-sometimes against patient's wishes-to the feasibility of "assisted suicide" to experimentation on severely disabled babies (an activity straight out of Dachau) to everyday occurrences like stem cell research and far-flung abortion. One of the areas were bioethics has scored impressive success is the animal rights movement which openly promulgates the notion that some animals are more important than some people. Obviously those of us who are proud animal-lovers would never tolerate any form of mistreatment of our furry friends, and when medical animal experimentation is absolutely necessary, we are right to demand that the creatures be treated humanely. Still the thought that a severely disabled newborn baby deserves less care than any animal or any other human being for that matter (a prospect vehemently purported by Princeton University's resident madman Peter Singer and a gaggle of other animal rights extremists) would be farcically amusing were it not gaining such horrifying acceptance.Adding to the disquieting nature of bioethics is a recurrent racist streak. One cited opponent to the organ-for-sale mentality states that "proponents of fiscal rewards argue that since minorities are more likely to be poor, financial incentives are likely to be more attractive to them." Animal rights fanatics have concocted the bizarre word "speciesism" to scurrilously equivocate their cause with racism. Some members of this lunatic fringe go as far as "comparing the Holocaust and slavery with banal activities like animal husbandry and eating meat." The author further intimates how in 1933 the government of Germany advocated legalizing euthanasia and employed many of the same euphemisms bandied about today. A tiny familiarity with 20th century hi

Published by Thriftbooks.com User , 20 years ago
This is an eye-opening look at our increasing "thanatocracy" (Greek for "the rule of death"). With the ethic of "quality of life" riding high in America, Smith makes us confront some deeply troubling trends that seldom come up in serious conversation, because the issues involved have a high "yuck" factor, not unlike abortion. This book should be must reading for all medical ethicists, HMO executives, and legislators. It is not simply a matter that high-tech medicine generates more "dilemmas" over the care of the acutely or terminally ill. Increasingly, Smith shows, there is acceptance of devaluing human life, the veritable shredding of the historic Hippocratic Oath. This slippery slope points down a steep hill with no discernable bottom.

Modern medicine at a crossroads?

Published by Thriftbooks.com User , 20 years ago
In spite of the title, this book isn't about what most people would think it's about. It is not about abortion.Rather, it is about what author Wesley J. Smith terms "futile care theory" - modern medicine's inaction due to the direction of bioethics and cost-benefit ratios.Through compelling and often disturbing anecdotes Smith examines how "bioethicists" threaten patient welfare through redefinition, organ harvesting, and support for euthanasia.Futile Care Theory, he explains, allows physicians to base care decisions upon the patients' "quality of life", thereby often deciding that no care is the best care.I found Chapter 6 especially interesting, as Smith discusses how our culture protects animals at the expense of people. A similar action was taken by the National Socialist government in Germany just prior to the Nazi's creation of their "Final Solution" for the extermination of the disabled, gypsies, Jews, etc.Smith includes an appendix which shows the payback in terms of medical discoveries and cures which have resulted from animal research.In the end Smith advocates a "human rights" bioethics - one that will again value human life. His work is eye-opening and demonstrates just how much we have embraced what Pope John Paul II has termed a "Culture of Death." I recommend this book quite highly.
Copyright © 2020 Thriftbooks.com Terms of Use | Privacy Policy | Do Not Sell My Personal Information | Accessibility Statement
ThriftBooks® and the ThriftBooks® logo are registered trademarks of Thrift Books Global, LLC