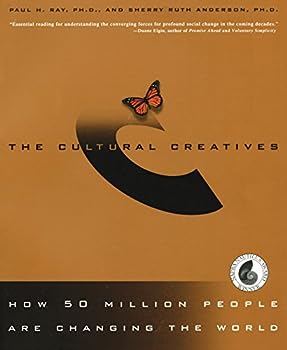 The Cultural Creatives: How 50 Million People Are Changing the World

A bestseller in hardcover, "The Cultural Creatives" explores a new subculture: people whose values embrace a curiosity and concern for the world, its ecosystem, and its peoples. 16 charts. This description may be from another edition of this product.

Living outside the box.

Published by Thriftbooks.com User , 21 years ago
This is an important book that deserves your attention if you are concerned about endangered species, global warming, nuclear weapons, pesticides and pollutants, domestic violence, poverty, discrimination, spiraling medical costs and health insurance, women's issues, global interconnections, or spirituality. Based on thirteen years of research and a survey of 100,000 Americans, there are 50 million Cultural Creatives (26 percent of the adults) living in the United States (p. 4). According to co-authors Paul Ray and Sherry Anderson, Cultural Creatives are interested in personal authenticity (p. 8), appreciate "intimate, engaged knowledge that is imbued with the rich, visceral, sensory stuff of life" (p. 9), give their time and money to support their convictions (p. 10), are concerned about global ecology and the well being of the people of the planet (p. 11), care about the quality of relationships and equality between the sexes (pp. 12-13), and value personal growth, spirituality, service to others, and activism (p. 15). "They are disenchanted with 'owning more stuff,' materialism, greed, me-firstism, status display, glaring social inequalities of race and class, society's failure to care adequately for elders, women, and children, and the hedonism and cynicism that pass for realism in modern society. They also reject the intolerance and narrowness of the Religious Right. They are critical of almost every big institution in modern society, including both corporations and government" (p. 17). They read books, listen to NPR, and watch less television than others (p. 35). Cultural Creatives include Ken Wilber, Annie Dillard, Robin Williams, and Robert Redford (p. 38).It comes as no surprise that our country is dominated by a Modern culture "found in the office towers and factories of big business; in banks and the stock market; in university science labs and high-tech firms; in hospitals and most doctors' offices; in mainline churches and synagogues; in the 'best' schools and colleges. It's the culture of professional football, basketball, and baseball leagues, chain stores and malls; most TV programs; and most 'mainstream' magazine and newspaper articles" (p. 25). Moderns set the rules and standards for our society (p. 25). They value making a lot of money, climbing the ladder of success, "looking good," shopping, and trends (p. 27). "Time is money," they say; "bigger is better" (p. 27). "Modernism lays out a dream that most of us take to be a promise," Ray and Anderson observe. "If you follow the yellow brick road to success, you will end up with the good life: the diploma, the job, the house, the cars, the promotion or the stock options or both, the children, their education and their accomplishments. But this road is really not so much a life path as a career path. The guideposts to success are really signs to the marketplace" (pp. 47-48). While the Moderns are still trying to "think outside the box," the Cultural Creatives "hav

Not Yet a Movement, But Showing Serious Potential

Published by Thriftbooks.com User , 21 years ago
Edit of 11 Sep 08 to add links. This book should be read together with Imagine: What America Could be in the 21st century, edited by Marianne Williamson. Taken together, the two books are inspirational while still being practical. Cultural Creatives as a book, and some of the other reviews, tend to over-sell the success of the emergence of an alternative lifestyle to Traditionalists (stereotyped as somewhat red neckish and religious rightists) and Moderns (stereotyped as ravish the earth anything-goes corporate carpetbaggers). The reality is that there are as many "cultural creatives" as there are people with disabilities in the United States--50 million. Not one quarter of the population, as one reviewer claims. Having said that, by way of somber stage-setting, I cannot say enough good things about this book. It should be required reading for every citizen, every student, and every public official. In a very real sense, this book strikes me as a truly seminal work that could help millions of individuals reframe their personal connection to one another, to their Republic, and to the earth. This is neither a tree-hugger book nor a mantras R us book. This book provides a thoughtful review of how different movements--first the environmental movement, then the human rights movement, and finally the consciousness movement--have come together to define an alternative lifestyle and alternative paradigm for political and economic and social relationships in the larger context of a sustainable "whole" earth. I found this book motivational and meaningful at both a personal level and a larger national level. At the personal level, its detailed and well-organized description of fifteen very distinct aspects of a "cultural creative" lifestyle helped me understand--as it has helped many others--that there is actually a category of people who have come to grips with and found solutions that enrich their lives--and this explains my great disappointment that the book does not offer a "resources" section at the end. I would have been very glad to discover, for example, a "Cultural Creative" journal or magazine that combined a strong book review section, art and culture, a consumer reports section tailored to the higher standards of the "CCs", new innovations in home restoration and remodeling, vacation options known to be attractive to CCs, etcetera. At the higher political level, I found the book constructive and just this side of a tipping point. An increasing number of people, all of them generally outside of Washington and not associated with Wall Street, clearly have some strong positive values and a real commitment to achieving reform through "many small actions". What this group has lacked is a means of communicating and orchestrating itself on a scale sufficient to demand respect from politicians and corporation. The Internet now provides such a vehicle--and as the Internet explodes from 3.5M people worldwide to 3.5B people worldwide,

There's hope for our species & our planet!

Published by Thriftbooks.com User , 21 years ago
Psychologists Paul Ray and Sherry Anderson have written a handbook for people who are working to make this world a better place. Their book, THE CULTURAL CREATIVES - HOW 50 MILLION PEOPLE ARE CHANGING THE WORLD - is a guidebook for those who are interested in saving the planet, nurturing their personal relationships, and being sensitive without being stomped on. You might be a Cultural Creative if you're into: books and music; arts and culture; stories; social causes, especially issues dealing with women and children; and authenticity. The authors have created an interesting test to gauge where you stand in the mix and use a lot of graphs throughout the book to identify cultural creatives and their issues. If you're from the '60s and you've ever wondered what to do with all the energy created during that period of our lives, this book will open your eyes. If you've sometimes felt like an alien in your own family, the authors will offer you comfort because you're not alone. Even if you're just wondering why cultural creatives are so passionate about their lives, this planet, and their causes, this book will help you put it all together. Cultural Creatives include such personalities as: Pope John Paul XXIII; Martin Luther King, Jr.; The Dalai Lama; Annie Dillard; Georgia O'Keeffe; Marc Chagall; Yo-Yo Ma; Robert Redford; Katharine Hepburn; and Bill Moyers. Pretty good company, don't you think? While the book represents a lot of research on the part of the authors, the data is never presented in a dry, boring format. I found it hard to put the book down. The information resonated with me -- I'm from the 60's -- and it gave me hope for the future of our species and our planet. Enjoy!

What do 50 Million People Have in Common?

Published by Thriftbooks.com User , 22 years ago
If you've ever felt odd, out of place, unusual or aware of seeing things differently from most, it might be because you are a `Cultural Creative.' This book is exciting because of the life it brings to the study of values in a thus far overlooked but growing cultural segment in America. This previously quiet but powerful group wields greater and greater influence in all aspects of life.Dr. Paul Ray surveyed over 100,000 Americans in the nine years before his 1996 report 'The Integral Culture Survey: A Study of the Emergence of Transformational Values in America' where he identified three distinct subcultures of values - Traditionals, Moderns and Cultural Creatives. He reveals, that this is a 'very unusual time in history - for change in the dominant cultural pattern happens only once or twice a millennium.' This is both wonderful and scary news. Paul's wife, partner and coauthor, Dr. Sherry Anderson stands in her own right with the wonderful 'Feminine Face of God: The Unfolding of the Sacred in Women' where she forewarned that the 'awesome planetary crisis in which we are now living is literally flinging us towards ... the next developmental step: to be in good relationship with all life...' Together they have injected vitality into the reams of data with up-close and personal interviews. They have partnered to create a wonderful, readable and intimate view into contemporary thinking and the dynamics between differing worldviews. A peep into the book reveals:"Direct personal experience is also important to Cultural Creatives in the projects they create and give their time and money to support. They expect to follow through on their values with personal action. Many are convinced that if they are not engaged, their convictions are "just talk." They express more idealism and altruism, and less cynicism, than Americans. Sixty-five percent say "having your work make a contribution to society" is very or extremely important. Fifty-four percent say "wanting to be involved in creating a better society" is very or extremely important. And their actions line up with these values ..."This significant work is progressive, insightful, optimistic and absorbing. It contributes to the worlds of values, culture and social transformation and it is good news to Cultural Creatives because it is validating and affirming. With far-reaching implications this is a book to curl up with and continue discussing and pondering long after the last page is turned.
Trustpilot
Copyright © 2022 Thriftbooks.com Terms of Use | Privacy Policy | Do Not Sell or Share My Personal Information | Accessibility Statement
ThriftBooks® and the ThriftBooks® logo are registered trademarks of Thrift Books Global, LLC