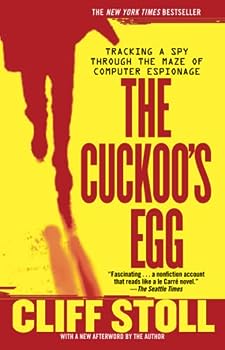 The Cuckoo's Egg: Tracking a Spy Through the Maze of Computer Espionage

Before the Internet became widely known as a global tool for terrorists, one perceptive U.S. citizen recognized its ominous potential. Armed with clear evidence of computer espionage, he began a... This description may be from another edition of this product.

Published by Thriftbooks.com User , 20 years ago
_The Cuckoo's Egg_ has everything most fictional detective novels wish that they had: a personable detective who does not mean to get involved as deeply as he does, federal agencies who cannot seem to take action, and a criminal mastermind who has everybody stumped until he encounters our detective. The best part of this whole book is that it really happened-- a feat that fictional mysteries can never match. I knew Stoll's work through the more technical article "Stalking the Wily Hacker" and was pleasantly surprised to see how well Stoll was able to translate the technical side into a book-length narrative. IMO, this is significantly better than other more recent books about computer crime and still worth a read today (both for information and entertainment). Highly recommended.

Now it's time for the Hunter to become the hunted!

Published by Thriftbooks.com User , 23 years ago
This was the second computer security book I read and it was like adding flame to a fire because it increased my curiosity and prompted me to want to know more about it, so I ended up reading Cyberpunk by Katie Hafner and John Markoff to get a more inside look. If you start reading it then you'll probably finish it the same day. It talks a scientist that stumbles on a mistake in the accounting part of his job as a scientist at Lawrence Berkely Lab and he makes the mistake into a chase through cyberspace. In the book the author takes on the role as a modern day Sherlock Holmes and in the end he realizes that it was only elementary.Dealing with the CCC (Chaos Computer Club), Hunter (the main hacker), and the different networks will really make you think and keep you on your toes. Read it and see for yourself just how intense the experience will be. I advise you to get some sleep before you start because you probably won't be getting any anytime soon.

Published by Thriftbooks.com User , 25 years ago
This book suceeds on many levels. Its a well written suspenseful spy novel that evolves very smoothly and engages the reader very early on. It is also an excellent description of computer / telecommunications technology that most anyone can understand, since he goes to the trouble to stop and explain, in laymens terms, UNIX utilities, daemon outputs, satellite technology, and microwave-oven protocol (check out the sneaker-melting fiasco on p 269). Stoll proves to be hell-bent on capturing the rogue user despite the lack of support from superiors and government agencies, and the toll it takes on his personal life. His frustrated accounts of his treatment at the hands of federal agencies as he petitions assistance from the FBI, the CIA, the NSA (among others) in capturing this potentially dangerous mole are testaments to the power of beaucracy in this country. However, he still manages to humanize the employees of these otherwise caricatured federal agencies by describing them as real people who want to help, rather than just surly trench-coated spies. I especially enjoyed reading about Stoll's low-tech solutions to slowing the hacker as he rifled through delicate documents by jangling keys over the connector to resemble static (simply cutting the line would have tipped the hacker off). This is a very enjoyable book, and I'd also recommend the reader try to find a videocassette copy of the NOVA TV special on PBS. Although it loses a lot of the book's details in the attempt to condense into one hour, it allows the viewer to see and hear the author, one of the quirkiest, most entertaining techno-goobers you'll come across.
Trustpilot
Copyright © 2022 Thriftbooks.com Terms of Use | Privacy Policy | Do Not Sell or Share My Personal Information | Accessibility Statement
ThriftBooks® and the ThriftBooks® logo are registered trademarks of Thrift Books Global, LLC