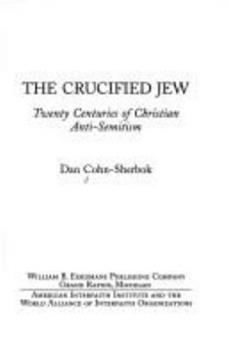 This description may be from another edition of this product. The author finds the roots of modern anti-Semitism in Christianity itself. The followers of Christ believed themselves to be the true heirs of the covenant with God that the Jews had rejected. Even...

Published by Thriftbooks.com User , 16 years ago
This volume provides a general introduction to the troubling history of these two great world religions over the last 2,000 years (or so). Starting with a lucid explanation of pagan anti-Semitism in the Greco-Roman world, Cohn-Sherbok takes us through centuries of violence and antipathy that culminated in the Holocaust of the mid Twentieth Century. He also concludes with brief chapters on post-Holocaust anti-Semitism, and on the possibilities for Jewish-Christian reconciliation. The latter, especially, provides a crucial "uplift" for the reader. This is a very readable text. It is NOT clogged with dense lists of demographic information or by obscure theological discussions. It provides, rather, a general overview of the demographic issues which contributed to Christian violence against Jews through the ages; as well as a digestable level of insight into the theological issues that contributed to and justified this violence. I highly recommend this book to anyone interested in understanding the cultural causes of the Holocaust, the reasons for the existence of the state of Israel, or the theological differences between Judaism and Christianity. I use this book as my core text in the college course, "Jesus and Judaism," that I teach. Along these lines, I would also recommend "Liberating the Gospels" by John Shelby Spong and "Why the Jews?" by Prager and Telushkin.
Copyright © 2020 Thriftbooks.com Terms of Use | Privacy Policy | Do Not Sell My Personal Information | Accessibility Statement
ThriftBooks® and the ThriftBooks® logo are registered trademarks of Thrift Books Global, LLC