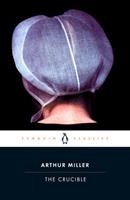 A haunting examination of groupthink and mass hysteria in a rural community A Penguin Classic I believe that the reader will discover here the essential nature of one of the strangest and most awful chapters in human history, Arthur Miller wrote in an introduction to The Crucible, his classic play about the witch-hunts and trials in seventeenth-century Salem, Massachusetts. Based on historical people and real events, Miller's drama is a searing portrait...

A wonderful story of pride, love, power, and redemption

Published by Thriftbooks.com User , 17 years ago
The Crucible, Arthur Miller's allegory for the McCarthy era trials, is a wonderful story of pride, love, power, and redemption. Act One sets the stage very nicely, with a sense of distrust and suspicion in the air that's just waiting to erupt into full hysteria. We're introduced to several interesting characters. There's Parris, the self-righteous minister; Abigail, the voluptuous young woman; and Proctor, the protective farmer. Of course, these are just a few of the characters, but, in my opinion, they are the most interesting. My only complaint on Act One is the lengthy side notes made by Miller used to make characterizations that didn't fit into the play otherwise, and explain historical facts and rumors in more detail. Despite these missives being useful, they also tend to be quite intrusive. I often found myself backtracking through the pages to remind myself what was going on. Act Two continues to set the stage for impending hysteria, with the arrest of Elizabeth and numerous other women accused of witchcraft. Giles Corey and Francis Nurse's wives are also taken into custody, despite the evidence against one of them simply being an interest in books. Act Three introduces us to the unrepentant Judge Danforth. In my opinion, he's the second most unlikable character, bested (for serious lack of a better word) only by Abigail. He's the main proprietor of the idea that neutrality on an issue is simply non-existent, and this coupled with his vicious ideology make him quite a deplorable character indeed. It is also in this act that John Proctor, the protagonist, is charged with witchcraft, while his wife is let free due to a pregnancy. Tensions stir, causing a complete eruption, ending in the resignation of Minister Hale from Danforth's proceedings. Act Four finds Proctor in jail, facing execution unless he confesses to having been under the control of the Devil. In Elizabeth's confidence, he firmly defends his innocence, but ponders the possibility that perhaps he should confess to save his own life, which Elizabeth supports. Proctor reluctantly decides that he will lie and confess to save his own life. However, when he finds that Danforth intends for his confession to be in writing and hung upon the church door, he retracts his confession and states that he would rather die than tell a lie and be the judge of others. The curtain falls as Proctor is brought out to hang, with a cry from Danforth of, "Hang them high over the town! Who weeps for these weeps for corruption!" There's a running sense of doubt among all the characters, which perhaps adds to the fear of God that causes the eventual aberration. It's an extremely moving tale on its own, but the fact that it's almost a flawless mirror of the McCarthyist era makes it all the more affecting. The characters are all amazingly believable; I truly felt pain for Proctor, Elizabeth, and Giles, just as I truly felt contempt for Parris, Danforth, and Abigail. I recommend this play to anyone,

"Show honor now, show a stony heart and sink them with it."

Published by Thriftbooks.com User , 17 years ago
When John Proctor says these words to his wife Elizabeth at the conclusion of this play, he has faced accusations of being in league with the Devil and is ready to face consequences meted out by the religious tribunal he has faced. Though he has sinned by committing adultery with Abigail Williams, he believes the witchcraft trials which have ultimately consumed him to be the result of human, rather than godly, forces. Playwright Arthur Miller sets the scene for this action in an Overture explaining the theocracy which controlled Salem. Powerful clergymen, some more rigid in their interpretations of Scripture than others, "protected" citizens by enforcing conformity with the church's teachings. Through detailed character sketches inserted into the structure of the play, Miller broadens the realism, and when a group of hysterical young women makes accusations of witchcraft, resulting ultimately in the deaths of nineteen of their fellow-citizens, Miller has prepared his audience to accept the trials and the behavior of the characters as plausible. His straightforward prose, use of homely details, and simple sentence structure (despite its archaic tone) further add to the realism. When the affair between John Proctor and Abigail Williams, who precipitates and then promotes the hysteria among the young "afflicted" girls, is revealed within the play, the modern reader is given a "hook" with which to identify with characters and situations which might otherwise feel foreign. Miller's play is a powerful revelation of themes involving mass hysteria, fear of the unknown, and a belief in the essential evil hidden within the hearts of men. As the accused are required to prove their innocence, questions regarding the role of individualism within this society, its intolerance of differences, its justice as defined by the state and by clergymen who differ, and the hysteria which grows from repression all surface within the dramatic action, leading to an intensity of feeling rare in modern theater. When John Proctor is faced with a choice of telling the truth and being sentenced to death or lying and being saved, the ironies of the play are fully revealed. Written in 1952, slightly before the McCarthy era, Miller's depiction of these trials presages the McCarthy hearings and illustrates his belief that the fear of Communism is the equivalent of fear of the Devil in colonial times. Miller, however, has selected facts which illustrate his point of view and his themes, making no pretense of accuracy regarding the witchcraft trials themselves. In reality, Abigail Williams was eleven, and John Proctor was sixty, quite different from the dramatic circumstances here. Mary Whipple

Published by Thriftbooks.com User , 19 years ago
The last time I read "The Crucible" was in high school back in the 1960s. Over the years I had forgotten much of what it was about, however it wasn't until I listened to the excellent production by L.A. Theatre Works that the raw emotions of this gripping story came to life.As a few other reviewers here have suggested, this story works better as a play, not just a high school "textbook." I'd suggest that any students who have to read this book also take the time to listen to this recording.My impression this time is that a merciless, judgmental religion is no true religion. I hope that young readers, or listeners, will realize that this is not the type of religion that Christ intended.

A classic - withstands the test of time.

Published by Thriftbooks.com User , 22 years ago
A considerable number of plays from the 50s come across as melodramatic, cynical and stilted today. In contrast, Miller's classic remains powerful and universal - but not for the usual reasons you'd expect. As a drama it has more in common with 19th century works in the tradition of Ibsen or even the novels of Hugo than with the 50s authors like Williams, Beckett, O'Neill, or even the Miller of Death of a Salesmen. Instead of the drab, pathetic, cowardly, sad, sniveling, or absurdist characters of some of his contemporaries we see people of moral stature. People in the mist of an irrational hysteria with normal human frailties but with moral sense. An interesting dimension is added in the portrayal of the villains. At one point in the play it seems expedient for the 'chief inquisitor' to temper or betray his crusade. He chooses to follow his vision (I am being vague to avoid giving away any plot). Compare this to Hugo's Javert in Les Miserables. By writing the villain in such a manner both authors create a drama that pits two moral codes - two views of reality. This elevates Miller's play to the level of a romantic realist drama.Many of the other reviewers will point out the intended parallels to events of the 50s. However, Miller's play is more universal and can be viewed in relation to any fanatical hysteria. This is still timely today given the Politically Correct hysteria on college campuses.

Dramatic Tension At Its Best

Published by Thriftbooks.com User , 22 years ago
For dramatic tension, for a resounding lesson in the ethical treatment of others, this four-act play excels. Set in the 1692 Salem witch trial debacle--a black eye in our heritage--Miller wrote the play parallel to the McCarthy hearings. America in the 1950's was then in the classic, titan struggle against a new threat: Communism.But in 1692, 19 people were executed for the crimes of witchcraft and associating in the black arts. Miller takes this historical arena, stirs in a failed love tryst, and the dramatic tension never lets up.The play is worth studying for several reasons: First, it has a strident moral tone that is extremely important for students to explore. Justice is not always a given in our society, and in the execution of justice, if we lose our sanity, we can err into several pitfalls of bad logic, or fallacies--the fallacies of Bandwagon, Hasty Generalization, False Cause, Two Wrongs Make a Right, and so on. Second, it teaches us our own history, with scars. Third, through Miller's deft use of language, we watch (read) a classicly structured play develop.
Trustpilot
Copyright © 2022 Thriftbooks.com Terms of Use | Privacy Policy | Do Not Sell My Personal Information | Cookie Preferences | Accessibility Statement
ThriftBooks® and the ThriftBooks® logo are registered trademarks of Thrift Books Global, LLC