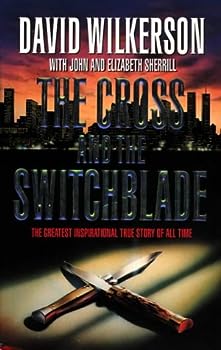 The Cross and the Switchblade

This description may be from another edition of this product. The True Story of a Man Who Risked It All for God With over 15 million sold, this modern-day classic is now available in a new edition especially for young readers ages 9 to 12, complete with 30...

😊 Poignant story of what can happen when you obey the Lord at His prompting to serve!

Published by Melanie , 7 months ago
A country God-filled minister takes to the hardened streets of NY City. Times Square in fact. Prostitutes, drug addicts and gangs hear about the love Jesus has for them. It changes them. In this biographical story, Wilkerson shows love and mercy to gang members who CRAVE a 2nd chance and forgiveness. People who think they are too far gone in their criminal behavior realize that God is speaking right to them through Pastor Wilkerson. You'll want to go evangelize after reading this. ❤ Do it! 😊

Published by Thriftbooks.com User , 3 years ago
I love reading about the testimonies of others and how other people grow spiritually. I think it is always good to get a different perspective from someone else’s angle. I believe this would be a good book for a study group to use and apply to help lead others away from a bad lifestyle and get them on better footing

Published by Thriftbooks.com User , 19 years ago
David Wilkerson listened to the voice of God and obeyed. When he did, the Lord grew a holy unction into an international ministry which has now touched millions of lives around the world. From Teen Challenge Centers around the world to Times Square Church, now representing a congregation from 135 countries, to European Crusdaes and worldwide missions, this ministry is centered on Jesus Christ. It is the unique focus on the personality and power of the Holy Spirit which separates this work from so many others.The call to action was spoken into his life, and into the lives of a New York City street gang, headed by Nicky Cruz, in the late sixties. The Cross and the Switchblade is a modern day classic of God's power and grace infusing the most dangerous and difficult layer of society; the violent gangs.The message is life changing, then and now.

The reality of recovery ministry

Published by Thriftbooks.com User , 20 years ago
The story of how David Wilkerson came to found Teen Challenge should be a must read for anyone who follows Jesus Christ. The Cross and the Switchblade describes how Wilkerson put feet on his faith that took him from rural Pennsylvania to the streets of New York City. It's the story of how a pastor followed the leading of the Holy Spirit and reached out to minister to people with whom the churches would not associate.Wilkerson describes in his book how essential it is to meet the unloved where they are, rather than waiting for them to show up in church all dressed up and ready to worship within the ranks of the clean and respectable. He also rightly emphasizes the importance of follow up, how one can't just expect to go out and distribute tracts or preach from street corners without also developing real, loving relationships with people and ministering to their needs, both spiritually and physically.Now that Teen Challenge International has grown to over 200 centers around the world, it is interesting to note that the struggle in recovery ministry continues to be much the same: It's extremely difficult to get people to reach out in love to those who have never been loved, and it's nearly impossible to get church members to venture outside their doors to love their neighbors as they love themselves.I praise God for Rev. Wilkerson and the way that he listened to God and ventured out in faith. I thank him for sharing the story of his work.

The Cross and the Switchblade

Published by Thriftbooks.com User , 21 years ago
The book The Cross and the Switchblade, which took place in 1958, was an excellant book. It was an really inspirational story. It can open people's eyes and let them know that things in this world are worse than we think. It made me more considerate. This book is about a reverend named David Wilkerson who went to New York to get seven teenagers off a murder trial. He spontaneously went because he saw their faces in LIFE Magazine and felt the need to help them. It helped people know of a Christ through reverend Wilkerson.This story opended up a lot of people's eyes. The reverend's for one, because he didn't know theat these problems existed in New York. It also affected the people that he came in contact with and the people who read his book because he was and still is an inspiration to all of them. Me personaly because it helped me become more courteous and aware of people with those kinds of problems.

As relevant today as when it was writtten.

Published by Thriftbooks.com User , 22 years ago
It's hard to believe that a book written about events that took place almost forty years ago could just as easily have been written today. David Wilkerson followed God's call to work with "lost" children, and the work continues today. Miracles do still occur, and Wilkerson has witnessed them. His story about the inner city gangs of New York is gripping, but the fact that his "Teen Challenge" centers may be found all over the world is just as gripping. An incredible story.
Copyright © 2020 Thriftbooks.com Terms of Use | Privacy Policy | Do Not Sell My Personal Information | Accessibility Statement
ThriftBooks® and the ThriftBooks® logo are registered trademarks of Thrift Books Global, LLC