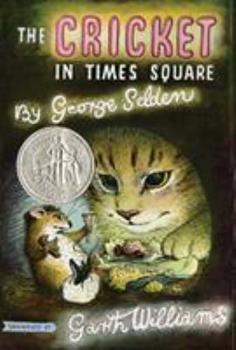 The Cricket in Times Square

(Book #1 in the Chester Cricket and His Friends Series)

Tucker is a streetwise city mouse. He thought he'd seen it all. But he's never met a cricket before, which really isn't surprising, because, along with his friend Harry Cat, Tucker lives in the very heart of New York City--the Times Square subway station. Chester Cricket never intended to leave his Connecticut meadow. He'd be there still if he hadn't followed the entrancing aroma of liverwurst right into someone's picnic basket. Now, like any tourist...

Not hardcover as advertised!

Published by Bbster , 13 days ago
I thought I was getting a hardcover, I could've bought a better condition paperback if it was advertised correctly.

Published by Rose Bryce , 1 month ago
This is such a beautiful beautiful book! Read it! You'll love it forever!!

Published by Thriftbooks.com User , 16 years ago
My 2nd grader and I listened to the audio book on a long drive, and then he read the book himself early in third grade. It is a quiet, slowly-unfolding story, with memorable characters, as well as a great tribute to "old" New York City. Characters include a very realistic Italian immigrant family who own a newsstand underground at a subway entrance, an elderly Chinese man, exotic to the young lead boy character, yet approachable and very kind, and a host of helpful and sometimes mischievous animal life that gets particularly busy when no humans are around, including of course, the cricket with a talent for opera singing. My son and I are voracious readers, and we rate this evocative, tender, and imaginative story in our top 5 of all time, along with classics like Charlotte's Web.

Published by Thriftbooks.com User , 17 years ago
This book gives you a warm feeling inside as you settle down to read this tale. It is a good rainy day book. The ending is somewhat, well different, but it doesn't leave you sad or hanging. I would recommend this book to other thirteen-year-olds. It is not way to easy, or overly difficult to read. I would actually reccomend it to ages 11-14. All in all it is a good beginning book for a series of entertainment.

The Cricket In Times Square Is Awesome!

Published by Thriftbooks.com User , 21 years ago
The Cricket in Times Square is the first book in the series. It's about a cat named Harry, a mouse named Tucker, but it's mostly about a cricket named Chester. Chester lives in Connecticut. He was found by a lady who stuffs him in her purse. He gets carried all the way, to New York in a subway station. There's a family who sells newspapers in the subway station. And there's a boy who finds Chester and picks him up and buys a special golden cage with a bell that hangs down. Once Chester hears the bell he is able to sing. Then Chester has his own concert.My favorite part is when Chester has his own little concert and he makes a lot of money because Chester makes beautiful music.I would recommend this book and series to grade two to six because they are great fantasy stories about animals, but I would recommend them the most to people who like fantasy and animals.By the way this book is the first book out of seven books. They're great books to read.

You won't be sorry

Published by Thriftbooks.com User , 22 years ago
My 6.5 year old son was captivated by this story, and also by the fabulous reading by Rene Aubergenois. The voices are supurb, Harry Cat just as street smart as he could be, Tucker Mouse a real operator, and Chester...so sweet. The musical backgrounds as Chester sings are right on...a real listening experience! Great for a summer vacation car ride...you'll listen to it again and again. A good old fashioned story for kids of all ages!
Trustpilot
Copyright © 2022 Thriftbooks.com Terms of Use | Privacy Policy | Do Not Sell or Share My Personal Information | Accessibility Statement
ThriftBooks® and the ThriftBooks® logo are registered trademarks of Thrift Books Global, LLC