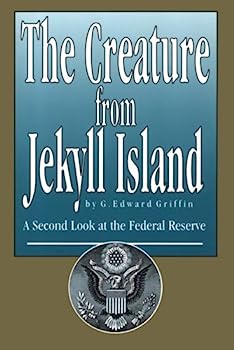 The Creature from Jekyll Island: A Second Look at the Federal Reserve

We receive 81 copies every 6 months.

G. Edward Griffin is to be commended for this splendid work. At first glance The Creature from Jekyll Island is a huge book. While this may be daunting to some, once the book is actually started, it... This description may be from another edition of this product.

A Bechmark In The Realm Of Civic Knowledge!

Published by Thriftbooks.com User , 17 years ago
Author G. Edward Griffin's book "The Creature From Jekyll Island: A Second Look At The Federal Reserve" is a most well researched and written historical text. Griffin presents the background with almost an air of mystery that the reader must peel away, like layers of an onion, to reveal the truth. The book provides, in great detail, the time, place, and manner in which the groundwork for the Federal Reserve was laid, and more importantly, the reasons why. Griffin explains why even the name is misleading. The Federal Reserve is not a federal or governmental administration, and it is not a reserve, such as a bank. Also provided is great historical detail about the commerce and industry in our nation during the Nineteenth and early Twentieth Centuries. This book will not disappoint the reader looking to expand his or her knowledge of how the collective financial machinations of our country are run. I read this book during my undergraduate years and once presented the book in defense of a historical argument I had with one of my history professors. Needless to say the professor looked at my reference (the book is so well researched), acceded to my contention, borrowed the book "for his own enrichment" and never gave it back! I gratefully let him keep it so maybe he would soften his ascribed "socialist democrat" leanings. Unfortunately I am sans the book this day. Oh well, we march on. As the topic of Civics is not really taught in public schools, or even required in undergraduate studies anymore, this book will serve to "illuminate" the reader into the background of how private finances and politics are inseparable. My only criticism of this text is the highlighted aspect of a government conspiracy at work. Not that Griffin's arguments have no merit, they certainly do, as Lord Acton so aptly is quoted "Power corrupts and absolute power corrupts absolutely!" However, the mere aspect of "a conspiracy notion" is all the extremists on all sides need to "debunk" a truly great piece of historical research and writing. I rate this wonderful book five stars. It is well worth the money and deserves a place on the library shelf of every institution and the home of every student of history.

The Most Comprehensive Book Written on the Federal Reserve

Published by Thriftbooks.com User , 22 years ago
This book is without a doubt the best book written on the "Federal" Reserve (which is about as "federal" as Federal Express). The book's four chapters explaining what money is (and isn't!) are the best I have ever read (and that includes the late, great economist Murray Rothbard's "What Has Government Done to Our Money"). My only qualm with this book is that Mr. Griffin should have left out the "C" word (i.e., conspiracy) from the text. He should just tell the history of the "Fed" along with his excellent economic analysis and let the reader figure out for him or herself what is going on. It becomes difficult to recommend this book to anybody outside of the John Birch Society (for which Mr. Griffin is a writer). But all in all, Mr. Griffin has done an admirable job. This is the true story of the monstrosity we affectionately call "The Fed" -- not like that Establishment whitewash on the "The Fed" by Rolling Stone writer William Greider called "Secrets of the Temple." For those of you who are skeptical about reading Mr. Griffin's long tome, you might want to start with Murray Rothbard's much shorter "The Case Against the Fed," before moving on to the Griffin work.
Trustpilot
Copyright © 2022 Thriftbooks.com Terms of Use | Privacy Policy | Do Not Sell My Personal Information | Accessibility Statement
ThriftBooks® and the ThriftBooks® logo are registered trademarks of Thrift Books Global, LLC