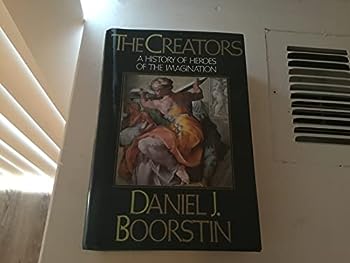 The Creators: A History of Heroes of the Imagination

(Book #2 in the Knowledge Trilogy Series)

By piecing the lives of selected individuals into a grand mosaic, Pulitzer Prize-winning historian Daniel J. Boorstin explores the development of artistic innovation over 3,000 years. A hugely ambitious chronicle of the arts that Boorstin delivers with the scope that made his Discoverers a national bestseller. From the Trade Paperback edition.

A Literary Hero for our time

Published by Thriftbooks.com User , 20 years ago
Daniel Boorstin makes no apology for being a Jewish liberal in the classical Western sense. In fact he states that he sees history from a "Euro-centric" perspective, which, after all only makes sense since that is his and our heritage. He is writing a book for mainly Americans about the history of creation. It is the 2nd of the "Knowledge Trilogy": The Discoverers, this book and "The Seekers". If the Discoverers covered the searching mind then the Creators is a study of the searching soul. Covering topics as far apart as music, art, poetry, religion, architecture, literature, psychology and science, he skillfully reviews the history of man's search for himself. His quirky yet factual tidbits of history enlighten the story of (mainly) Western culture although he does examine aspects of other cultures. If you are a person interested in all things human then this is the book for you. The Creators has been criticized for its so-called "Western" outlook as if that automatically made the work suspect. Why is the European viewpoint less worthy than say, an Arab viewpoint? The West has profoundly affected the world - and continues to do so today - unlike any other culture with such ideas as liberty, democracy, pluralism and individualism. And what kind of person denigrates their own culture for no other reason than its trendy to do so? This is a magnificent work that will keep you enthralled for days. Get it now

The "Cliff Notes" of 2000 years of Western Art History

Published by Thriftbooks.com User , 20 years ago
I have completed "The Creators" Heros of the Imagination by Daniel Boorstein. One of the three in a series. The other two are, "The Discoverers" and "The Seekers" Though my copy is beaten up and falling apart, I recommend this book to any inquisitive mind who thinks that they lost out on a classical education. My reading of the book took well over a year, in little reads here and there, when I could. Absolutely jam packed with useful information about the stuff that I didn't learn in my US public schooling. Well written for covering over 2000 years of history and the creative artists, writers, musicians, etc. and other influential people of the period. Sometimes I had to set with a dictionary open and ready, just to get through the sections, especially the part on Greek temple construction. The reading of this book helped me to appreciate more of what I've seen in Rome, Italy and elsewhere on my trips. The sections on Dante, Giotto, Shakespeare, Goethe, Verdi, Wagner, Beethoven, Voltaire, Dickens, Sartre, Kafka and others were very revealing and stuff that I had never been made aware of. Everything in the US has been tremendously influenced by Europe and before that by the Greeks and the Romans. Nothing is new, the Romans made concrete 2000 years ago.

It is about the individual as a creator

Published by Thriftbooks.com User , 22 years ago
I am totally dissatisfied with most reviews of this book. I think most of that people did not understand what the book is all about. Boorstin traces, wonderfully, in my opinion, the history of the individual as a creator of original and personal ways to see and interpret the world. Of course, he had to focus on the Western culture. I am amazed to read politically correct people enraged about Boorstin's supposed "trashing" of non-Western cultures, something I definitely didn't find in the book. He describes exactly why it was the Western culture the one that allowed the individual to become a real creator, not just a fine artisan. He never says Western culture is "better", only different in that it produced the only way to be an artist: be an individual (for good and bad). And he is right. The book is fascinating in the way it describes the rise of the individual. Of course, the path he chose could have been different. But it's very illustrative. The book can not be boring. It shows exactly the kind of geniuses that created art. Most of them, by the way, lived difficult and often tragic lives. I recommend it to every one interested in finding out how and why modern art was born and developed. Besides, it is full of interesting, even funny, anecdotes about the lives of the creators. If you read it, it will be the best stimulus to see, read, and listen to some of the most important creations of humankind.
Trustpilot
Copyright © 2022 Thriftbooks.com Terms of Use | Privacy Policy | Do Not Sell My Personal Information | Cookie Preferences | Accessibility Statement
ThriftBooks® and the ThriftBooks® logo are registered trademarks of Thrift Books Global, LLC