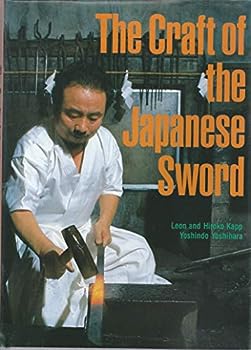 The Craft of the Japanese Sword

From raw steel to tempered blade, this text presents a visual account of the ancient craft of swordmaking as practiced in modern Japan. Well over a thousand years old, the tradition of swordmaking in... This description may be from another edition of this product.

Best intro for the beginner

Published by Thriftbooks.com User , 17 years ago
This is probably the best book in English ever written for learning how to understand and appreciate the Japanese sword. When this book first appeared almost 20 years ago, there was little detailed information in English outside of specialist journals and similar publications on how they were made, especially the details of the hand-forging, heat-treating, and tempering methods which are still being done today just as they were thousands of years ago. By varying the carbon content and temperature of the forge, the smith can either add or remove carbon or oxygen from the steel to get the right carbon content in the finished blade (about 0.7 percent). I enjoyed reading about the tatara, or iron smelter, which wasn't invented in Japan but seems to have originated in Manchuria and then brought to Japan by way of China or Korea. It's during this phase that certain impurities such as sulphur are removed as slag and carbon is added to produce steel, although the resulting steel is still low quality as the distribution of carbon isn't uniform enough to produce a strong sword.It was also fascinating to learn about how the hamon or temper line is created and made to appear (it marks the boundary between the hard martensite edge and the softer baenite), and the rediscovery of how to create the utsuri, which was highly prized on swords of the Bizen school but was lost for hundreds of years until just recently, and involves another change in the crystalline structure of the steel between the side and the back of the blade. I also learned how to appreciate the different crystal structures (nie and nioi) and textures that make up the appearance of the blade (jintetsu) and what to look for in a good sword. There is also a detailed discussion of the different types of hamon and which are preferred and prized.Some of the details are humorous and ironic. I learned that a modern swordsmith can legally only make two swords a month. This is because the great smith Mayairi could only make two a month when they standardized on this more than half a century ago. But that's because Mayairi insisted on cutting up his charcoal by hand to make it uniformly fine with a scissors, which took up most of his time. Most smiths crush the charcoal and then use a sieve to select just the right size pieces for the forging process. But because Mayairi was the greatest smith of his time the law was based on his output and has never changed since. This has resulted in many smiths travelling to Taiwan or China to make extra swords for the export market during part of the year to increase their income, since they can't sell them in Japan.There are also chapters on every phase of the sword-making process, including sharpening and polishing, the making of the habaki, the construction of the saya or scabbard and the other koshirae, or fittings such as the tsuba (guard), and so on. Just the polishing process itself can take two weeks and involve many different steps in terms of the sequence of

A must for collectors, swordsmiths, and martial artists...

Published by Thriftbooks.com User , 21 years ago
This book goes into the details of the making of a Japanese sword.I own Sato's "The Japanese Sword : A Comprehensive Guide" as well as Yumoto's "Samurai Sword a Handbook", and they are clearly not as complete as that one (esp. Sato's.)"The Craft of the Japanese Sword" is amazing in that it has a large number of extremely clear B & W pictures. Those are clear enough to show examples of the steel's grain, of what an utsuri looks like, of what makes nie different from nioi, of the appearance of the hamon at each stage of the polishing, etc. The clarity & quantity of the pictures is the main asset of this book to the katana enthusiast, be they interested in modern or antique swords, made in Japan or not.The book is also great because of the info it provides on all the stages before the blade is forged (i.e., how to obtain the necessary steel ingot, or tamahagane) and after it is forged (polishing, of course, but also the craft of the scabbard, of the fittings, etc...)This is a super dense book, packed with info, where not a single line is wasted. I cannot recommend it enough to anyone interested in the Japanese swords, be they swordsmiths, martial artists, or collectors. The book is geared toward the swordsmiths but provide so much info that a martial artist or collector planning to invest into a fine blade should absolutely read that book. This will prevent many a disappointment...

Simply the best book available on the subject

Published by Thriftbooks.com User , 21 years ago
This book suceeds in explaining the truth behind the numerous myths about the Japanese sword, and does it in a concise, complete, and entertaining fashion. For the knife nuts (like this reviewer) who are tired of scholarly translations of Japanese originals cluttered by footnotes and stuffy academic prose, this book is a breath of fresh air. Best of all, this book also covers in detail several related crafts like sword polishing, habaki-making, and scabbard carving which are rarely mentioned in other books. Generous helpings of photographs and diagrams complete the text. For the blade enthusiast, this is the only book you need to buy on the subject.

This book is excellent for beginners to learn about swords.

Published by Thriftbooks.com User , 22 years ago
I know a little about Japanese swords but not all the details of how they were made. This book is a great beginning for those who want to understand the manufacturing processes of a Japanese sword. I have only one complaint, that the pictures are not in color; B & W prints are good but sometimes color can show more details. It's a good buy.

Published by Thriftbooks.com User , 24 years ago
This is a terrific overview of what it takes to make japanese swords. The book followes the production of the sword from the begining to the final product, starting with the type of steel all the way to the special fittings. Althoug not into the depth some are looking for, it does explain the general steps for making the entire sword through the dialoge of experts working in Japan
Copyright © 2022 Thriftbooks.com Terms of Use | Privacy Policy | Do Not Sell My Personal Information | Accessibility Statement
ThriftBooks® and the ThriftBooks® logo are registered trademarks of Thrift Books Global, LLC