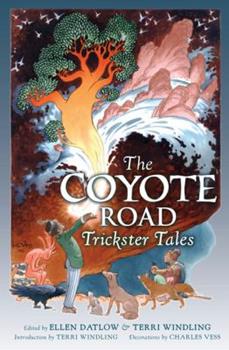 (Book #2.7 in the The World of Riverside Series)

Coyote. Anansi. Brer Rabbit. Trickster characters have long been a staple of folk literature-and are a natural choice for the overarching subject of acclaimed editors Ellen Datlow and Terri Windling's third "mythic" anthology. The Coyote Roadfeatures a remarkable range of authors, each with his or her fictional look at a trickster character. These authors include Holly Black (The Spiderwick Chronicles), Charles de Lint (The Blue Girl), Ellen Klages...

Published by Thriftbooks.com User , 14 years ago
Is it just me, or do short story collections get the short end of the stick these days? With a love of child and YA novels at an all-time high, you'd think that some of that lovin' would slough off onto the other forms of fantasy out there. The shorter forms. Yet ask your average everyday kid to list their favorite collection of short stories and nine times out of then you'll find yourself facing a very blank look. You can't make the argument that there aren't worthy short story collections out there either, since books like "The Coyote Road: Trickster Tales" crop up every so often without much fanfare or media blitz. Such collections are subtle sly little affairs. They do not demand your attention, knowing full well that if you accidentally happened to stumble into reading one of their tales you'd be utterly unable to extract yourself until you'd swallowed each and every story in the collection whole. That's sort of what happened to me when I was given a copy of this book. As someone whose favorite book as a teen was Dandelion Wine by Ray Bradbury, I'm inclined to enjoy tales of thirty pages or less (which probably explains why I like to review so many picture books). Top that off with the subject matter (tricksters of every age, gender, generation, and stripe) and the author roll (everyone from Holly Black and Michael Cadnum to Ellen Klages and Jane Yolen) and you've got yourself one heckuva book. Use the lack of marketing surrounding its release to your advantage. Consider it your own personal secret and discovery. Twenty-six tales, some prose and some poems, and all of them intriguing and enticing by turns. And just listen to their content. A deal with the devil takes the form of a competitive eating contest. A spirit decides that it will do everything possible to stop a classroom from diagramming sentences. A boy draws inspiration from Brer Rabbit to outsmart his kidnappers. A girl collects ghosts on ribbons, taking them wherever she goes, feeding them her blood. Each story relates to a trickster character of some sort. Sometimes they are wild spirits of the earth and air. Other times, classic characters like the devil, Hermes, and Raven. The mix of good and bad, unpredictability, self-interest, and good humor weaves in and out of these stories and the sheer variety is perhaps the collection's biggest lure. Both original and traditional, this is a fine and fancy mix of the wildness of spirit lying at the heart of some of the world's best stories. I'm not saying that you have to know the history and background of trickster tales to enjoy a collection of this sort. I'm just saying that it helps, and for this reason I was particularly taken with both the Preface and the Introduction to this book. In the Preface, the editors skillfully tie-in old trickster tales to new by pointing out that contemporary pop culture is full of such characters. Consider Captain Jack Sparrow from the "Pirates of the Caribbean" movies, after

Keeping an eye on Coyote

Published by Thriftbooks.com User , 14 years ago
It's important for us to remember that the mythic world isn't far away in "Once upon a time" land, but all around us. I like the fact that these stories connect the mythic world to the world we think of as reality. Like all anthologies, some approachesand some stories appealed to me more than others, but generally, I really liked all the different perspectives on Trickster. It's always a good idea to keep him in mind, because if you forget him or ignore his power, you become subject to his tricks!

Published by Thriftbooks.com User , 14 years ago
I picked up The Coyote Road because it's edited by Ellen Datlow and Terry Windling. This one is in the same line as The Green Man and The Faery Reel, so it's aimed at adults and collects some of the bigger names in the Mythic Fiction genre. This volume aims to be a collection of trickster tails, but surprisingly, the majority of the stories don't involve what I would generally consider "tricking". I was somewhat disappointed in this, as I was expecting some modernized variants of the Coyote, Loki and Anansi myths. These stories do not tend to fit that pattern, though they touch on the traditional myths by reference. That said, given that this is an anthology, some of the stories do -- just not the work as a whole. "The Listeners" by Nina Kirki Hoffman does fit my conception of the trickster theme, focusing on Hermes. As usual, I absolutely enjoyed Nina's writing, and time (for the most part) just dropped away as I read it. Basing the story in ancient Greece provides a backdrop for the story to meander through myth and social commentary, taking the reader along for the ride. Unlike most of Nina's works, I didn't feel like I was pulled into the middle of the story, but that's OK, I can handle stories with a bit of structure too. I will say that the ending is both surprising and wholly appropriate, though I shan't spoil anything. "The Fiddler of Bayou Teche" by Delia Sherman, however, does give the feeling of starting in the middle. While, in framing, the story matches the common "devil challenge" pattern, the characters are believable enough that it's not too jarring to be pulled along somewhat predictably. Luckily, the end, while not surprising, breaks out of the pattern. Most interesting is that the story is set in an alien (to me) culture, and is not well explained for the outsider. This is a nice contrast to the realm of stories that include an outsider to provide exposition to the reader. "Friday Night at St. Cecila's" by Ellen Klages uses an interesting game-based theme. There are a few tricks, but it didn't really feel like a trickster tale to me. However, I was pleasantly surprised to find the character to be as believable (though not as fleshed out, but hey, it's a short story instead of a novel) as those in _The Green Glass Sea_. I did find it somewhat contrived, but enjoyable nonetheless. After all, it's hard to write stories that are based on board games. I think that she did a decent job with the idea. "Crow Roads" by Charles de Lint was somewhat disappointing. I generally like his work a lot, but this one feel somewhat flat. The story fits his pattern, but the character of mystery wound up being somewhat weak. Upon reflection, I suspect that part of the problem was that in most of de Lint's short stories I am already either familiar with the characters or with the world in which the story is placed. In this case, more time should likely have been spent to establish one of the two. "Cat of the World" by Michael Cadnum was a huge s
Copyright © 2020 Thriftbooks.com Terms of Use | Privacy Policy | Do Not Sell My Personal Information | Accessibility Statement
ThriftBooks® and the ThriftBooks® logo are registered trademarks of Thrift Books Global, LLC