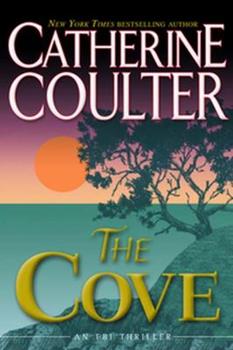 (Book #1 in the FBI Thriller Series)

The hard-charging thriller that launched Catherine Coulter's bestselling FBI series-now in hardcover for the first time. Sally St. John Brainerd is on the run from the authorities, who want to question her about her possible involvement in her father's murder. FBI Special Agent James Quinlan goes undercover in the picturesque town of The Cove-home of the World's Greatest Ice Cream-where Sally seeks sanctuary. But The Cove and its elderly residents...

Started out great but...

Published by Bak99 , 3 years ago
Started out to be an interesting mystery, relatable/quirky characters, but end was a bit ridiculous and unbelievable.

Published by Thriftbooks.com User , 20 years ago
I bought this book in an airport because the back sounded good. It was such an enthralling read I didn't put it down once - thank goodness it was an overseas flight so that I didn't have to wait to end the suspense!I kept trying to guess what was going on but couldn't. I knew something was up with those old people, but I never suspected what was really going down until the end. It was quite shocking. And the bits in the insane asylum scared the ... out of me.As for the hero, I adored John Quinlan. Catherine loves Savitch and puts him in every single book, but John Quinlan is MY first love, and I wish he were in more of them!On the strength of this book, I went out and bought The Maze. It was so good I bought all of her other books! ... If you don't read anything else by Catherine Coulter, though, read this. It's worth your time!...

Published by Thriftbooks.com User , 20 years ago
I ordered this book from a book club back in high school, and I'm still not sick of it! (I read it at least twice a year) It was the first Catherine Coulter book I read, and I was immediately hooked! I recently read the rest of the series from the library, and while they were also awesome, this is still my favorite. I loved Sally and Quinlan; they were two of the best fiction characters I've ever read. The ending really creeped me out-who would have imagined?? But enough about that-if I say anymore I'll give it away... if you haven't read this book, it's a MUST-HAVE!!

Published by Thriftbooks.com User , 22 years ago
If you are looking for a mystery, with a little romance thrown in, pick up The Cove. It is the story of Sally Brainerd and FBI Special Agent James Quinlan. Get involved in the twists and turns of the mystery of who killed Amory St. John, Sally's dear papa. Learn about the history and the present as Sally knows it. Be ready for the many cases of the FBI that all connect at the end in a very unique way. I have read this book three times, I like to think of it as once for each mystery. I enjoyed it throughly. It is the first of Coulter's comtemporary books I have read, and I am looking forward to reading the rest of the "FBI" series, as I call them.

Romantic Suspense At Its Best!

Published by Thriftbooks.com User , 24 years ago
The Cove is a little town made up only of old folk who sell the World's Greatest Ice Cream. Everything is picture perfect. No potholes, no peeling paint, and flowers everywhere. Sally's Aunt Amabel lived in The Cove. It was to Amabel she ran when she escaped the mental institute. Everyone believed she had murdered her father and was insane. FBI Special Agent James Quinlan comes into town to find Sally. His cover is as a private investigator sent to check out the death of a couple of elderly tourist who had disappeared near The Cove three years before. He asked questions never knowing what he would uncover and how it indirectly linked to Sally. James soon realized that Sally was not crazy at all. But she IS the key to everything. ***The suspense, mysteries, and close calls are nonstop in this one! Catherine Coulter has turned me into a big fan! The Maze takes a subcharacter from this book and gives him his own story. I can hardly wait to read it. Ms Coulter, in my humble opinion, could very well be the Queen Of Romantic Suspense.***
Trustpilot
Copyright © 2022 Thriftbooks.com Terms of Use | Privacy Policy | Do Not Sell or Share My Personal Information | Accessibility Statement
ThriftBooks® and the ThriftBooks® logo are registered trademarks of Thrift Books Global, LLC