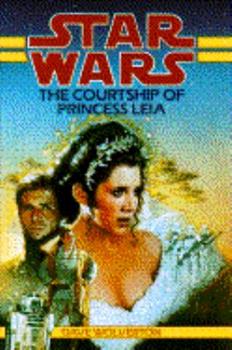 This description may be from another edition of this product. Seeking rich, powerful allies to bring into the Rebel Alliance and a new home planet for the refugees of her native Alderaan, Princess Leia considers a proposal that could tip the balance of power...

Dathomir and the Force Witches

Published by Thriftbooks.com User , 15 years ago
This story, while it's supposed to be centered on Han & Leia, was more worthwhile for it's descriptions of Dathomir and the Force witches. It also nicely wraps up the Zsinj story line, though I would have liked to seen it end with a bit more excitement. Isolder, the prince who is trying to win Leia's hand in marriage, is a good addition to the SW universe. And it's nice, after so many x-wing books with all brute and no use of the force, so see Luke Skywalker do what he does best. The author does a good job of writing Luke without making him seem too preachy. Overall, a good book. I would highly suggest it, as it is a nice ending to the X-Wing series and starts up the post Zsinj era. Good stuff and a quick read.

Published by Thriftbooks.com User , 16 years ago
I had a hard time getting into the New Republic books. Just couldn't find one that I was interested in. Until I read this one. I like the way that the characters kept their true identities. Some of the other books (Especially NJO) have distorted them somewhat. Han is still his usual cocky, overconfident self with one weakness...Leia. Luke is still his gentle, peaceloving self. Leia is as headstrong as ever. This book catches you from the start....Han is back from a long battle looking forward to his love, only to witness the horror of an arranged marraige to some prince in the name of peace! This is so much like Leia, to ditch her true love for the sake of the Republic (reminds you of her mother...doesn't it?) Well Han is not having that, but realizes in a very humbling moment that he doesn't really have anything to offer her except his heart, which will not help keep peace in the galaxy. Kidnapping her and taking her to his newly acquired planet from betting (remember, this is how he won the Mellinium Falcon, his most prized possesion)!. While on the planet, they run into a clan of witches who are very strong in the force. On this female dominated planet, Han, Luke and Isholder (Leia's New Beau) become slaves and the property of some of the clan sisters. Since Han has kidnapped the future queen of Hapan, half of the galaxy is is out to get his head (as usual). On the planet, they come across a clan of "good" witches and help them defeat the evil clan of "Nightsisters" synonomous with the Sith of the original Star Wars headed up by Gethzeroin, the ultimate evil witch that even had Palpatine running scared. Meanwhile Leia stopped tripping like she was actually going to marry that prince and went back to her man. Isholder picks up one of the witches to be his wife, despite the strenuous objection of his overbearing "Queen Mother". Overall, it does sound pretty "girly" so men may be reluctant to read it, but remember that Han is in it so it can't be that bad. Luke also stumbles across a collection of valuable information pertaining to the original Jedi order. However, unlike many of the Star Wars books, this one does have a true "happy" ending, which is atypical of the bittersweet endings that you may be used to.

Don't let the title mislead you...

Published by Thriftbooks.com User , 18 years ago
...into thinking this is a romance novel, Star Wars style.Summary:The novel starts off on Coruscant, with Leia welcoming an entourage from Hapes. Hapes and its other worlds, have plenty to offer to the newly formed Republic, 4 years after ROTJ. One surprise, is Prince Isolder, who wants Leia as his wife, and eventually the queen mother of Hapes. She starts to fall for him, and this makes Han very jealous. He wins a planet in a sabacc game, called Dathomir. He kidnaps Leia, and takes her here to try to win her back.This planet is orbited by Zsinj, a warlord from the remnants of the Empire. Han and Leia, along with Chewie and C-3PO crash land on the planet. They find that this planet has more than meets the eye. Luke comes searching for them, along with Isolder. The planet is full of surprises, including rancors, much larger than the one in ROTJ, that was in Jabba's palace. Even more dangerous are these witches, called the Nightsisters, who possess the Force, and use it for evil. Come to find out, the Emperor himself, was afraid of them. Leia and Han come in contact with a clan of good witches, called the Mountain Clan. This sets up a struggle between the two clans, with Leia, Han and Luke involved.Likes: So, not much courtship going on in this novel. This novel has everything I like in a SW novel, interesting, forbidden planet, involving the characters as much as can be expected, and good vs. evil. The evil being pretty strong in this one and Luke struggling with the Nightsisters.Dislikes: None.Finally: Make sure you get this for your SW novel collection.

Very Good, A little weird, but hey, its science fiction!

Published by Thriftbooks.com User , 19 years ago
This is probably up there with my favorite SW books. It's funny too. At first I thought Dave Wolverton was really insane, but now I realize the guy's a genious!!!!! I thought Luke was portrayed very, very well. He is probably my favorite character and some writers make him too stiff or serious. I mean he needs to have some fun too. The scene where he is talking with Isolder and his mother is a very funny one as well. Dathomir is awsome and the witches are way cool.One thing I didn't like so much was how Leia totally dropped Han Another problem I had with this book was that Han was so desperate. He has always been so cool and collected but going and kidnaping Leia and draging her off seems a little extereme. The last thing I have to say is thai book filled in something the movies and the Zahn books left open. That is when were Leia and Han married? Well read on!!!!!!(oh yeah, Recomended for everyone)MTFBWY'all

Published by Thriftbooks.com User , 20 years ago
Well, I have to say that I didn't expect to like this book nearly as much as I did, on acount of the somewhat irritating title. However, I was pleasantly surprised to find out that it was in fact an excellent book, one of the most entertaining Star Wars books I have read in a while. The writing was skilled, humourous, and portrayed everyone well, so that I felt as if I was there. Set four years after Return of the Jedi, in this book the sixty-three incredibally rich planets of the Hapes cluster say they will join the fledgling New Republic if Leia will marry the incredibally handsome Prince Isolder of the Hapes Cluster. She seriously considers it, and Han takes that to mean she doesn't love him anymore, so he kidnapps her to the planet Dathomir which he won in a card game, in the hopes that being alone with him will make her love him again. What he doesn't realize is that the planet is crawling with giant rancors and fierce warrior women who use men as slaves. Meanwhile, Luke and Isolder follow them to try and rescue Leia, and end up getting "captured" by Teneniel Djo, who is one of these warrior women, who decides to make Luke her slave/husband. As to how this mix-up is finally solved, well, you'll just have to read the book because I'm not telling! One problem I had with this book was that it seemed to skip over too many years between itself and The Truce at Bakura, and then expect me to know what was happening politically at that time. Just who is this Zsinj? Did I miss a book or something? He certainly wasn't mentioned in The Truce at Bakura which, as far as I know is the last book before this one. Anyway, back to good points. This book, I thought, portrayed all the characters with expertise, even Luke, who a lot of authors seem to have trouble with. Also, this book actually made me gain some interest in Han and Leia's relationship, which I previously ignored, since because Luke was always my favorite character I was always more interested in his relationships. (hint: Mara Jade) This book though, effectively brought out both of Han and Leia's hotheaded personalities, and very well illustrated the essencse of their often rocky relationship. Also, going back to Luke's relationships, his 'almost, sort of, mutual like' he had with Teneniel was something I found more funny than annoying and frustrating like I have found many of his other relationships. (Aka Gaeriel and Callista, (loud gagging noises)) I also knew from the beginning that Teneniel was going to end up with _______ because their daughter, Tenel Ka was one of the main characters in the series, Young Jedi Knights. Another thing I loved about this book was that Dathomir was such a cool planet. A planet full of warrior women who ride rancors and wield primitive weapons. Can it get any cooler? I doubt it! Anyway, I would recommend this book to any Star Wars fan, especially those who want to see how Han and Leia finally get married.
Copyright © 2020 Thriftbooks.com Terms of Use | Privacy Policy | Do Not Sell My Personal Information | Accessibility Statement
ThriftBooks® and the ThriftBooks® logo are registered trademarks of Thrift Books Global, LLC