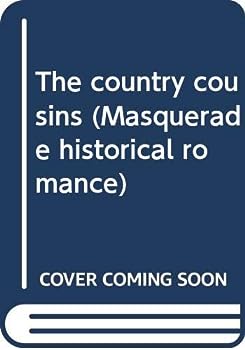 (Book #2 in the The Country Duo Series)

This description may be from another edition of this product. Cannons Grange was the perfect setting for a romantic adventure - and its handsome owner was suitably mysterious. Robert Hartwell seemed the perfect English gentleman. But why was he absent so...

Published by Thriftbooks.com User , 14 years ago
A female can easily meet with an accident... Canons Grange was the perfect setting for a romantic adventure-- and its handsome owner was suitably mysterious. Robert Hartwell seemed the perfect English gentleman. But why was he absent so frequently? Who were his midnight visitors. Where did he acquire military secrets? Such questions tormented Caroline. She must find the answers-- or forfeit any hope of happiness. She must know if the man she loved was a daring patriot-- or a ruthless traitor.

Published by Thriftbooks.com User , 19 years ago
Dinah Dean, who also wrote Masquerade (Mills & Boons historicals) as Marjorie May, wrote a marvellous series set in Russia that are now collectibles. She also wrote three romances set in England - The Cockermouth Mail (reviewed by me some months ago), The Country Gentleman, and The Country Cousins. The last two books are set in the same area, and somewhat related in that the hero and heroine of TCG appear as secondary characters late into TCC. TCC also links into her Russian series with a minor but important character who is the hero of one of her Russian books.First, a warning. This book is *not* easy to find. It is not as highly priced as suggested, but it is not one of Dean's more readily available books. I really don't know why this is so, but I thought I should warn any person reading this book.Dean's merits, as far as I am concerned, are the vivid realism of her settings (with detailed descriptions of the countryside, local problems, socio-economic issues, and of course, the houses and their interiors) coupled with believable and gentle plots with generally likeable plots. The Cockermouth Mail featured a story where the hero and heroine met on a stagecoach and ended up travelling together (along with other passengers). THE COUNTRY COUSINS begins in London, but moves rapidly down to its true setting.What is so unusual about this book? Perhaps the heroine, Caroline, who is the daughter of a City merchant (a Cit) who has married a lady from minor gentry. By marrying down, Caroline's mother has been cut off (or has cut herself off) from her old lifestyle, her friends and even her surviving relative, a sister who married upwards (by catching a baron). The story begins when this sister's stepson arrives at Caroline's home in the City on washing day (clearly a mistake). Caroline and her mother have mixed feelings about the invitation he offers to Caroline - she may come down to his country home to stay with his half-sister Julia. There is a family tragedy of sorts - Julia's parents (the baron and baroness) and her younger sister are trapped as prisoners in France following the rupture of the Peace of Amiens (1803), and Julia has grown up without them. What is worse, she is obviously on bad terms with her elder half-brother, a man whom Caroline does not like.In this book, we watch Caroline learning about country ways (including what a heifer is) and we watch her jumping to mistaken conclusions about certain people. All this takes place against the backdrop of the Napoleonic Wars (including the Portuguese campaign) which *is* discussed by the gentry - unlike the lack of such discussion in Austen's novels. As it happens, the course of the Portuguese campaign directed by Wellington will play a minor but important role in the plot.I cannot describe the novel much more without giving away some major spoilers. If you like a gentle well-written novel, with a woman developing an affection for a man she cannot quite trust for several reas
Copyright © 2020 Thriftbooks.com Terms of Use | Privacy Policy | Do Not Sell My Personal Information | Accessibility Statement
ThriftBooks® and the ThriftBooks® logo are registered trademarks of Thrift Books Global, LLC