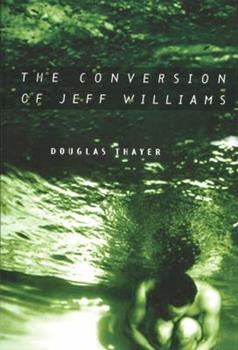 The Conversion of Jeff Williams

Provo is a world away from San Diego. In this topsy-turvy tale, it is the wealthy, religious, east-bench Provoans who enjoy the best that life can offer and share it with a less privileged, laid-back, So Cal teenager over one summer vacation. At first, Jeff Williams finds himself dazzled by east-bench affluence and faith. But as the summer progresses, events persuade him to rethink this religion-and-riches culture and to accept that the normal temptations...

Acquiring love from tragedy in preparing for a mission

Published by Thriftbooks.com User , 16 years ago
Once you start reading this book it's hard to stop. Douglas Thayer is a gifted writer and knows how to portray Mormon thought and action by boys just reaching maturity and contemplating missionary service in the church. I was once such a maturing LDS boy myself and was reminded of that fact as I read about Jeff and his cousin. In reading this book I greatly appreciated being able to relive what went through my own mind as I was striving for a testimony in getting ready for going on a mission. But there is one aspect of what I went through in growing up that does not play a part in the story of Jeff and Christopher. I would have liked to have seen such a gifted author as Thayer handle it, since it was a big factor in my own handling of it. I refer to my effort to get an orthodox Mormon testimony. While Jeff's thoughts can be described as centering on girls and cars, mine had more to do with testimony. I was growing up during the 1930s depression and for some reason did not worry very much either about cars or girls. In fact I never owned a car until several years after fulfill-ing my mission. Nor did I marry my wife for a couple of years after returning home from my mission. I cannot recall ever kissing a girl before dating my wife and the car came af-ter that. But I did have problems while preparing for my mission. I wanted an orthodox testimony and could not get one. In fact I started praying about obtaining such a testimony (using Moroni 10:1-3 and James 1: 5-6, 2:17) shortly after being baptized at the age of eight. I read the Book of Mormon as Jeff and Christopher did. But I saw in it much that made me question its historicity. For example in 2 Nephi 2:22, Lehi tells us in words as plain as can possibly be written that before Adam's transgression in the Garden of Eden nothing had died in this world - neither plants nor animals had tasted of death. Our scriptures date the transgression at about 6000 year ago. I had to ask myself, "How can this possibly be true? Where did all the fossils come from? What produced coal and how come the extinct dinosaurs disap-peared if no living thing could possibly die?" The Book of Mormon and the other Standard Works have many scriptures equally difficult to believe as being literally true. I wanted to go on a mission and did indeed do so, but not with an orthodox testimony. I came to question the historicity of many of our Standard Works and could not tell our investigators that these works were historical. I would have liked to see how Douglas Thayer could have treated the type of problem that I had as a maturing LDS boy preparing to go on a mission, but not being able to develop an orthodox testimony. My name is Glen Wade (Santa Barbara, CA)

Published by Thriftbooks.com User , 18 years ago
Douglas Thayer is one of the inventors of serious Mormon fiction. Thirty years ago he started writing perceptive, Chekhovian short stories that examined latter-day saints as human beings with foibles and quirks and who faced dilemnas in life that couldn't be neatly solved by the end of the story. He's a professor of English at Brigham Young University who is comfortable with the styles and techniques of modern American fiction. This is a rare novel from him, after many years. At first glance it appears odd that it would be published by the independent Signature Books, rather than a more conservative LDS publishing company like Deseret Book, but a careful, honest reading will reveal why Signature was the natural place for it.The hero is Jeff Williams, a California teenager who comes to Provo, Utah to spend the summer with his wealthy relatives and especially his cousin Christopher who has been battling serious illness. Thayer is gently satirical about life in Utah behind the "Zion Curtain"; there is a degree of culture shock that Thayer skillfully addresses, but there is great tenderness and love in his depiction of ordinary Mormon life. Jeff is a normal teenager with normal teenage male thoughts; that is, he thinks about girls, and cars. Eventually, tragedy rips through the family and causes Jeff to gain new perspective about his parents, his Provo cousins, and mortality. Thayer presents his themes of religious awakening very subtly, but in the end with great power. I can't think of a novel that displays with more accuracy "the Mormon world view" in a realistic contemporary setting. For Mormons, this life is only act two in a three-act play, and if we are listening carefully we will recieve hints from God about the previous act and the act to come. This is a fine, moving book that readers who are not LDS should find very enlightening.
Trustpilot
Copyright © 2022 Thriftbooks.com Terms of Use | Privacy Policy | Do Not Sell My Personal Information | Accessibility Statement
ThriftBooks® and the ThriftBooks® logo are registered trademarks of Thrift Books Global, LLC