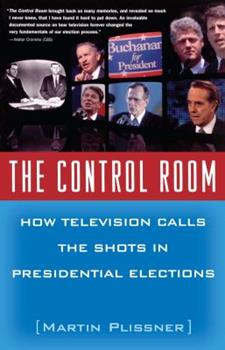 The Control Room: How Television Calls the Shots in Presidential Elections

Who will determine what Americans are thinking when they cast their votes in the year 2000? Martin Plissner, former political director of CBS News, has played a central role in the network coverage of every presidential campaign since 1964. In The Control Room, he shows how all the elements of our nation's greatest contest -- the primaries, the conventions, the counting of the ballots --are shaped by the networks' struggle for supremacy in today's...

Published by Thriftbooks.com User , 17 years ago
It's been a few years since I read "The Control Room," but as I remember it was wonderful reading, very easy to get through. Plissner worked for CBS over a span of several decades and witnessed first-hand the evolution of media coverage of the presidency. His anecdotes are invaluable and often hilarious.

Published by Thriftbooks.com User , 20 years ago
Martin Plissner is a veteran CBS political journalist who joined the network just as it was wresting the number one spot away from NBC's Chet Huntley-David Brinkley team with the avuncular, everybody's neighbor, Walter Cronkite, whose familiar folksiness achieved great success.Plissner talks about the atecedent event which, in additon to Cronkite's popularity, benefitted his network. It was CBS which, in 1962, initially forecast Richard M. Nixon's loss in the California governor's race against incument Edmund G. "Pat" Brown, beating Huntley and Brinkley to the punch.The informative Plissner does not just write about CBS triumphs. He mentions that the cautionary approach in 1976 that enabled the network to correctly forecast a Jimmy Carter victory in the highly competitive 1976 Wisconsin Democratic Presidential Primary after NBC and ABC had jumped the gun and called the race for early frontrunner, Congressman Morris Udall of Arizona, worked against the network four years later election night with the Carter-Reagan race. Walter Cronkite, calling his last presidential election, bowed out on an embarrassing note. Not wanting to risk an early misfire, as occurred with its competitors in 1976, CBS withheld its call. It did not put its seal on Ronald Reagan's decisive victory over Jimmy Carter until the incumbent president, influenced by the other two network calls, had conceded defeat.Plissner gives his own account of the rollicking Dan Rather live interview of George Bush during the 1988 primary campaign. Plissner finds it highly improbable that media claims of CBS planning to ambush Vice-President are valid. He maintains never having heard anything to this effect, leaving the impression that, had such a ploy been in the offing, he would have known. Plissner also notes that, given media concern about Bush's potential involvement in the Iran-Contra arms for hostages scandal, any responsible reporter would have questioned him in that area, as Rather did, arousing ire and prompting complaints on the Vice-President's part.Another point Plissner covers is the successful safety ploy on the part of the major parties to lock up party presidential nominations as far in advance of the convention as possible. He notes the unfortunate consequences of the process, a crowded early primary season followed by dull conventions and ennui until the fall battle has hopefully awakened citizen interest.

Published by Thriftbooks.com User , 21 years ago
Very adept account of how the medium of television can alter (and, sometimes even shape and define) the directions into which the various political candidates run their individual campaigns. Very interesting read. Very astute rundown of the intracasies, regarding the very unique partnership--between the individual campaigns and television--which has become the modern-day, run for the presidency (in America).
Trustpilot
Copyright © 2022 Thriftbooks.com Terms of Use | Privacy Policy | Do Not Sell My Personal Information | Accessibility Statement
ThriftBooks® and the ThriftBooks® logo are registered trademarks of Thrift Books Global, LLC