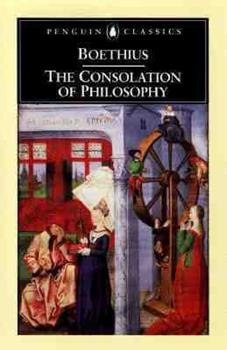 The Consolation of Philosophy

Boethius was an eminent public figure under the Gothic emperor Theodoric, and an exceptional Greek scholar. When he became involved in a conspiracy and was imprisoned in Pavia, it was to the Greek philosophers that he turned. The Consolation was written in the period leading up to his brutal execution. It is a dialogue of alternating prose and verse between the ailing prisoner and his 'nurse' Philosophy. Her instruction on the nature of fortune and...

Published by Thriftbooks.com User , 18 years ago
This is an account of the ability of the human mind to rise above a man's material failures and the external evils that assault him. Boethius (c 480-524 AD), a Roman scholar and philosopher/statesman, has led a life of privilege and influence. He has taken a stand of conscience in support of the integrity of the Roman senate and, in doing so, has taken a stand contrary to the designs of the Ostrogothic king Theodoric. He is imprisoned (and eventually executed), presumably for subversion or treason, on the strength of perjured testimony against him. Boethius laments his adverse 'fortunes' and has a vision in which a majestic woman appears to counsel him. She tells him "it is time for medicine rather than complaint," and that he suffers from "the common illness of deceived minds." Boethius recognizes her -- "I saw that she was Philosophy, my nurse, in whose house I had lived from my youth." The consolations that follow are structured in five books (i.e., chapters). In Book Two, Lady Philosophy examines the nature of the gifts of Fortune. These gifts of Fortune cannot be "good in themselves; whatever goodness is associated with them is to be found in the personal probity of those who happen to possess them." In Book Three, evil is seen as merely the absence of the Good, as Augustine of Hippo had earlier argued. In Book Four, the question of whether virtue is rewarded and evil is punished is examined. At first look it certainly appears that evil often succeeds. Here Providence is contrasted to Fate. For this reader, books three and four were rather weakly argued and tedious, although I am always reluctant to say this about a classic work such as this. The strengths of The Consolation are books 1, 2, and 5. Book Five is an excellent consideration of the determinism versus freedom problem. If goodness and evil are pre-assigned by Providence, then God cannot be omnibenevolent; in this view, God has willfully authored and imposed evil. There is no such thing as choice or judgment, no such thing as virtue, and all evil must be traced directly to a perverse divine evil. This is a pill that is almost impossible to swallow. It runs contrary to our ideas about God, it runs contrary to our common experiences for we do in fact exercise judgment, make choices, recognize virtue to be something quite at odds with vice. Goodness cannot be devoid of freedom, the Supreme Good cannot, by definition, deny the freedom of the human will. The problem is satisfactorily disposed by carefully considering the nature of Absolute knowledge and by not confusing it, as a flawed theology often does, with 'foreknowledge', a humanly impoverished idea not sufficient to describe the nature of knowledge for a temporally independent and omniscient Being. While the problematic idea of divine 'foreknowledge' suggests both temporal/spatial restraints ("fore") and fake choices, the idea of Absolute knowledge poses no obstacle for the freedom of the will or true omnipresence in both space an

Published by Thriftbooks.com User , 18 years ago
The particular edition I am reviewing is the Oxford World's Classics translation by P. G. Walsh. This is one of those classics that can catch an unsuspecting reader completely by surprise, especially if one has read many other works by near contemporaries. The circumstances under which it was composed are legendary, and lend the work a legitimacy granted to few other works. Boethius was among the foremost government officials in what was essentially the successor government to the end of the Roman Empire. Rome and much of the rest of what would later become Italy was under the control of the Ostrogoth king Theodoric. A product of one of the leading Roman familes, Boethius ascended to a power of great honor and authority under Theodoric, only to be accused of treason late in the latter's life, at which point Boethius was imprisoned and condemned to death. While awaiting his fate (including whether Theodoric actually intended on carrying out the sentence), Boethius wrote this remarkable dialog between a prisoner whose situation closely resembles Boethius' and Philosophy personified as a woman. Although many topics are discussed, the heart of the dialog is the nature of true happiness. Although few of its readers are likely to face circumstances as dire as Boethius', the work remains remarkably pertinent in an age where ideals of happiness are dictated almost entirely by our modern consumer society. Philosophy carefully explains to the prisoner that that happiness can never be found in such things as fame or power or riches and other things that are confused with the true source of happiness. For Boethius' Philosophy, happiness is ultimately rooted in the Christian God, but even for non-Christians, the lightly theological tone of the work provides much reflection on the nature of happiness in almost any kind of situation. The Walsh edition of this work is, in my opinion, the finest readily available edition in English. The notes are marvelous, both providing overviews to each upcoming section as well as providing detailed comments on specific lines in the text. The introduction gives any new reader of the work all the context and background that he or she would need to digest the work. Best of all, the translation is exceptionally readable, and the translations of the many poems far above the average for most academic translations of verse. I recommend this work strongly to either of two kinds of readers. First, for anyone who is a student of intellectual history the work remains for an understanding of a host of writers in the middle ages, as well as for many 19th century poets. Second, anyone interested in devotional or reflectional works, whether religious or philosophical, this remains one of the most essential works in the history of thought. By almost any standard, this is a work that demands careful reading and study.

Relihan's 'Consolation' Should Not Go Unoticed

Published by Thriftbooks.com User , 18 years ago
The Relihan translation emphasizes the philosophical depth of Boethius' Consolation, while faithfully and artfully reproducing the original beauty of his verse and the sublimity of its meaning. With this edition comes a detailed and informative introduction, along with exhaustive notes and a definitive glossary. Joel C. Relihan is one of the leading authorities in Boethian studies; his rendition of the Consolation is one that anyone serious about its study can hardly pass.

Boethius and The Consolation

Published by Thriftbooks.com User , 22 years ago
This is a must for any student of philosophy. Boethius is the transition from Roman and Neo-Platonic philosophy into the Medieval Period. I would also recommend this book to those facing doubt in their studies, or college students thinking of quitting. It is a short work, easy to read and great in its comfort."Be not overcome by your misfortunes, for the gifts of fortune are fleeting and happiness is not to be found in temporal goods. Only by being like God, who is the highest good, can lasting happiness come to man." Lady Philosophy counsels. Although the work is neo-Platonic Aristotle and Porphyry are heavily drawn from - so the advanced reader could consider those volumes too.
Trustpilot
Copyright © 2022 Thriftbooks.com Terms of Use | Privacy Policy | Do Not Sell My Personal Information | Cookie Preferences | Accessibility Statement
ThriftBooks® and the ThriftBooks® logo are registered trademarks of Thrift Books Global, LLC