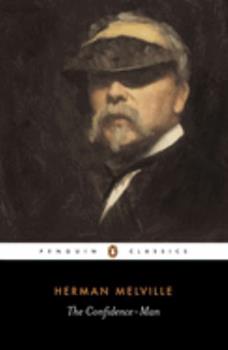 The Confidence-Man: His Masquerade

Onboard the Fid?le, a steamboat floating down the Mississippi to New Orleans, a confidence man sets out to defraud his fellow passengers. In quick succession he assumes numerous guises - from a legless beggar and a worldly businessman to a collector for charitable causes and a 'cosmopolitan' gentleman, who simply swindles a barber out of the price of a shave. Making very little from his hoaxes, the pleasure of trickery seems an end in itself for this...

The Confidence Game: From All Angles

Published by Thriftbooks.com User , 15 years ago
"The Confidence Man" was Melville's last novel. Like all his novels except "Moby Dick" it was a commercial failure. It is purported to be Melville's personal favorite of his own creation. Melville takes a very special position in this book. He is an active author who directly interacts with the reader. The book is especially intricate and disguised. Melville tried to show the `Confidence Game' from all angles. He illustrates those performing the game, those who are victims of the game, and those who are just side players in the game. In a brilliant fashion, Melville creates his text in such a way so as to leave the reader wondering just who is the player and who is the victim. He recognizes that his uniquely obtuse style in this book is particularly nebulous to the reader. In a technique that is rarely used by any author, Melville directly addresses the reader in two chapters. His words help the reader reach the conclusions that are elucidated. In the book, Melville seems to try to explain the essence of the Game; in a very interesting manner. He seems to be saying that `All people are seeking confidence. They are either seeking self-confidence, or they are seeking the confidence of others, or they are preying on other people's confidence.' With this basic premise, Melville shows how the Game is executed and how manipulative it can be. There is no lack of the psychological in this book. Melville writes almost exclusively about the mental machinations that are utilized to play the Game effectively. The book is highly recommended to those who are interested in the workings of the human mind and how those operations can be persuasive and even dangerous. It is a true classic in every sense of the word. It should not be overlooked.

Published by Thriftbooks.com User , 16 years ago
As I read this book, I didn't catch all the subtleties of it, and could never be precisely sure whether each confidence man was evil or not- it seemed ambiguous, or at least, the author never once allows the reader to find out definitively that the 'vicitms' are being gulled. However, by the end of the book, this becomes more clear as the second half settles into sxome extremely thought-provoking conversations and exchanges. After reading literary reviews online, the book in its totality makes even more sense as in retrospect its sublte points become clearer. That being said, the writing is absolutely superb. Although far more wordy than Hemingway, one cannot avoid comparing to Hemingway's writing, which, like this, is extremely controlled, restrained and pointed. As you read this, you cannot avoid the feeling that the author spent hours on each sentence. It is therefore very much so worth reading, but don't expect it to be easy. It's certainly not your verbose, nineteenth century romanctic glop, but it can be difficult, as some readers appear to have found it. But try it.

Published by Thriftbooks.com User , 21 years ago
With "The Confidence-Man," Melville offered a final novelistic expression of his hopes, doubts, and frustrations about the American nation on the verge of Civil War in the late 1850's. Many critics and reviewers take a negative point of view on this novel, saying that the narrative instability and episodic nature of the novel represents Melville's anger with the increasingly poor reception of his later novels, including the brilliant "Moby-Dick". Over the course of the novel's first half, we are presented with a string of characters who spout the virtues of charity and trust, all supposedly different manifestations of one Confidence-Man. The confidence-man engages passengers of the riverboat Fidele from St. Louis to New Orleans in philosophical, literary, personal, and business-related conversations. This is the heart of the novel, even in the second half, where only one confidence-man appears. As in Cervantes' "Don Quixote," you are able to tease out more about the ambiguous purposes of the novel through speeches rather than actions. At points amusing, horrifying, and sad, "The Confidence-Man" is difficult, if not impossible to categorize in any simple fashion. An extremely worthwhile read, especially if you read it as a prophetic work of the American Civil War and try to figure out for yourself if Melville thought things would turn out alright, or if the US was due for an apocalyptic judgment.

Skip Moby Dick and read this instead...

Published by Thriftbooks.com User , 21 years ago
OK, well maybe read "Moby Dick" too, but if you're going to read just one book by Melville, I suggest this one. Disregarded in Melville's lifetime, this book could have been written today...except that it exemplifies the cultural moment that produced it. Lyrical, magnificent, prescient, and wonderfully confusing, I'm on a personal mission to introduce this novel to as many people as possible.

Published by Thriftbooks.com User , 21 years ago
The Confidence Man is without question the most revolutionary work of nineteenth century fiction--enormously experimental, provocative and simply bizarre. The experimentations with flatenned characterizations; the episodic, even repetitive plot structure; and the sheer power of its hallucinatory narration make this novel a post-modern work before there was even modernism. Greatly ignored in its own day, and for much of ours, the Confidence Man is central to an understanding of narrative history and the evolution of this tortured genius who, after his novel Pierre, seems to have transformed narrative conventions in a way that few readers have ever grasped. A brilliant, absolutely central work that makes the much-lauded experimentations of near-contemporary American writers seem puny by comparison.
Copyright © 2020 Thriftbooks.com Terms of Use | Privacy Policy | Do Not Sell My Personal Information | Accessibility Statement
ThriftBooks® and the ThriftBooks® logo are registered trademarks of Thrift Books Global, LLC